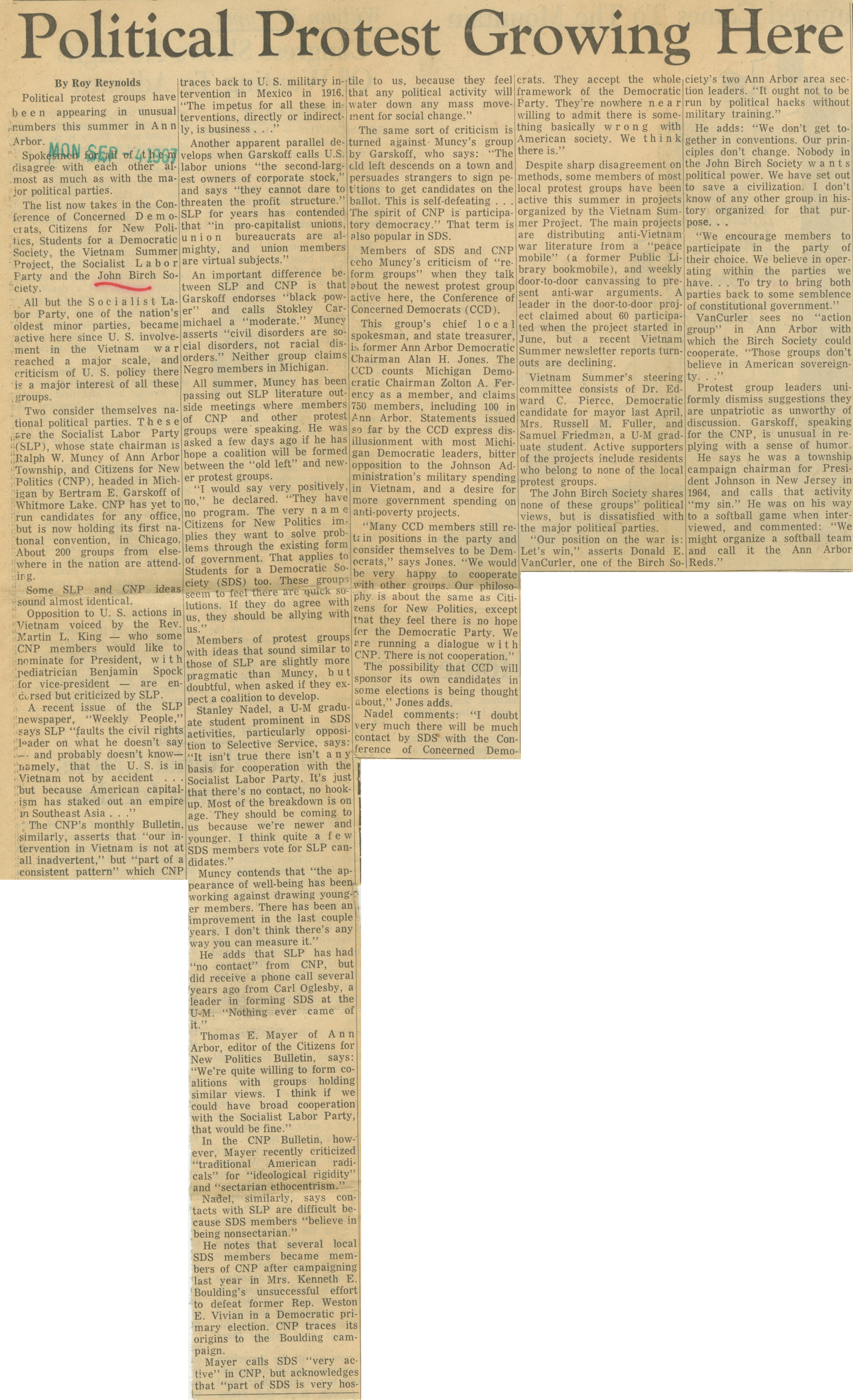 Political protest groups have been appearing in unusual numbers this summer in Ann Arbor.

Spokesmen for all of them disagree almost as much as with the major political parties.

The list now takes in the Conference of Concerned Democrats, Citizens for New Politics, Students for a Democratic Society, the Vietnam Summer Project, the Socialist Labor Party and the John Birch Society.

All but the Socialist Labor Party, one of the nation’s oldest minor parties, became active here since U.S. involvement in the Vietnam war reached a major scale, and criticism of U.S. policy there is a major interest of all these groups.

Two consider themselves national political parties. These are the Socialist Labor Party (SLP), whose state chairman is Ralph W. Muncy of Ann Arbor Township, and Citizens for New Politics (CNP), headed in Michigan by Bertram E. Garskoff of Whitmore Lake. CNP has yet to run candidates for any office, but is now holding its first national convention, in Chicago. About 200 groups from elsewhere in the nation are attending.

Opposition to U.S. actions in Vietnam voiced by the Rev. Martin L. King -- who some CNP members would like to nominate for President, pediatrician Benjamin Spock for vice-president -- are endorsed but criticized by SLP.

A recent issue of the SLP newspaper, “Weekly People,” says SLP “faults the civil rights leader on what he doesn’t say -- and probably doesn’t know -- namely, that the U. S. is in Vietnam not by accident ... but because American capitalism has staked out an empire in Southeast Asia ...”

The CNP's monthly Bulletin, similarly, asserts that “our intervention in Vietnam is not at all inadvertent,” but “part of consistent pattern” which CNP traces back to U. S. military intervention in Mexico in 1916. "The impetus for all these interventions, directly or indirectly, is business ...”

Another apparent parallel develops when Garskoff calls U.S. labor unions “the second-largest owners of corporate stock,’’ and says “they cannot dare to threaten the profit structure." SLP for years has contended that "in pro-capitalist unions, union bureaucrats are almighty, and union members are virtual subjects."

An important difference between SLP and CNP is that Garskoff endorses "black power" and calls Stokley Carmichael a "moderate." Muncy asserts "civil disorders are social disorders, not racial disorders." Neither group claims Negro members in Michigan.

All summer, Muncy has been passing out SLP literature outside meetings where members of CNP and other protest groups were speaking. He was asked a few days ago if he has hope a coalition will be formed between the “old left” and newer protest groups.

"I would say very positively," he declared. “They have no program. The very name Citizens for New Politics implies they want to solve problems through the existing form of government. That applies to Students for a Democratic Society (SDS) too. These groups seem to feel there are quick solutions. If they do agree with us, they should be allying with us."

Members of protest groups with ideas that sound similar to those of SLP are slightly more pragmatic than Muncy, but doubtful, when asked if they expect a coalition to develop.

Stanley Nadel, a U-M graduate student prominent in SDS activities, particularly opposition to Selective Service, says: "It isn't true there isn't any basis for cooperation with the Socialist Labor Party. It's just that there's no contact, no hookup. Most of the breakdown is on age. They should be coming to us because we're newer and younger. I think quite a few SDS members vote for SLP candidates."

Muncy contends that “the appearance of well-being has been working against drawing younger members. There has been an improvement in the last couple years. I don’t think there’s any way you can measure it.”

He adds that SLP has had “no contact” from CNP, but did receive a phone call several years ago from Carl Oglesby, a leader in forming SDS at the U-M. “Nothing ever came of it."

Thomas E. Mayer of Ann Arbor, editor of the Citizens for New Politics Bulletin, says: “We’re quite willing to form coalitions with groups holding similar views. I think if we could have broad cooperation with the Socialist Labor Party, that would be fine.”

Nadel, similarly, says contacts with SLP are difficult because SDS members "believe in being nonsectarian.”

Mayer calls SDS “very active” in CNP, but acknowledges that “part of SDS is very hostile to us, because they feel that any political activity will water down any mass movement for social change."

The same sort of criticism is turned against Muncy’s group by Garskoff, who says: “The old left descends on a town and persuades strangers to sign petitions to get candidates on the ballot. This is self-defeating ... The spirit of CNP is participatory democracy." That term is also popular in SDS.

Members of SDS and CNP echo Muncy’s criticism of "reform groups” when they talk about the newest protest group active here, the Conference of Concerned Democrats (CCD).

“Many CCD members still retain positions in the party and consider themselves to be Democrats,” says Jones. “We would be very happy to cooperate with other groups. Our philosophy is about the same as Citizens for New Politics, except that they feel there is no hope for the Democratic Party. We are running a dialogue with CNP. There is not cooperation."

"The possibility that CCD will sponsor its own candidates in some elections is being thought about," Jones adds.

Nadel comments: "I doubt very much there will be much contact by SDS with the Conference of Concerned Democrats. They accept the whole framework of the Democratic Party. They're nowhere near willing to admit there is something basically wrong with American society. We think there is."

Despite sharp disagreement on methods, some members have been active this summer in projects organized by the Vietnam Summer Project. The main projects are distributing anti-Vietnam literature from a "peace mobile” (a former Public Library bookmobile), and weekly door-to-door canvassing to present anti-war arguments. A leader in the door-to-door project claimed about 60 participated when the project started in June, but a recent Vietnam Summer newsletter reports turnouts are declining.

The John Birch Society shares none of these groups’’ political views, but is dissatisfied with the major political parties.

“Our position on the war is: Let's win,” asserts Donald E. VanCurler, one of the Birch Society’s two Ann Arbor area section leaders. "It ought not to be run by political hacks without military training.”

He adds: “We don’t get together in conventions. Our principles don’t change. Nobody in the John Birch Society wants political power. We have set out to save a civilization. I don’t know of any other group in history organized for that purpose ...

"We encourage members to participate in the party of their choice. We believe in operating within the parties we have ... To try to bring both parties back to some semblance of constitutional government.”

VanCurler sees no “action group” in Ann Arbor with which the Birch Society could cooperate. “Those groups don’t believe in American sovereignty ...”

Protest group leaders uniformly dismiss suggestions they are unpatriotic as unworthy of discussion. Garskoff, speaking for the CNP, is unusual in replying with a sense of humor.

He says he was a township campaign chairman for President Johnson in New Jersey in 1964, and calls that activity "my sin.” He was on his way to a softball game when interviewed, and commented: “We might organize a softball team and call it the Ann Arbor Reds.”