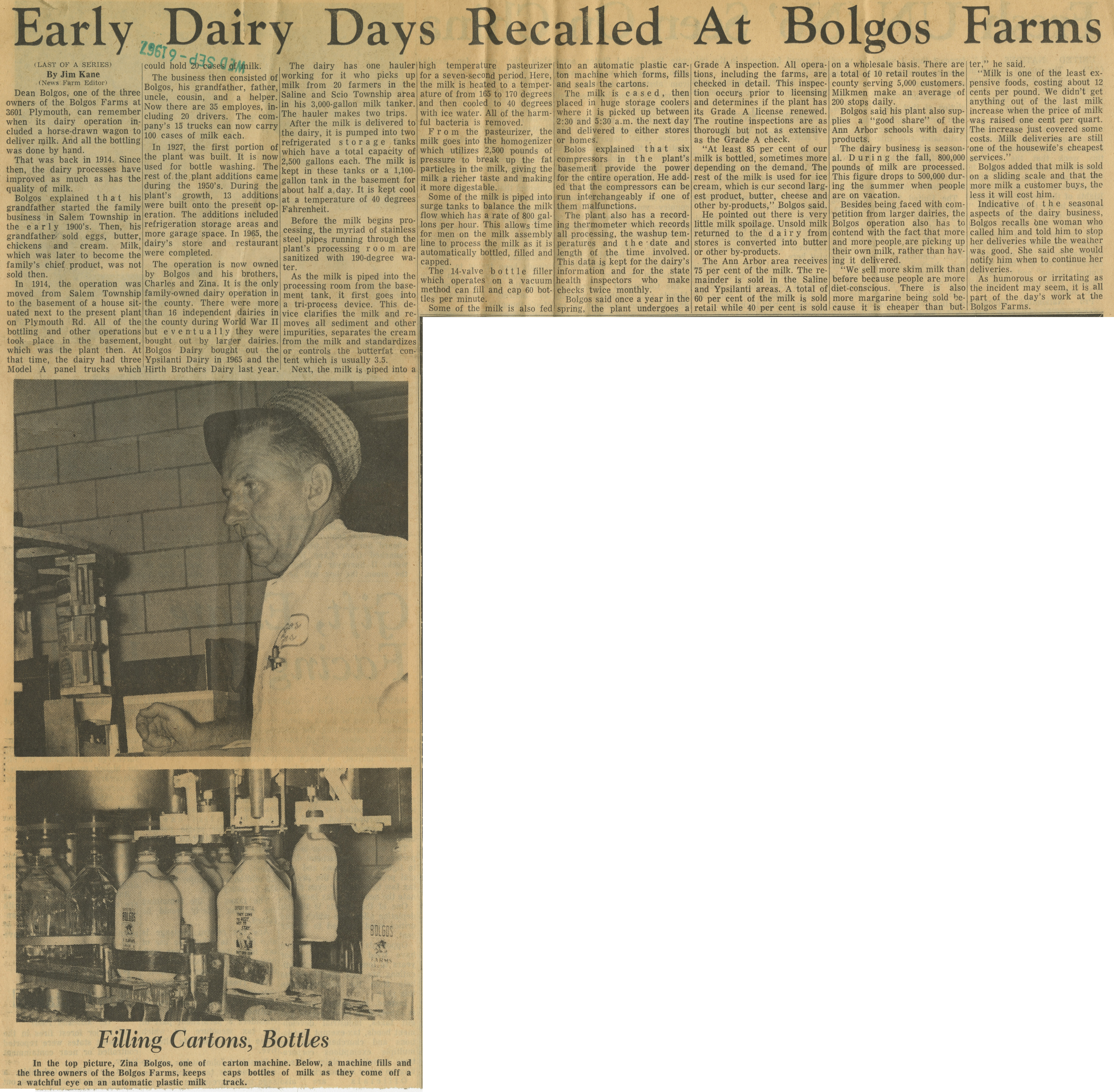 Dean Bolgos, one of the three owners of the Bolgos Farms at 3601 Plymouth, can remember when its dairy operation included a horse-drawn wagon to deliver milk. And all the bottling was done by hand.

That was back in 1914. Since then, the dairy processes have improved as much as has the quality of milk.

Bolgos explained that his grandfather started the family business in Salem Township in the early 1900’s. Then, his grandfather sold eggs, butter, chickens, and cream. Milk, which was later to become the family’s chief product, was not sold then.

In 1914, the operation was moved from Salem Township to the basement of a house situated next to the present plant on Plymouth Rd. All of the bottling and other operations took place in the basement, which was the plant then. At that time, the dairy had three Model A panel trucks which could hold 20 cases of milk.

The business then consisted of Bolgos, his grandfather, father, uncle, cousin, and a helper. Now there are 35 employees, including 20 drivers. The company’s 15 trucks can now carry 10 cases of milk each.

In 1927, the first portion of the plant was built. It is now used for bottle washing. The rest of the plant additions came during the 1950’s. During the plant's growth, 13 additions built onto the present operation. The additions included refrigeration storage areas and garage space. In 1965, the dairy's store and restaurant were completed.

The operation is now owned by Bolgos and his brothers, Charles and Zina. It is the only family-owned dairy operation in the county. There were more than 16 independent dairies the county during World War II but eventually they were bought out by larger dairies. Bolgos Dairy bought out the Ypsilanti Dairy in 1965 and the Hirth Brothers Dairy last year.

The dairy has one hauler working for it who picks up milk from 20 farmers in the Saline and Scio Township area in his 3,000-gallon milk tanker. The hauler makes two trips.

After the milk is delivered to the dairy, it is pumped into two refrigerated storage tanks which have a total capacity of 2,500 gallons each. The milk is kept in these tanks or a 1,100-gallon tank in the basement for about half a day. It is kept cool temperature of 40 degrees Fahrenheit.

Before the milk begins processing, the myriad of stainless steel pipes running through the plant's processing room are sanitized with 190-degree water.

As the milk is piped into the processing room from the basement tank, it first goes into a tri-process device. This device clarifies the milk and removes all sediment and other impurities, separates the cream from the milk and standardizes or controls the butterfat content which is usually 3.5.

Next, the milk is piped into a high temperature pasteurizer for a seven-secoid period. Here, the milk is heated to a temperature of from 165 to 170 degrees and then cooled to 40 degrees with ice water. All of the harmful bacteria is removed.

From the pasteurizer, the milk goes into the homogenizer which utilizes 2,500 pounds of pressure to break up the fat particles in the milk, giving the milk a richer taste and making it more digestible.

Some of the milk is piped into surge tanks to balance the milk flow which has a rate of 800 gallons per hour. This allows time for men on the milk assembly line to process the milk as it is automatically bottled, filled and capped.

The 14-valve bottle filler which operates on a vacuum method can fill and cap 60 bottles per minute.

Some of the milk is also fed into an automatic plastic carton machine which forms, fills and seals the cartons.

The milk is cased, then placed in huge storage coolers where it is picked up between 2:30 and 5:30 a.m. the next day and delivered to either stores or homes.

Bolos explained that six compressors in the plant’s basement provide the power for the entire operation. He added that the compressors can be run interchangeably if one of them malfunctions.

The plant also has a recording thermometer which records all processing, the washup temperatures, and the date and length of the time involved. This data is kept for the dairy’s information and for the state health inspectors who make - checks twice monthly.

Bolgos said once a year in the spring, the plant undergoes a Grade A inspection. All operations, including the farms, are checked in detail. This inspection occurs prior to licensing and determines if the plant has its Grade A license renewed. The routine inspections are as thorough but not as extensive as the Grade A check.

“At least 85 per cent of milk is bottled, sometimes more depending on the demand. The rest of the milk is used for ice cream, which is our second largest product, butter, cheese and other by-products,” Bolgos said.

He pointed out there is very little milk spoilage. Unsold milk returned to the dairy from stores is converted into butter or other by-products.

The Ann Arbor area receives 75 per cent of the milk. The remainder is sold in the Saline and Ypsilanti areas. A total of 60 per cent of the milk is sold retail while 40 per cent is sold on a wholesale basis. There are a total of 10 retail routes in the county serving 5,000 customers. Milkmen make an average of 200 stops daily.

The dairy business is seasonal. During the fall, 800,000 pounds of milk are processed. This figure drops to 500,000 during the summer when people are on vacation.

Besides being faced with competition from larger dairies, the Bolgos operation also has to contend with the fact that more and more people.are picking up their own milk, rather than having it delivered.

“We sell more skim milk than before because people are more diet-conscious. There is also more margarine being sold because it is cheaper than butter,” he said.

“Milk is one of the least expensive foods, costing about 12 cents per pound. We didn’t get anything out of the last milk increase when the price of milk was raised one cent per quart. The increase just covered some costs. Milk deliveries are still one of the housewife’s cheapest services.”

Bolgos added that milk is sold on a sliding scale and that the more milk a customer buys, the less it will cost him.

Indicative of the seasonal aspects of the dairy business, Bolgos recalls one woman who called him and told him to stop her deliveries while the weather was good. She said she would notify him when to continue her deliveries.

As humorous or irritating as the incident may seem, it is all part of the day’s work at the Bolgos Farms.

In the top picture, Zina Bolgos, one of the three owners of the Bolgos Farms, keeps a watchful eye on an automatic plastic milk carton machine. Below, a machine fills and caps bottles of milk as they come off a track.