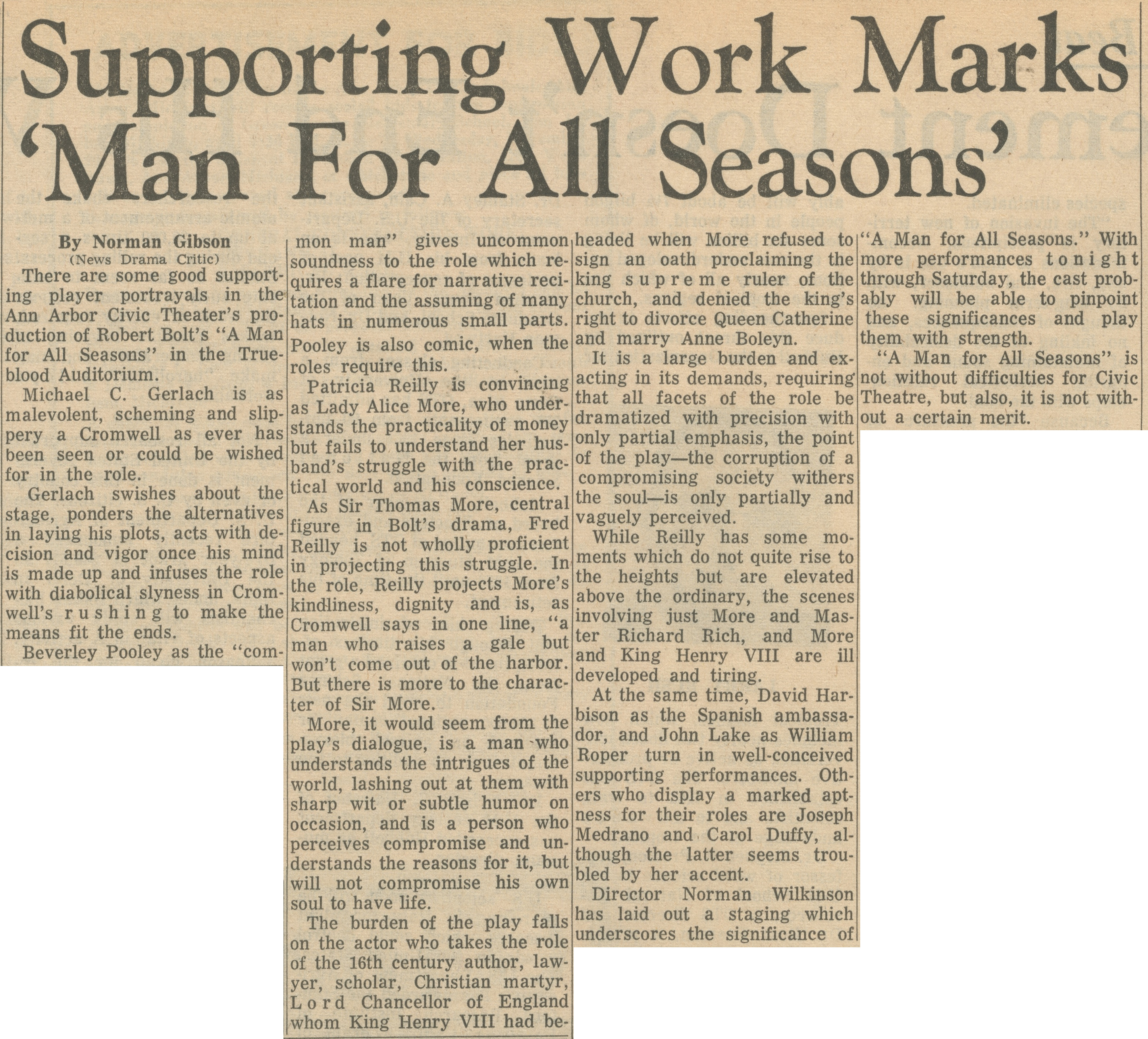 There are some good supporting player portrayals in the Ann Arbor Civic Theater’s production of Robert Bolt’s “A Man for All Seasons” in the Trueblood Auditorium.

Michael C. Gerlach is as malevolent, scheming and slippery a Cromwell as ever has been seen or could be wished for in the role.

Gerlach swishes about the stage, ponders the alternatives in laying his plots, acts with decision and vigor once his mind is made up and infuses the role with diabolical slyness in Cromwell’s rushing to make the means fit the ends.

Beverley Pooley as the “common man” gives uncommon soundness to the role which requires a flare for narrative recitation and the assuming of many hats in numerous small parts. Pooley is also comic, when the roles require this.

Patricia Reilly is convincing as Lady Alice More, who understands the practicality of money but fails to understand her husband’s struggle with the practical world and his conscience.

As Sir Thomas More, central figure in Bolt’s drama, Fred Reilly is not wholly proficient projecting this struggle. In the role, Reilly projects More’ kindliness, dignity and is, as Cromwell says in one line, man who raises a gale but won’t come out of the harbor. But there is more to the character of Sir More.

More, it would seem from the play’s dialogue, is a man who understands the intrigues of the world, lashing out at them with sharp wit or subtle humor on occasion, and is a person who perceives compromise and understands the reasons for it, but will not compromise his own soul to have life.

The burden of the play falls on the actor who takes the role of the 16th century author, lawyer, scholar, Christian martyr, Lord Chancellor of England whom King Henry VIII had beheaded when More refused to sign an oath proclaiming the king supreme ruler of the church, and denied the king’s right to divorce Queen Catherine and marry Anne Boleyn.

It is a large burden and exacting in its demands, requiring that all facets of the role be dramatized with precision with only partial emphasis, the point of the play—the corruption of a compromising society withers the soul—is only partially and vaguely perceived.

While Reilly has some moments which do not quite rise to the heights but are elevated above the ordinary, the scenes involving just More and Master Richard Rich, and More and King Henry VIII are ill developed and tiring.

At the same time, David Harbison as the Spanish ambassador, and John Lake as William Roper turn in well-conceived supporting performances. Others who display a marked aptness for their roles are Joseph Medrano and Carol Duffy, although the latter seems troubled by her accent.

Director Norman Wilkinson has laid out a staging which underscores the significance of “A Man for All Seasons.” With more performances tonight through Saturday, the cast probably will be able to pinpoint these significances and play them with strength.