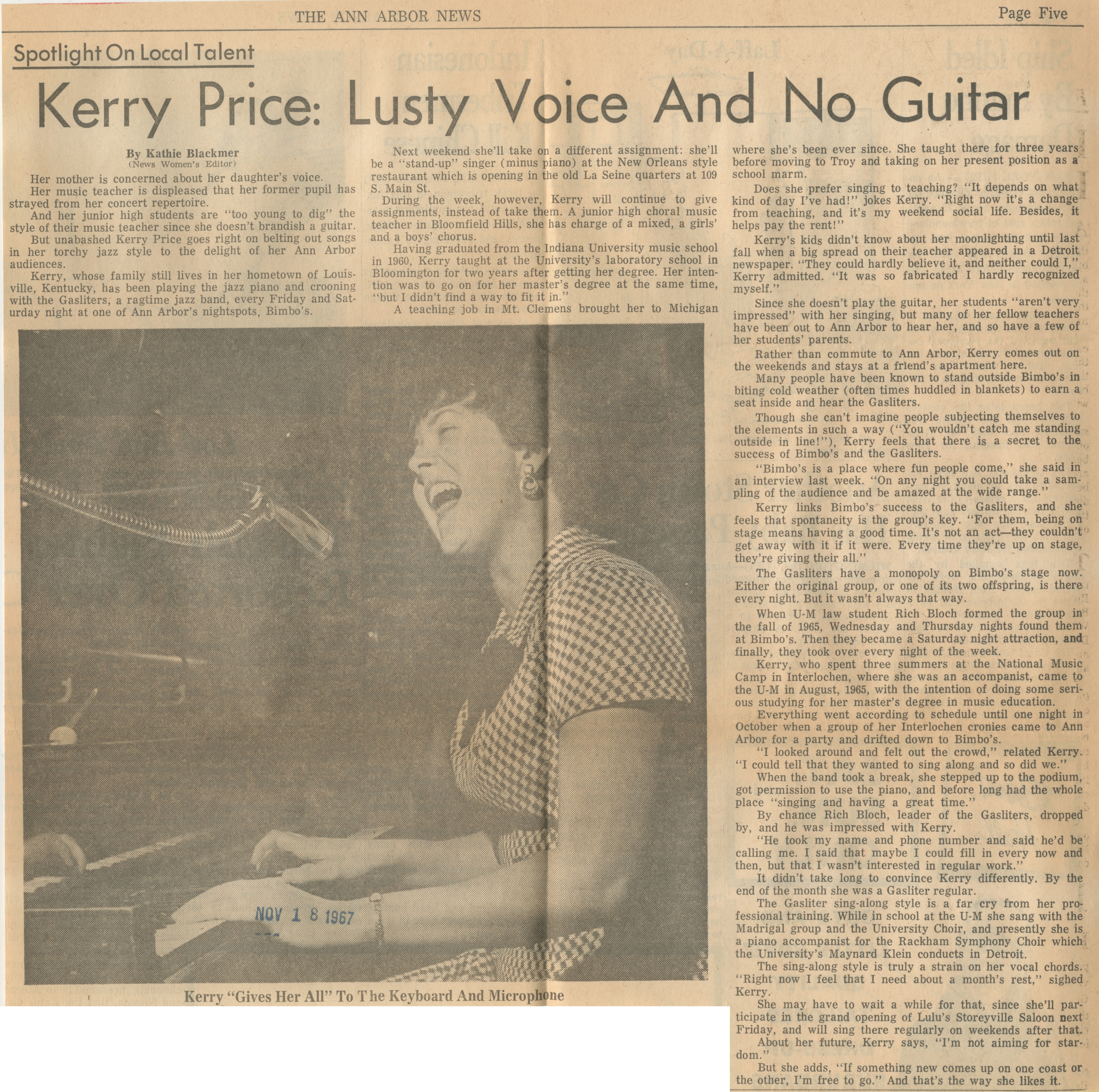 Her mother is concerned about her daughter's voice. Her music teacher is displeased that her former pupil has strayed from her concert repertoire. And her junior high students are "too young to dig" the style of their music teacher since she doesn't brandish a guitar. But unabashed Kerry Price goes right on belting out songs in her torchy jazz style to the delight of her Ann Arbor audiences. Kerry, whose family still lives in her hometown of Louisvillè, Kentucky, has been playing the jazz piano and crooning with the Gasliters, a ragtime jazz band, every Friday and Saturday night at one of Ann Arbor's nightspots, Bimbo's. Next weekend she'll take on a different assignment: she'll' be a "stand-up" singer (minus piano) at the New Orleans style, restaurant which is opening in the old La Seine quarters at 109 S. Main St. During the week, however, Kerry will continue to give I assignments, instead of take them. A junior high choral music; teacher in Bloomfield Hills, she has charge of a mixed, a girls'y and a boys' chorus. Having graduated from the Indiana University music school in 1960, Kerry taught at the University 's laboratory school in Bloomington for two years after getting her degree. Her intention was to go on for her master's degree at the same time, "but I didn't find a way to fit it in." A teaching, job in Mt. Clemens brought her to Michigan where she's been ever since. She taught there for three years before moving to Troy and taking on her present position as a school marm. Does she prefer singing to teaching? "It depends on what kind of day I've had!" jokes Kerry. "Right now it's a change from teaching, and it's my weekend social life. Besides, it helps pay the rent!" Kerry's kids didn't know about her moonlighting until last fall when a big spread on their teacher appeared in a Detroit newspaper. "They could hardly believe it, and neither could I," Kerry admitted. "It was so fabricated I hardly recognized myself." Since she doesn't play the guitar, her students "aren't very impressed" with her singing, but many of her fellow teachers have been out to Ann Arbor to hear her, and so have a few of her students' parents. Rather than commute to Ann Arbor, Kerry comes out on the weekends and stays at a frlend's apartment here. Many people have been known to stand outside Bimbo's in biting cold weather (often times huddled in blankets) to earn a seat inside and hear the Gasliters. Though she can't imagine people subjecting themselves to the elements in such a way ("You wouldn't catch me standing outside in line!"), Kerry feels that there is a secret to the success of Bimbo's and the Gasliters. "Bimbo's is a place where fun people come," she said in an interview last week. "On any night you could take a sampling of the audience and be amazed at the wide range." Kerry links Bimbo's success to the Gasliters, and she feels that spontaneity is the group's key. "For them, being oii stage means having a good time. It's not an act- they couldn't get away with it if it were. Every time they're up on stage they're giving their all." The Gasliters have a monopoly on Bimbo's stage now,; Either the original group, or one of its two offspring, is there every night. But it wasn't always that way. When U-M law student Rich Bloch formed the group in: the fall of 1965, Wednesday and Thursday nights found thenï. at Bimbo's. Then they became a Saturday night attraction, and finally, they took over every night of the week. Kerry, who spent three summers at the National Music Camp in Interlochen, where she was an accompanist, came to the U-M in August, 1965, with the intention of doing some serious studying for her master's degree in music education. Everything went according to schedule until one night in October when a group of her Interlochen cronies came to Ann Arbor for a party and drifted down to Bimbo's. "I looked around and feit out the crowd," related Kerry. "I could teil that they wanted to sing along and so did we." When the band took a break, she stepped up to the podium, got permission to use the piano, and before long had the whole place "singing and having a.great time." By chance Rich Bloch, leader of the Gasliters, dropped by, and he was impressed with Kerry. "He took my name and phone number and said he'd be calling me. I said that maybe I could fill in every now and then, but that I wasn't interested in regular work." It didn't take long to convince Kerry differently. By the end of the month she was a Gasliter regular. The Gasliter sing-along style is a far cry from her professional training. While in school at the U-M she sang with the Madrigal group and the University Choir, and presently she is a piano accompanist for the Rackham Symphony Choir which the University's Maynard Klein conducís in Detroit. The sing-along style is truly a strain on her vocal chords. "Right now I feel that I need about a month's rest," sighed Kerry. She may have to wait a while for that, since she'll particípate in the grand opening of Lulu's Storeyville Saloon next Friday, and will sing there regularly on weekends after that. About her future, Kerry says, "I'm not aiming for stardom." But she adds, "If something new comes up on one coast or the other, I'm free to go." And that's the way she likes it.