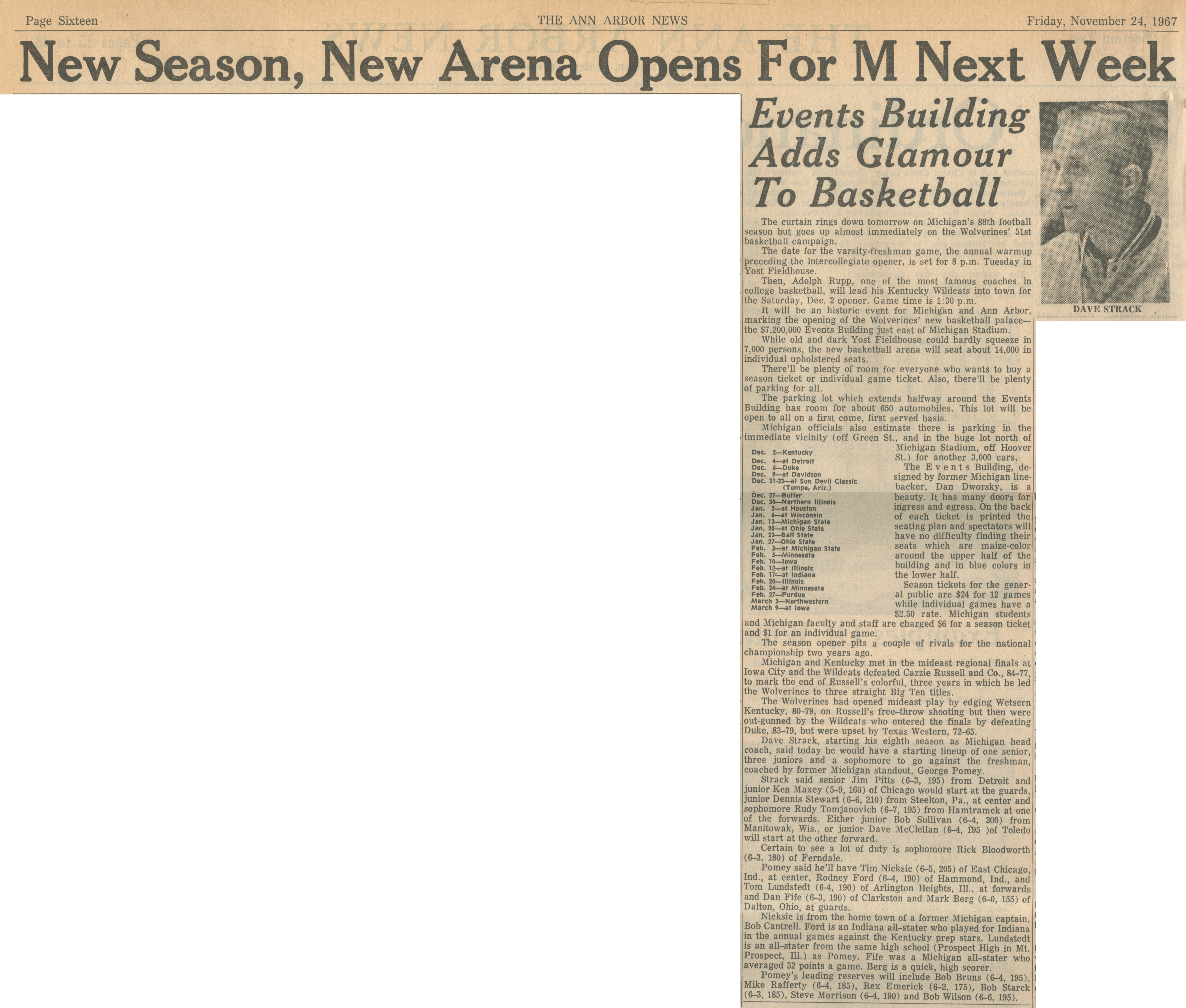 The curtain rings down tomorrow on Michigan’s 88th football season but goes up almost immediately on the Wolverines’ 51st basketball campaign.

The date for the varsity-freshman game, the annual warmup preceding the intercollegiate opener, is set for 8 p.m. Tuesday in Yost Fieldhouse.

Then, Adolph Rupp, one of the most famous coaches in college basketball, will lead his Kentucky Wildcats into town for the Saturday, Dec. 2 opener. Game time is 1:30 p.m.

It will be an historic event for Michigan and Ann Arbor, marking the opening of the Wolverines’ new basketball palace—the $7,200,000 Events Building just east of Michigan Stadium.

While old and dark Yost Fieldhouse could hardly squeeze in 7,000 persons, the new basketball arena will seat about 14,000 individual upholstered seats.

The parking lot which extends halfway around the Events Building has room for about 650 automobiles. This lot will be open to all on a first come, first served basis.

Michigan officials also estimate there is parking in the immediate vicinity (off Green St., and in the huge lot north of Michigan Stadium, off Hoover St.) for another 3,000 cars.

The Events Building, designed by former Michigan linebacker, Dan Dworsky, is a beauty. It has many doors for ingress and egress. On the back of each ticket is printed the seating plan and spectators will have no difficulty finding their seats which are maize-color around the upper half of the building and in blue colors in the lower half.

The season opener pits a couple of rivals for the national championship two years ago.

Michigan and Kentucky met in the mideast regional finals at Iowa City and the Wildcats defeated Cazzie Russell and Co., 84-77, to mark the end of Russell’s colorful, three years in which he led the Wolverines to three straight Big Ten titles.

The Wolverines had opened mideast play by edging Western Kentucky, 80-79, on Russell’s free-throw shooting but then were out-gunned by the Wildcats who entered the finals by defeating Duke, 83-79, but were upset by Texas Western, 72-65.

Dave Strack, starting his eighth season as Michigan head coach, said today he would have a starting lineup of one senior, three juniors and a sophomore to go against the freshman, coached by former Michigan standout, George Pomey.

Certain to see a lot of duty is sophomore Rick Bloodworth (6-3, 180) of Ferndale.

Nicksic is from the home town of a former Michigan captain, Bob Cantrell. Ford is an Indiana all-stater who played for Indiana in the annual games against the Kentucky prep stars. Lundstedt is an all-stater from the same high school (Prospect High in Mt. Prospect, Ill.) as Pomey. Fife was a Michigan all-stater who averaged 32 points a game. Berg is a quick, high scorer.