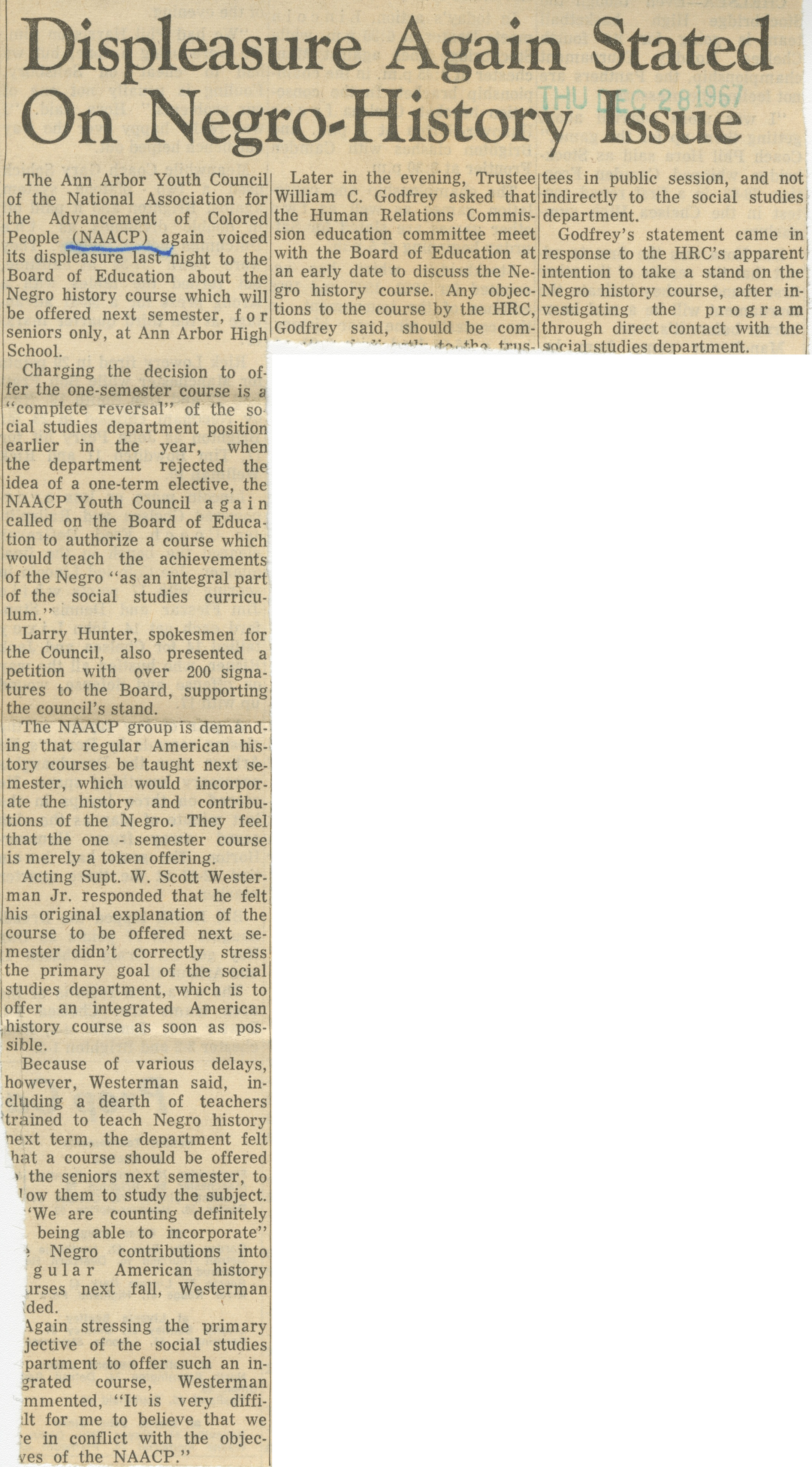 ﻿Displeasure Again Stated On Negro-History Issue
The Ann Arbor Youth Council of the National Association for the Advancement of Colored People (NAACP) again voiced its displeasure to the Board of Education about the Negro history course which will be offered next semester, for seniors only, at Ann Arbor High School
tees in public session, and not indirectly to the social studies department.

Charging the decision to offer the one-semester course is a “complete reversal” of the social studies department position earlier in the year, when the department rejected the idea of a one-term elective, the NAACP Youth Council again called on the Board of Education to authorize a course which would teach the achievements of the Negro “as an integral part of the social studies curriculum.”

Larry Hunter, spokesmen for the Council, also presented a petition with over 200 signatures to the Board, supporting the council's stand.

The NAACP group is demanding that regular American history courses be taught next semester, which would incorporate the history and contributions of the Negro. They feel that the one - semester course is merely a token offering.

Acting Supt. W. Scott Westerman Jr. responded that he felt his original explanation of the course to be offered next semester didn’t correctly stress the primary goal of the social studies department, which is to offer an integrated American history course as soon as possible.

Because of various delays, however, Westerman said, including a dearth of teachers trained to teach Negro history next term, the department felt that a course should be offered the seniors next semester, to allow them to study the subject.

“We are counting definitely being able to incorporate” Negro contributions into regular American history courses next fall, Westerman added.

Again stressing the primary objective of the social studies department to offer such an in-tegrated course. Westerman commented, “It is very difficult for me to believe that we are in conflict with the objectives of the NAACP.”

Later in the evening, Trustee William C. Godfrey asked that the Human Relations Commission education committee meet with the Board of Education at an early date to discuss the Negro history course. Any objections to the course by the HRC, Godfrey said, should be [illegible] to the trustees in public sessions, and not indirectly to the social studies department.

Godfrey’s statement came in response to the HRC’s apparent intention to take a stand on the Negro history course, after investigating the program through direct contact with the social studies department.