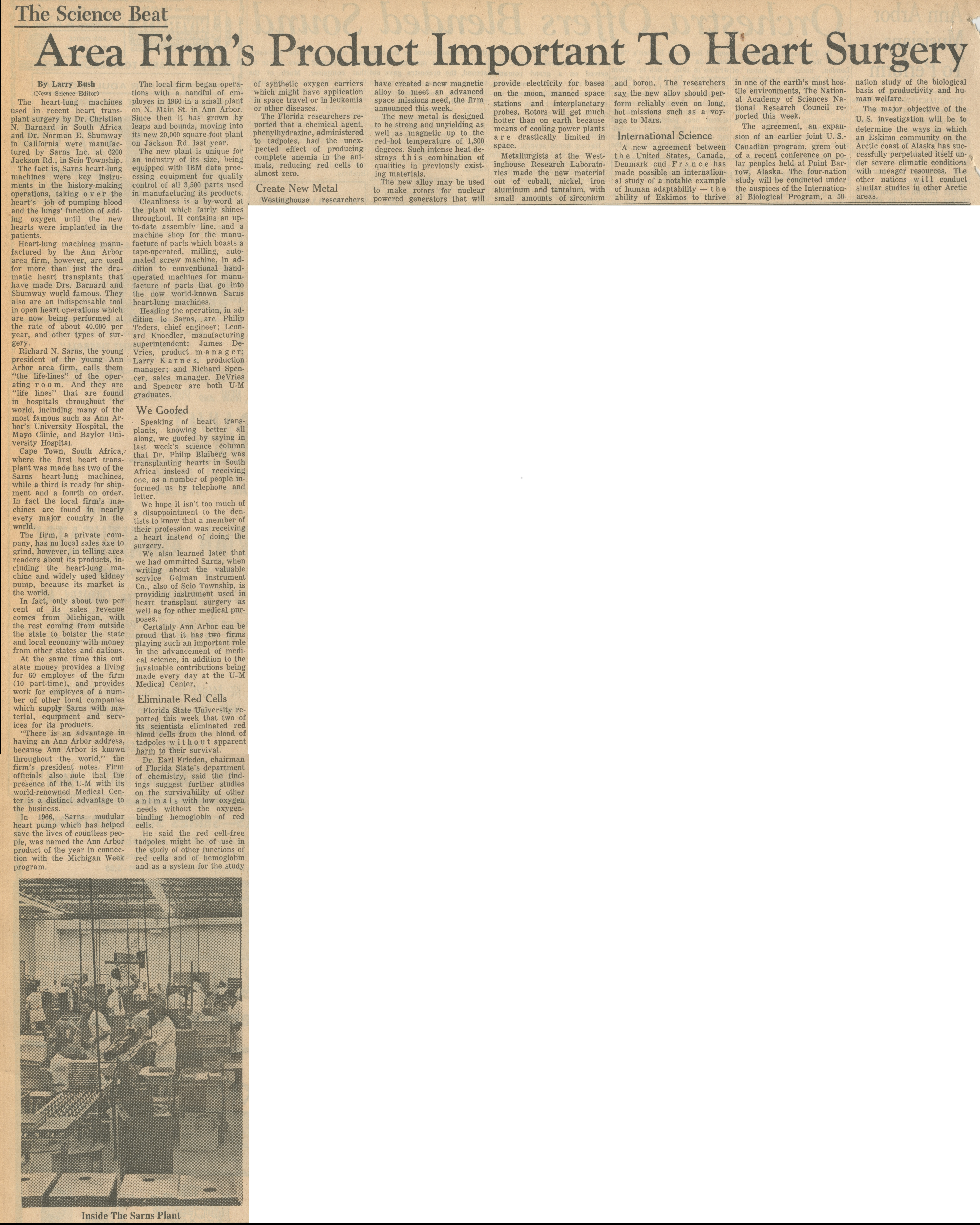 The fact is, Sarns heart-lung machines were key instruments in the history-making operations, taking over the heart’s job of pumping blood and the lungs’ function of adding oxygen until the new hearts were implanted in the patients.

Heart-lung machines manufactured by the Ann Arbor area firm, however, are used for more than just the dramatic heart transplants that have made Drs. Barnard and Shumway world famous. They also are an indispensable tool in open heart operations which are now being performed at the rate of about 40,000 per year, and other types of surgery.

Richard N. Sarns, the young president of the young Ann Arbor area firm, calls them “the life-lines” of the operating room. And they are “life lines” that are found in hospitals throughout the world, including many of the most famous such as Ann Arbor’s University Hospital, the Mayo Clinic, and Baylor University Hospital.

Cape Town, South Africa, where the first heart transplant was made has two of the Sarns heart-lung machines, while a third is ready for shipment and a fourth on order. In fact the local firm’s machines are found in nearly every major country in the world.

The firm, a private company, has no local sales axe to grind, however, in telling area readers about its products, including the heart-lung machine and widely used kidney pump, because its market is the world.

In fact, only about two percent of its sales revenue comes from Michigan, with the rest coming from outside the state to bolster the state and local economy with money from other states and nations.

At the same time this out-of-state money provides a living for 60 employees of the firm (10 part-time), and provides work for employees of a number of other local companies which supply Sarns with material, equipment and services for its products.

“There is an advantage in having an Ann Arbor address, because Ann Arbor is known throughout the world,” the firm’s president notes. Firm officials also note that the presence of the U-M with its world-renowned Medical Center is a distinct advantage to the business.

In 1966, Sarns modular heart pump which has helped save the lives of countless people, was named the Ann Arbor product of the year in connection with the Michigan Week program.

The local firm began operations with a handful of employes in 1960 in a small plant on N. Main St. in Ann Arbor. Since then it has grown by leaps and bounds, moving into its new 20,000 square-foot plant on Jackson Rd. last year.

The new plant is unique for an industry of its size, being equipped with IBM data processing equipment for quality control of all 3,500 parts used in manufacturing its products.

Cleanliness is a by-word at the plant which fairly shines throughout. It contains an up-to-date assembly line, and a machine shop for the manufacture of parts which boasts a tape-operated, milling, automated screw machine, in addition to conventional hand-operated machines for manufacture of parts that go into the now world-known Sarns heart-lung machines.

Speaking of heart transplants, knowing better all along, we goofed by saying in last week’s science column that Dr. Philip Blaiberg was transplanting hearts in South Africa instead of receiving one, as a number of people informed us by telephone and letter.

We hope it isn't too much of a disappointment to the dentists to know that a member of their profession was receiving a heart instead of doing the surgery.

We also learned later that we had ommitted Sarns, when writing about the valuable service Gelman Instrument Co., also of Scio Township, is providing instrument used in heart transplant surgery as well as for other medical purposes.

Certainly Ann Arbor can be proud that it has two firms playing such an important role in the advancement of medical science, in addition to the invaluable contributions being made every day at the U-M Medical Center.

Florida State University reported this week that two of its scientists eliminated red blood cells from the blood of tadpoles without apparent harm to their survival.

Dr. Earl Frieden, chairman of Florida State’s department of chemistry, said the findings suggest further studies on the survivability of other animals with low oxygen needs without the oxygen-binding hemoglobin of red cells.

He said the red cell-free tadpoles might be of use in the study of other functions of red cells and of hemoglobin and as a system for the study of synthetic oxygen carriers which might have application in space travel or in leukemia or other diseases.

The Florida researchers reported that a chemical agent, phenylhydrazine, administered to tadpoles, had the unexpected effect of producing complete anemia in the animals, reducing red cells to almost zero.

Westinghouse researchers have created a new magnetic alloy to meet an advanced space missions need, the firm announced this week.

The new metal is designed to be strong and unyielding as well as magnetic up to the red-hot temperature of 1,300 degrees. Such intense heat destroys this combination of qualities in previously existing materials.

The new alloy may be used to make rotors for nuclear powered generators that will provide electricity for bases on the moon, manned space stations and interplanetary probes. Rotors will get much hotter than on earth because means of cooling power plants are drastically limited in space.

Metallurgists at the Westinghouse Research Laboratories made the new material out of cobalt, nickel, iron aluminum and tantalum, with small amounts of zirconium and boron. The researchers say the new alloy should perform reliably even on long, hot missions such as a voyage to Mars.

A new agreement between the United States, Canada, Denmark and France has made possible an international study of a notable example of human adaptability — the ability of Eskimos to thrive in one of the earth’s most hostile environments, The National Academy of Sciences National Research Council reported this week.

The agreement, an expansion of an earlier joint U.S.-Canadian program, grew out of a recent conference on polar peoples held at Point Barrow, Alaska. The four-nation study will be conducted under the auspices of the International Biological Program, a 50-nation study of the biological basis of productivity and human welfare.

The major objective of the U. S. investigation will be to determine the ways in which an Eskimo community on the Arctic coast of Alaska has successfully perpetuated itself under severe climatic conditions with meager resources. The other nations will conduct similar studies in other Arctic areas.

Inside The Sarns Plant