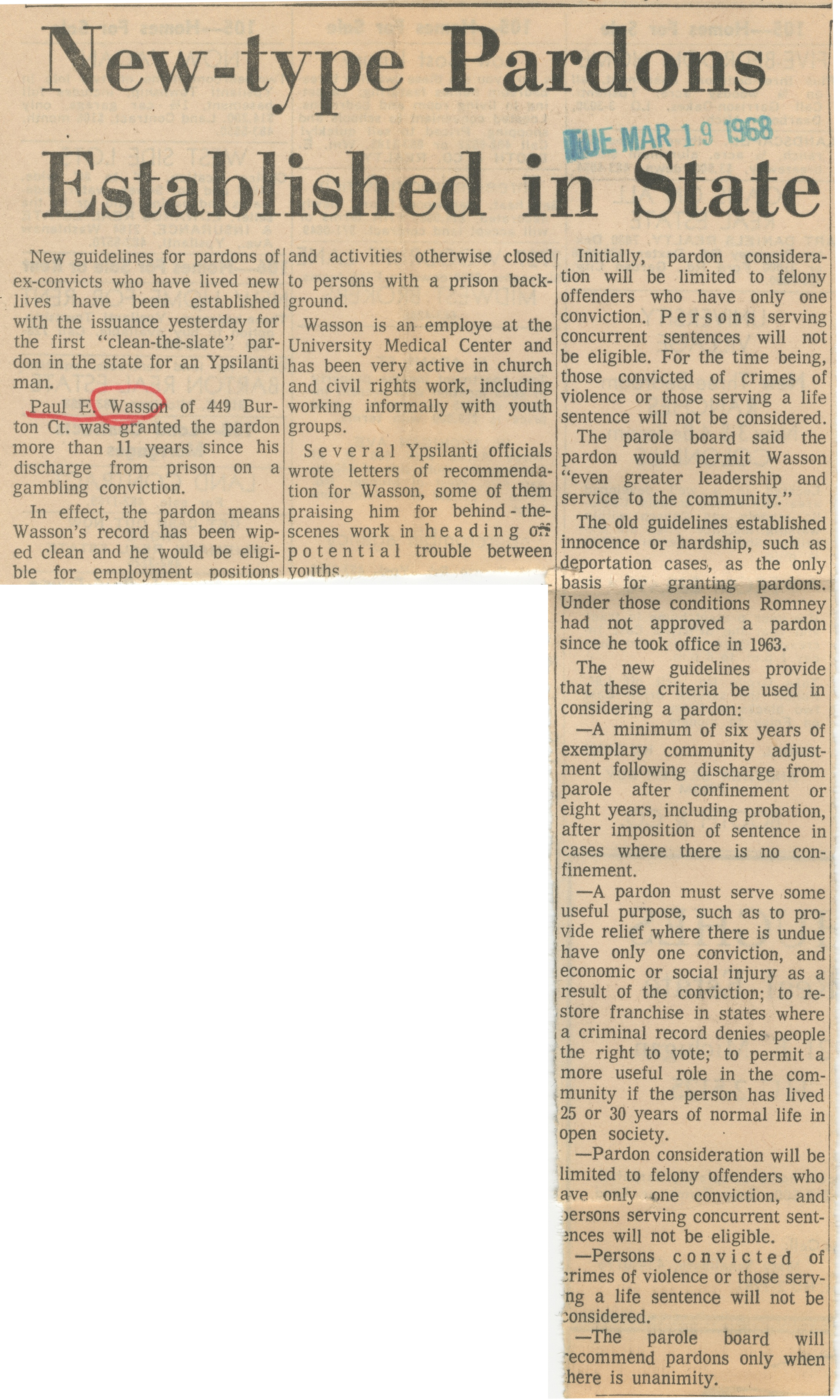 New guidelines for pardons of ex-convicts who have lived new lives have been established with the issuance yesterday for the first “clean-the-slate” pardon in the state for an Ypsiianti man.

Paul E. Wasson of 449 Burton Ct. was granted the pardon more than 11 years since his discharge from prison on a gambling conviction.

In effect, the pardon means Wasson’s record has been wiped clean and he would be eligible for employment positions

and activities otherwise closed to persons with a prison background.

Wasson is an employe at the University Medical Center and has been very active in church and civil rights work, including working informally with youth groups.

Several Ypsilanti officials wrote letters of recommendation for Wasson, some of them praising him for behind-the-scenes work in heading off potential trouble between youths.

Initially, pardon consideration will be limited to felony offenders who have only one conviction. Persons serving concurrent sentences will not be eligible. For the time being, those convicted of crimes of violence or those serving a life sentence will not be considered.

The parole board said the pardon would permit Wasson “even greater leadership and service to the community.’’

The old guidelines established innocence or hardship, such as deportation cases, as the only basis for granting pardons. Under those conditions Romney had not approved a pardon since he took office in 1963.

The new guidelines provide that these criteria be used in considering a pardon:

—A minimum of six years of exemplary community adjustment following discharge from parole after confinement or eight years, including probation, after imposition of sentence in cases where there is no confinement.

—A pardon must serve some useful purpose, such as to provide relief where there is undue have only one conviction, and economic or social injury as a result of the conviction; to restore franchise in states where a criminal record denies people the right to vote; to permit a more useful role in the community if the person has lived 25 or 30 years of normal life in open society.

—Pardon consideration will be limited to felony offenders who have only one conviction, and persons serving concurrent sentences will not be eligible.

—Persons convicted of crimes of violence or those serving a life sentence will not be considered.

—The parole board will recommend pardons only when there is unanimity.