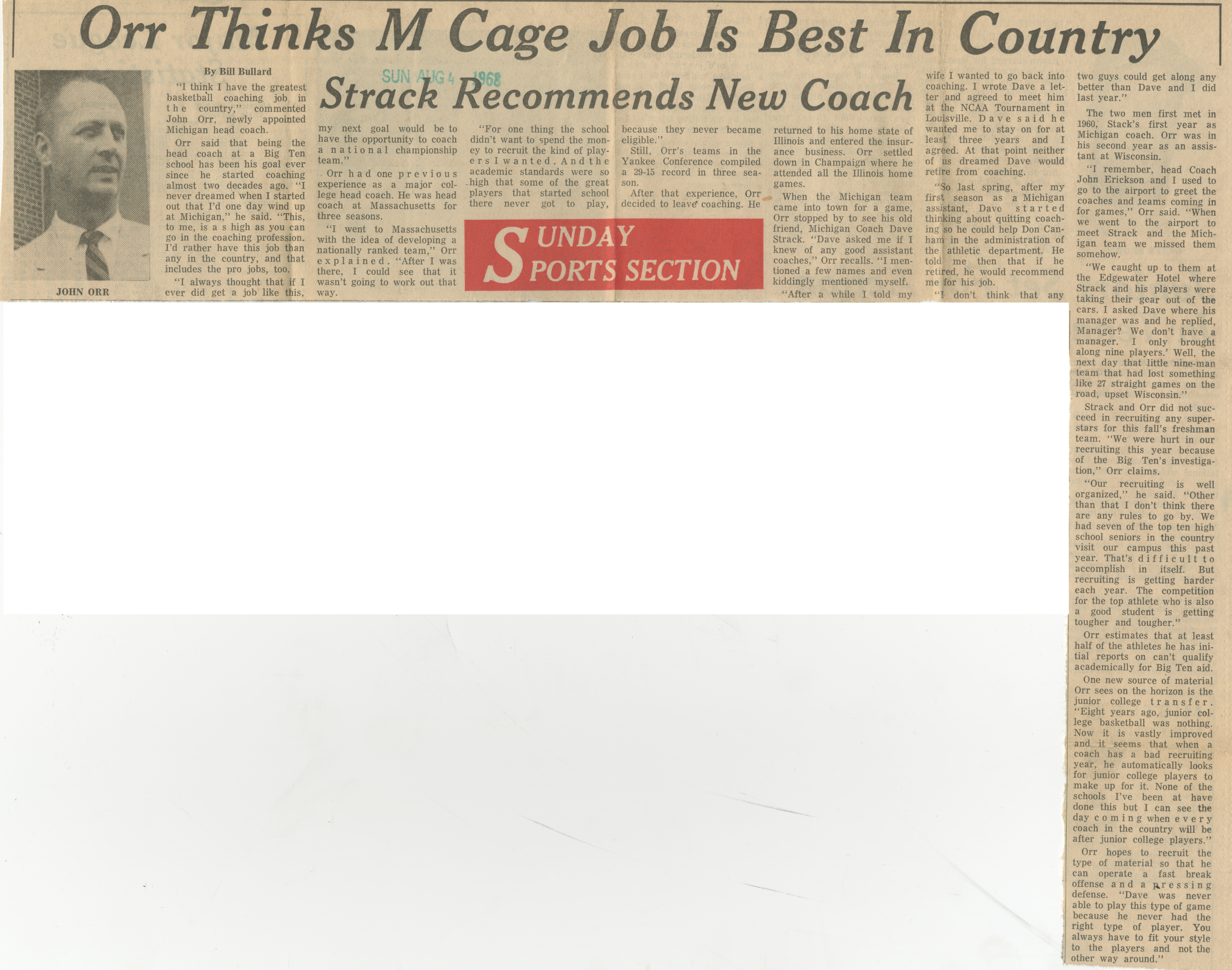 ﻿Orr Thinks M Cage Job Is Best In Country<br><br>By Bill Bullard<br><br>“I think I have the greatest basketball coaching job in the country,” commented John Orr, newly appointed Michigan head coach.<br><br>Orr said that being the head coach at a Big Ten school has been his goal ever since he started coaching almost two decades ago. “I never dreamed when I started out that I’d one day wind up at Michigan,” he said. “This, to me, is a s high as you can go in the coaching profession. I’d rather have this job than any in the country, and that includes the pro jobs, too.<br><br>“I always thought that if I ever did get a job like this.<br><br>Strack Recommends New Coach<br><br>my next goal would be to have the opportunity to coach a national championship team.”<br><br>Orr had one previous experience as a major college head coach. He was head coach at Massachusetts for three seasons.<br><br>“I went to Massachusetts with the idea of developing a nationally ranked team,” Orr explained. “After I was there, I could see that it wasn’t going to work out that way.<br><br>“For one thing the school didn’t want to spend the money to recruit the kind of play-ers I wanted. Andthe academic standards were so .high that some of the great players that started school there never got to play,<br><br>because they never became eligible.”<br><br>Still, Orr’s teams in the Yankee Conference compiled a 29-15 record in three season.<br><br>After that experience, Orr decided to leave" coaching. He<br><br>5 UNDAY<br><br>PORTS SECTION<br><br>returned to his home state of Illinois and entered the insurance business. Orr settled down in Champaign where he attended all the Illinois home games.<br><br>When the Michigan team came into town for a game, Orr stopped by to see his old friend, Michigan Coach Dave Strack. “Dave asked me if I knew of any good assistant coaches,” Orr recalls. “I mentioned a few names and even kiddingly mentioned myself.<br><br>“After a while I told my<br><br>wife I wanted to go back into coaching. I wrote Dave a letter and agreed to meet him at the NCAA Tournament in Louisville. Dave said he wanted me to stay on for at least three years and I agreed. At that point neither of us dreamed Dave would retire from coaching.<br><br>“So last spring, after my first season as a Michigan assistant, Dave started thinking about quitting coaching so he could help Don Can-hani in the administration of the athletic department. He told me then that if he retired, he would recommend me for his job.<br><br>“I don’t think that any<br><br>two guys could get along any better than Dave and I did last year.”<br><br>The two men first met in 1960, Stack’s first year as Michigan coach. Orr was in his second year as an assistant at Wisconsin.<br><br>“I remember, head Coach John Erickson and I used to go to the airport to greet the coaches and teams coming in for games,” Orr said. “When we went to the airport to meet Strack and the Michigan team we missed them somehow.<br><br>“We caught up to them at the Edgewater Hotel where Strack and his players were taking their gear out of the cars. I asked Dave where his manager was and he replied, Manager? We don’t have a manager. I only brought along nine players.’ Well, the next day that little nine-man team that had lost something like 27 straight games on the road, upset Wisconsin.”<br><br><br><br>Strack and Orr did not succeed in recruiting any super-stars for this fall’s freshman team. “We were hurt in our recruiting this year because of the Big Ten’s investigation,” Orr claims.<br><br>“Our recruiting is well organized,” he said. “Other than that I don’t think there are any rules to go by. We had seven of the top ten high school seniors in the country visit our campus this past year. That’s difficult to accomplish in itself. But recruiting is getting harder each year. The competition for the top athlete who is also a good student is getting tougher and tougher.”<br><br>Orr estimates that at least half of the athletes he has initial reports on can’t qualify academically for Big Ten aid.<br><br>One new source of material Orr sees on the horizon is the junior college transfer. “Eight years ago, junior college basketball was nothing. Now it is vastly improved and it seems that when a coach has a bad recruiting year, he automatically looks for junior college players to make up for it. None of the schools I’ve been at have done this but I can see the day coming when every coach in the country will be after junior college players.” Orr hopes to recruit the type of material so that he can operate a fast break offense and a pressing defense. “Dave was never able to play this type of game because he never had the right type of player. You always have to fit your style to the players and not the other way around.”