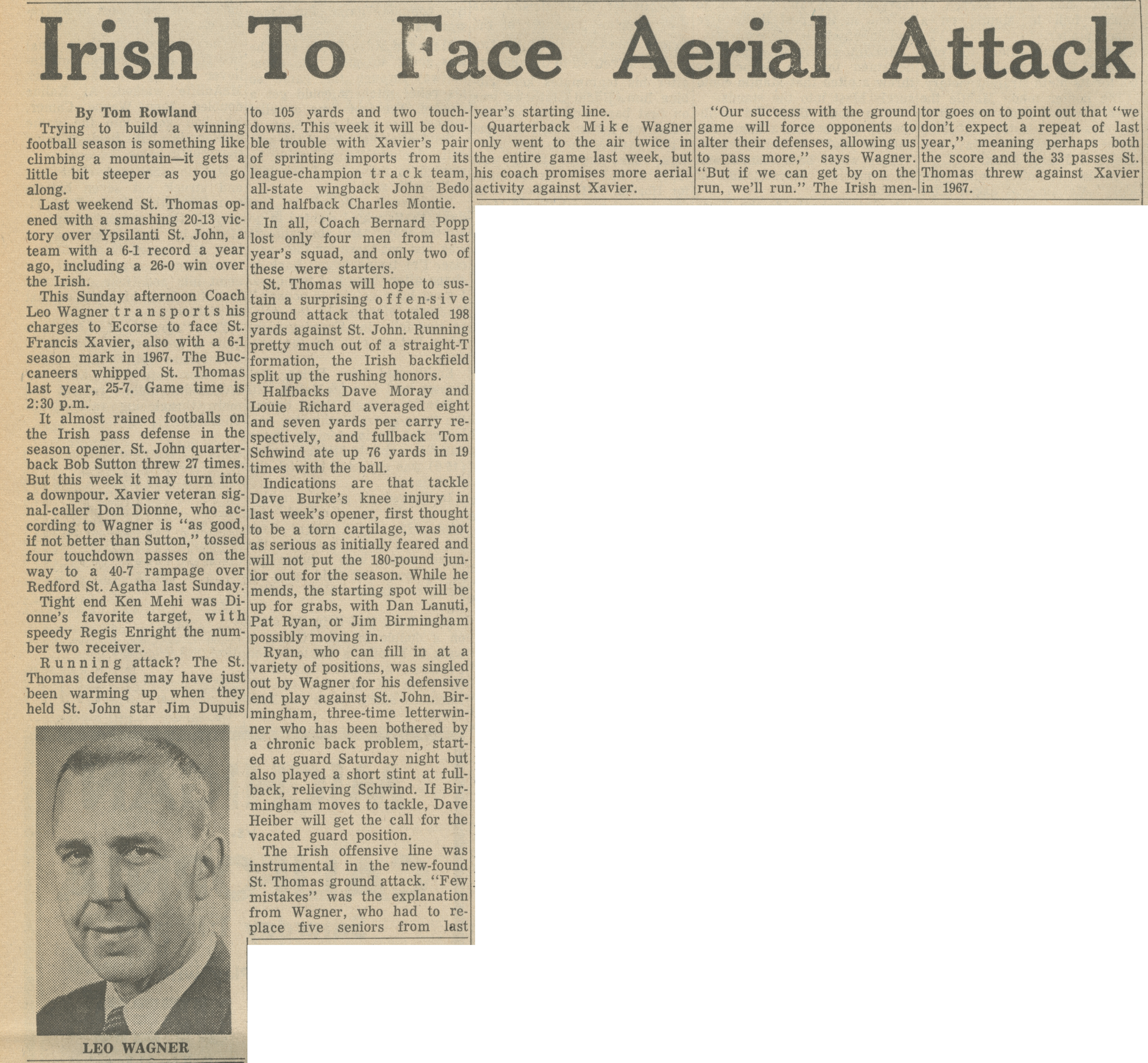 Trying to build a winning football season is something like climbing a mountain—it gets a little bit steeper as you go along.

Last weekend St. Thomas opened with a smashing 20-13 victory over Ypsilanti St. John, a team with a 6-1 record a year ago, including a 26-0 win over the Irish.

It almost rained footballs on the Irish pass defense in the season opener. St. John quarterback Bob Sutton threw 27 times. But this week it may turn into a downpour. Xavier veteran signal-caller Don Dionne, who according to Wagner is “as good, if not better than Sutton,” tossed four touchdown passes on the way to a 40-7 rampage over Redford St. Agatha last Sunday.

Running attack? The St. Thomas defense may have just been warming up when they held St. John star Jim Dupuis to 105 yards and two touchdowns. This week it will be double trouble with Xavier’s pair of sprinting imports from its league-champion track team, all-state wingback John Bedo and halfback Charles Montie.

In all, Coach Bernard Popp lost only four men from last year’s squad, and only two of these were starters.

St. Thomas will hope to sustain a surprising offensive ground attack that totaled 198 yards against St. John. Running pretty much out of a straight-T formation, the Irish backfield split up the rushing honors.

Halfbacks Dave Moray and Louie Richard averaged eight and seven yards per carry respectively, and fullback Tom Schwind ate up 76 yards in 19 times with the ball.

Indications are that tackle Dave Burke’s knee injury in last week’s opener, first thought to be a torn cartilage, was not as serious as initially feared and will not put the 180-pound junior out for the season. While he mends, the starting spot will be up for grabs, with Dan Lanuti, Pat Ryan, or Jim Birmingham possibly moving in.

Ryan, who can fill in at a variety of positions, was singled out by Wagner for his defensive end play against St. John. Birmingham, three-time letterwinner who has been bothered by a chronic back problem, started at guard Saturday night but also played a short stint at fullback, relieving Schwind. If Birmingham moves to tackle, Dave Heiber will get the call for the vacated guard position.

The Irish offensive line was instrumental in the new-found St. Thomas ground attack. “Few mistakes” was the explanation from Wagner, who had to replace five seniors from last year’s starting line.

Quarterback Mike Wagner only went to the air twice in the entire game last week, but his coach promises more aerial activity against Xavier.

“Our success with the ground game will force opponents to alter their defenses, allowing us to pass more,” says Wagner. “But if we can get by on the run, we’ll run.” The Irish mentor goes on to point out that “we don’t expect a repeat of last year,” meaning perhaps both the score and the 33 passes St. Thomas threw against Xavier in 1967.