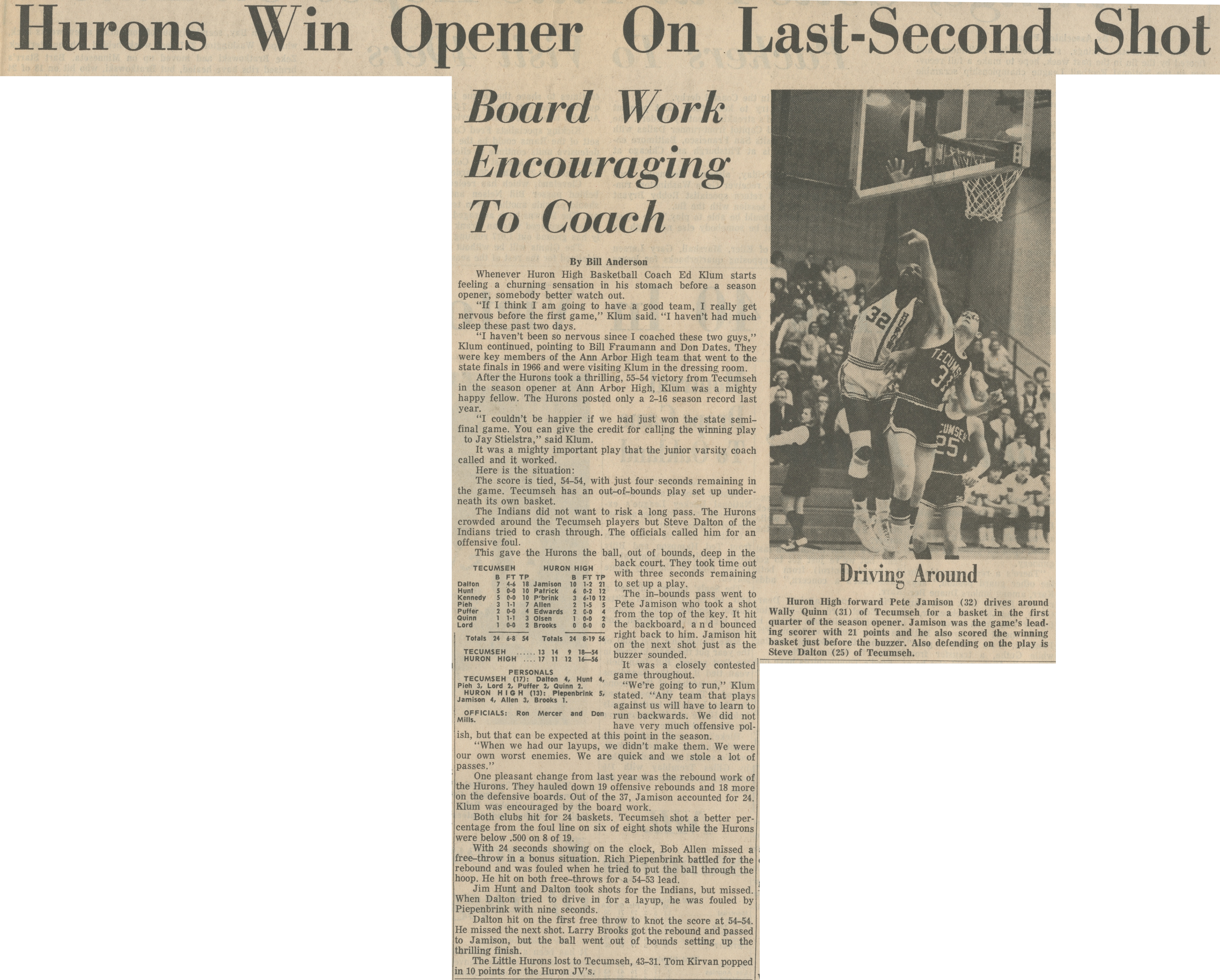 Board Work Encouraging To Coach

Whenever Huron High Basketball Coach Ed Klum starts feeling a churning sensation in his stomach before a season opener, somebody better watch out.

“If I think I am going to have a good team, I really get nervous before the first game,” Klum said. “I haven’t had much sleep these past two days.

“I haven’t been so nervous since I coached these two guys,” Klum continued, pointing to Bill Fraumann and Don Dates. They were key members of the Ann Arbor High team that went to the state finals in 1966 and were visiting Klum in the dressing room.

After the Hurons took a thrilling, 55-54 victory from Tecumseh in the season opener at Ann Arbor High, Klum was a mighty happy fellow. The Hurons posted only a 2-16 season record last year.

“I couldn’t be happier if we had just won the state semifinal game. You can give the credit for calling the winning play to Jay Stielstra,” said Klum.

It was a mighty important play that the junior varsity coach called and it worked.

Here is the situation:

The score is tied, 54-54, with just four seconds remaining in the game. Tecumseh has an out-of-bounds play set up underneath its own basket.

The Indians did not want to risk a long pass. The Hurons crowded around the Tecumseh players but Steve Dalton of the Indians tried to crash through. The officials called him for an offensive foul.

This gave the Hurons the ball, out of bounds, deep in the back court. They took time out with three seconds remaining to set up a play.

The in-bounds pass went to Pete Jamison who took a shot from the top of the key. It hit the backboard, and bounced right back to him. Jamison hit on the next shot just as the buzzer sounded.

It was a closely-contested game throughout.

"We're going to run," Klum stated. "Any team that plays against us will have to learn to run backwards. We did not have very much offensive polish, but that can be expected at this point in the season.

“When we had our layups, we didn’t make them. We were own worst enemies. We are quick and we stole a lot of passes."

One pleasant change from last year was the rebound work of the Hurons. They hauled down 19 offensive rebounds and 18 more on the defensive boards. Out of the 37, Jamison accounted for 24. Klum was encouraged by the board work.

Both clubs hit for 24 baskets. Tecumseh shot a better percentage from the foul line on six of eight shots while the Hurons were below .500 on 8 of 19.

With 24 seconds showing on the clock, Bob Allen missed a free-throw in a bonus situation. Rich Piepenbrink battled for the i rebound and was fouled when he tried to put the ball through the hoop. He hit on both free-throws for a 54-53 lead.

Jim Hunt and Dalton took shots for the Indians, but missed. Dalton tried to drive in for a layup, he was fouled by Piepenbrink with nine seconds.

Dalton hit on the first free throw to knot the score at 54-54. missed the next shot. Larry Brooks got the rebound and passed to Jamison, but the ball went out of bounds setting up the ‘thrilling finish.

Huron High forward Pete Jamison (32) drives around Wally Quinn (31) of Tecumseh for a basket in the first quarter of the season opener. Jamison was the game’s leading scorer with 21 points and he also scored the winning basket just before the buzzer. Also defending on the play is Steve Dalton (25) of Tecumseh.