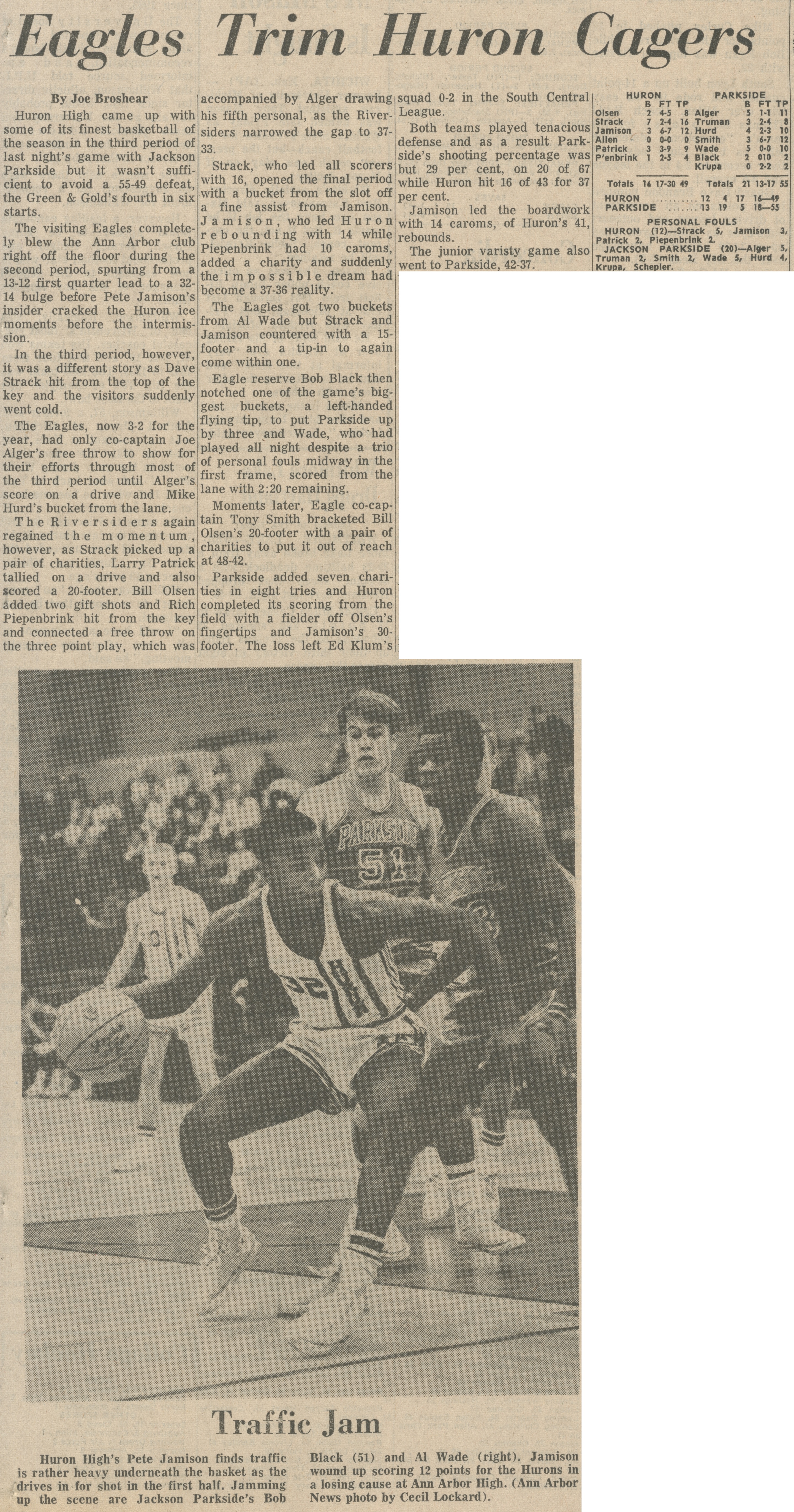 Huron High came up with some of its finest basketball of the season in the third period of last night’s game with Jackson Parkside but it wasn’t sufficient to avoid a 55-49 defeat, the Green & Gold’s fourth in six starts.

The visiting Eagles completely blew the Ann Arbor club right off the floor during the second period, spurting from a 13-12 first quarter lead to a 32-14 bulge before Pete Jamison’s insider cracked the Huron ice moments before the intermission.

In the third period, however, it was a different story as Dave Strack hit from the top of the key and the visitors suddenly went cold.

The Eagles, now 3-2 for the year, had only co-captain Joe Alger’s free throw to show for their efforts through most of the third period until Alger's score on a drive and Mike Hurd’s bucket from the lane.

The Riversiders again regained the momentum, however, as Strack picked up a pair of charities, Larry Patrick tallied on a drive and also scored a 20-footer. Bill Olsen added two gift shots and Rich Piepenbrink hit from the key and connected a free throw on the three point play, which was accompanied by Alger drawing his fifth personal, as the Riversiders narrowed the gap to 37-33.

Strack, who led all scorers with 16, opened the final period with a bucket from the slot off a fine assist from Jamison. Jamison, who led Huron rebounding with 14 while Piepenbrink had 10 caroms, added a charity and suddenly the impossible dream had become a 37-36 reality.

The Eagles got two buckets from A1 Wade but Strack and Jamison countered with a 15-footer and a tip-in to again come within one.

Eagle reserve Bob Black then notched one of the game’s biggest buckets, a left-handed flying tip, to put Parkside up by three and Wade, who had played all night despite a trio of personal fouls midway in the first frame, scored from the lane with 2:20 remaining.

Moments later, Eagle co-captain Tony Smith bracketed Bill Olsen’s 20-footer with a pair of charities to put it out of reach at 48-42.

Parkside added seven charities in eight tries and Huron completed its scoring from the field with a fielder off Olsen’s fingertips and Jamison's 30-footer. The loss left Ed Klum's squad 0-2 in the South Central League.

Both teams played tenacious defense and as a result Park-side’s shooting percentage was but 29 per cent, on 20 of 67 while Huron hit 16 of 43 for 37 per cent.

Jamison led the boardwork with 14 caroms, of Huron’s 41, rebounds.

Huron's High Pete Jamison finds traffic is rather heavy underneath the basket as the drives in for shot in the first half. Jamming up the scene are Jackson Parkside's Bob
Black (51) and A1 Wade (right). Jamison wound up scoring 12 points for the Hurons in a losing cause at Ann Arbor High. (Ann Arbor News photo by Cecil Lockard).