18-Year Project Worth The Wait 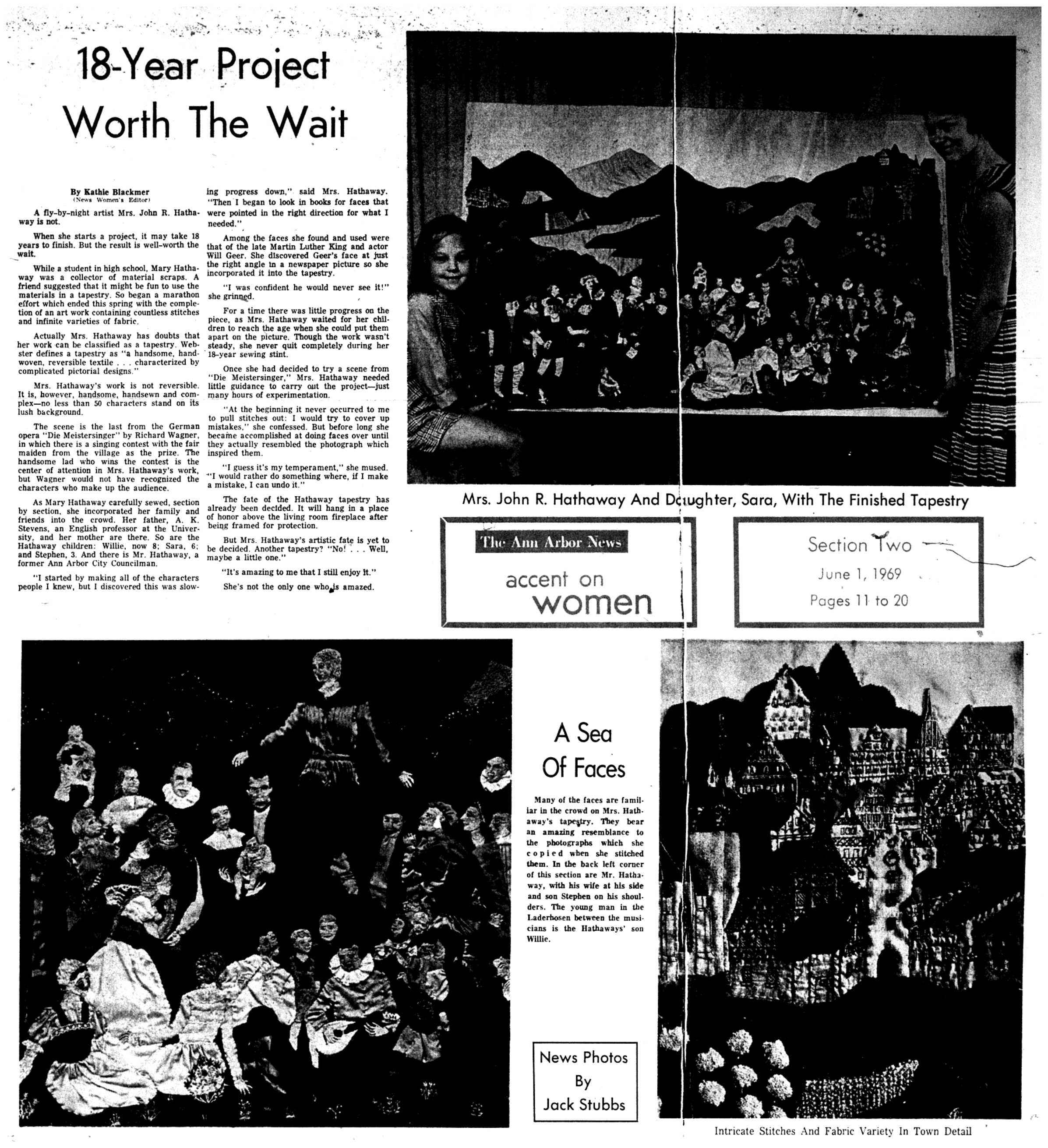 By Kathie Blackmer
A fly-by-night artist Mrs. John R. Hathaway is bet.
When she starts a project, it may take 18 years to finish. But the result is well-worth the wait.
While a student in high school, Mary HathaWAY was collector of material scraps A friend suggested that it might be fun to use the materials in a tapestry. So began a marathon effort which ended this spring with the couple tion of an art work containing countless stitches aod infinite varieties of fabric.
Actually Mrs. Hathaway has doubts that her work can be classified as a tapestry. Web. ster defines a tapestry as a handsome, hand woven, reversible textile... characterized by complicated pictorial designs
Mrs. Hathaway's work is not reversible. It is, however, handsome, hand sewn and complex-no less than 50 characters stand on its lush background
The scene is the last from the German opera "Die Meistersinger" by Richard Wagner in which there is a singing contest with the fair maiden from the village as the prize. The handsome lad who wins the contest is the center of attention in Mrs. Hathaway's work, but Wagner would not have recognized the characters who make up the audience
As Mary Hathaway carefully sewed, section by section, she incorporated her family and friends into the crowd. Her father. A K Stevens, as english professor at the Univer. sity, and her mother are there. So are the Hathaway children wille TOY S ara 6 and Stephen, 3. And there is Mr. Hathaway, a former Ann Arbor City Councilman.
I started by making all of the characters people I knew, but I discovered this was slowing progress down," said Mrs. Hathaway
Then I began to look in books for faces that were pointed in the right direction for what I needed."
Among the faces she found and used were that of the late Martin Luther King and actor Will Geer. She discovered Geer's face at Just the right angle in a newspaper picture so she incorporated it into the tapestry.
"I was confident he would never see it! she printed
For a time there was ne progress on the piece, as Mr. Hathaway waited for her chill dren to reach the age when she could put them apart on the picture. Though the work wasn't steady, she never quit completely during her 15-year sewing stint.
Once she had decided to try a scene from "Die Meistersinger Mrs. Hathaway Beeded
little guidance to carry out the project-just many hours of experimentation
At the beginning it never gecurred to me to pull stitches out: I would try to cover up mistakes, she confessed. But before long she became accomplished at doing faces over until they actually resembled the photograph which inspired them
I guess it's my temperament, she mused "I would rather do something where, if I make a mistake. I can undo it.
The fate of the Hathaway tapestry has already been decided. It will hang in a place of honer above the living room fireplace after being framed for protection
But Mrs. Hathaway's artistic fate is yet to be decided. Another tapestry? No!... Well, maybe a little one."
"It's amazing to me that I still enjoy it." She's not the only one who s amazed.

A Sea Of Faces
Many of the faces are familiar la the crowd on Mrs. Hathaway's tapestry. They bear an amazing resemblance to the photographs which she copied when she stitched them. In the back left corner of this section are Mr. Hathaway, with his wife at his side and son Stephen on his shoulders. The young man in the Laderhosen between the musicians is the Hathaways son Willie