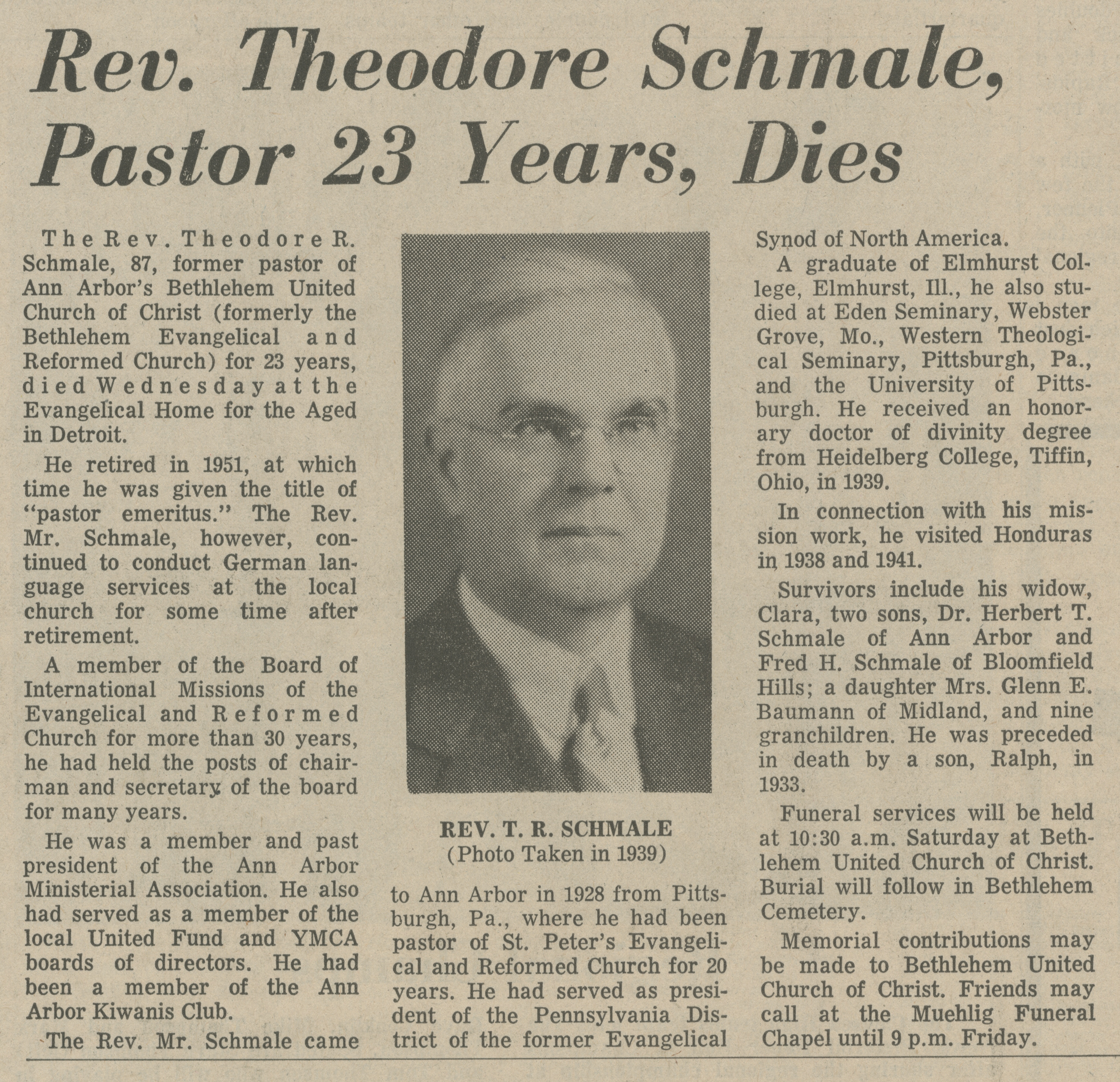 The Rev. Theodore R. Schmale, 87, former pastor of Ann Arbor's Bethlehem United Church of Christ (formerly the Bethlehem Evangelical and Reformed Church) for 23 years, died Wednesday at the Evangelical Home for the Aged in Detroit.
He retired in 1951, at which time he was given the title of "pastor emeritus." The Rev. Mr. Schmale, however, continued to conduct German language services at the local church for some time after retirement.
A member of the Board of International Missions of the Evangelical and Reformed Church for more than 30 years, he had held the posts of chairman and secretary of the board for many years.
He was a member and past president of the Ann Arbor Ministerial Association. He also had served as a member of the local United Fund and YMCA boards of directors. He had been a member of the Ann Arbor Kiwanis Club.
The Rev. Mr. Schmale came to Ann Arbor in 1928 from Pittsburgh, Pa., where he had been pastor of St. Peter's Evangelical and Reformed Church for 20 years. He had served as president of the Pennsylvania District of the former Evangelical Synod of North America.
A graduate of Elmhurst College, Elmhurst, Ill., he also studied at Eden Seminary, Webster Grove, Mo., Western Theological Seminary, Pittsburgh, Pa., and the University of Pittsburgh. He received an honorary doctor of divinity degree from Heidelberg College, Tiffin, Ohio, in 1939.
In connection with his mission work, he visited Honduras in 1938 and 1941.
Survivors include his widow, Clara, two sons, Dr. Herbert T. Schmale of Ann Arbor and Fred H. Schmale of Bloomfield Hills; a daughter Mrs. Glenn E. Baumann of Midland, and nine grandchildren. He was preceded in death by a son, Ralph, in 1933.
Funeral services will be held at 10:30 a.m. Saturday at Bethlehem United Church of Christ. Burial will follow in Bethlehem Cemetery.
Memorial contributions may be made to Bethlehem United Church of Christ. Friends may call at the Muehlig Funeral Chapel until 9 p.m. Friday.