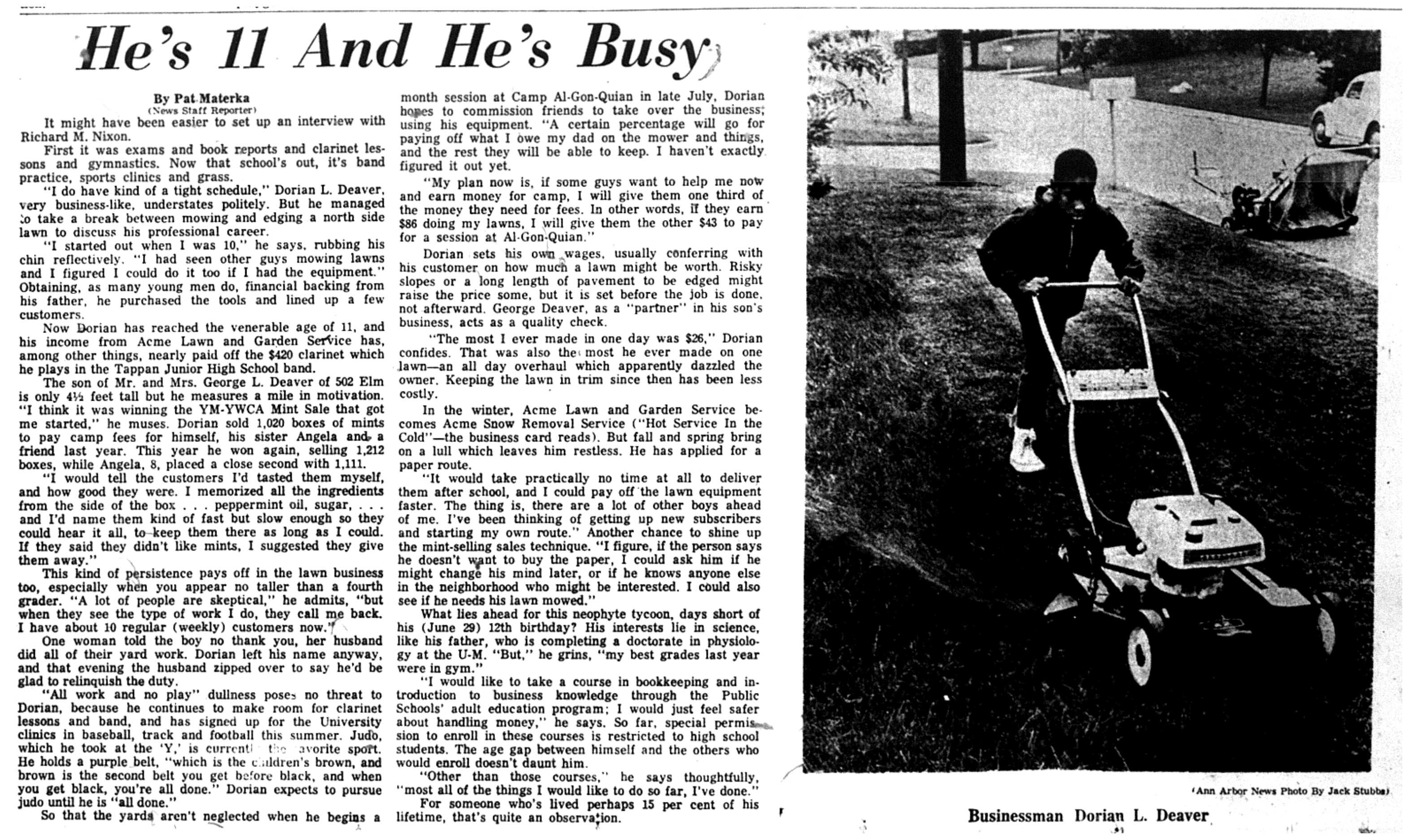 By Pat Materka
News Staff Report It might have been easier to set up an interview with Richard M. Nixon.
First it was exams and book reports and clarinet les sons and gymnastics. Now that school's out, it's band practice, sports clinics and grass
"I do have kind of a tight schedule. Dorian L Deaver very business-like understates politely. But he managed
o take a break between mowing and edging a north side lawn to discuss his professional career
"I started out when I was 10," he says, rubbing his chin reflectively. "I had seen other guys mowing laws and I figured I could do it too if I had the equipment." Obtaining, as many young men de, financial backing from his father, he purchased the tools and lined up a few customers
Now Dorian has reached the venerable age of 11 and his income from Acme Lawn and Garden Service has among other things, nearly paid off the $420 clarinet which he plays in the Tappan Junior High School band
The son of Mr. and Mrs. George L Deaver of 502 Elm is only 16 feet tall but he measures mile in motivation "I think it was winning the YM-YWCA Mint Sale that got me started," he muses. Dorian sold 1,020 boxes of mints to pay camp fees for himsell his sister Angela and friend last year. This year he won again, selling 1,212 boxes, while Angela, 8, placed a close second with 1,111,
"I would tell the customers I'd tasted them mysell and how good they were. I memorized all the ingredients from the side of the box...peppermint oil, sugar, ... and I'd name them kind of fast but slow enough so they could hear it all, to keep them there as long as I could If they said they didn't like mints, I suggested they give them away."
This kind of persistence pays off in the lawn business too, especially when you appear no taller than a fourth grader. "A lot of people are skeptical," he admits, but when they see the type of work i do, they call me back. I have about 10 regular (weekly) customers now.
One woman told the boy to thank you, her husband did all of their yard work. Dorian left his name anyway. and that evening the husband zipped over to say he'd be glad to relinquish the duty
All work and to play dullness poses be threat to Dorian, because he continues to make room for clarinet lessons and band, and has signed up for the University clinics in baseball track and football this summer. Judo which he took at the "Y" is current svorite sport He holds a purple belt, "which is the caldren's brown, and browa is the second belt you get before black and when you get black, you're all done." Dorian expects to pursue Judo until he is all done."
So that the yards aren't neglected when he begins a month session at Camp Al-Gon-Quian in late July, Dorian hopes to commission friends to take over the business using his equipment. "A certain percentage will go for paying off what I owe my dad on the mower and things and the rest they will be able to keep. I haven't exactly figured it out yet.
"My plan now is, if some guys want to help me now and earn money for camp. I will give them one third of the money they need for fees. In other words, they can $85 doing my lawns, I will give them the other so to pay for a session at Al Gon-Quian."
Dorian sets his owe wages usually conferring with his customer on how much a lawn might be worth Risky slopes or long length of pavement to be edged might Taise the price some, but it is set before the job is done not afterward. George Deaver, as a partner in his son's business, acts as a quality check
The most I ever made in one day was $26" Dorian confides. That was also the most he ever made on one lawn-an all day overhaul which apparently dazzled the owner. Keeping the lawn in trim since then has been less costly.
In the winter. Acme Lawn and Garden Service becomes Acme Snow Removal Service ("Hot Service in the Cold-the business card reads), But fall and spring bring on a lull which leaves him restless. He has applied for a paper route
It would take practically no time at all to deliver them after school, and I could pay off the lawn equipment faster. The thing is, there are a lot of other boys ahead of me. I've been thinking of getting up new subscribers and starting my own route. Another chance to shine up the mint-selling sales technique. "I figure, if the person says he doesn't want to buy the paper, I could ask him if he might change his mind later, or if he knows anyone else in the neighborhood who might be interested. I could also see if he needs his lawn mowed."
What lies ahead for this neophyte tycoon days short of his (June 29) 12th birthday? His interests lie in science, like his father, who is completing a doctorate in physiolo By at the U-M. But," he grins, my best grades last year were in gym.
"I would like to take a course in bookkeeping and introduction to business knowledge through the Public Schools adult education program: I would just feel safer about handling money," he says. So far. special permission to enroll in these courses is restricted to high school students. The age gap between himself and the others who would enroll doesn't daust him.
Other than those courses," he says thoughtfully. "most all of the things I would like to do so far, I've done."
For someone who's lived perhaps 15 percent of his lifetime, that's quite an observation.