Identification Of Suspect Is Claimed For Hurkos 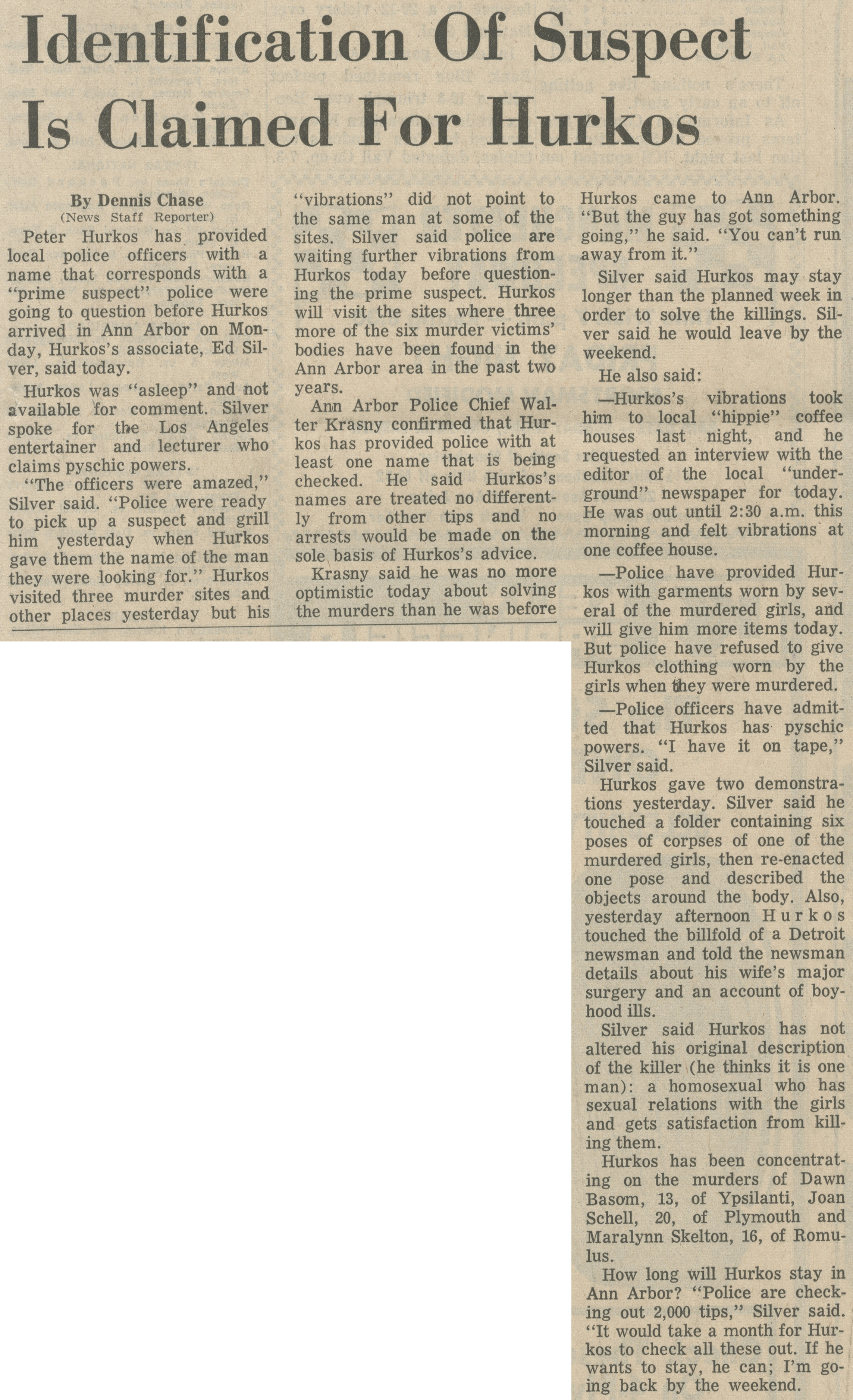 ﻿Identification Of Suspect Is Claimed For Hurkos

Peter Hurkos has provided local police officers with a name that corresponds with a “prime suspect” police were going to question before Hurkos arrived in Ann Arbor on Monday, Hurkos’s associate, Ed Silver, said today.

Hurkos was “asleep” and not available for comment. Silver spoke for the Los Angeles entertainer and lecturer who claims pyschic powers.

“The officers were amazed,” Silver said. “Police were ready to pick up a suspect and grill him yesterday when Hurkos gave them the name of the man they were looking for.” Hurkos visited three murder sites and other places yesterday but his

“vibrations” did not point to the same man at some of the sites. Silver said police are waiting further vibrations from Hurkos today before questioning the prime suspect. Hurkos will visit the sites where three more of the six murder victims’ bodies have been found in the Ann Arbor area in the past two years.

Ann Arbor Police Chief Walter Krasny confirmed that Hurkos has provided police with at least one name that is being checked. He said Hurkos’s names are treated no differently from other tips and no arrests would be made on the sole basis of Hurkos’s advice.

Hurkos came to Ann Arbor. “But the guy has got something going,” he said. “You can’t run away from it.”

Silver said Hurkos may stay longer than the planned week in order to solve the killings. Silver said he would leave by the weekend.

—Hurkos’s vibrations took him to local “hippie” coffee houses last night, and he requested an interview with the editor of the local “underground” newspaper for today. He was out until 2:30 a.m. this morning and felt vibrations at one coffee house.

—Police have provided Hurkos with garments worn by several of the murdered girls, and will give him more items today. But police have refused to give Hurkos clothing worn by the girls when they were murdered.

—Police officers have admitted that Hurkos has pyschic powers. “I have it on tape,” Silver said.

Hurkos gave two demonstrations yesterday. Silver said he touched a folder containing six poses of corpses of one of the murdered girls, then re-enacted one pose and described the objects around the body. Also, yesterday afternoon Hurkos touched the billfold of a Detroit newsman and told the newsman details about his wife’s major surgery and an account of boyhood ills.

Silver said Hurkos has not altered his original description of the killer (he thinks it is one man): a homosexual who has sexual relations with the girls and gets satisfaction from killing them.

Hurkos has been concentrating on the murders of Dawn Basom, 13, of Ypsilanti, Joan Schell, 20, of Plymouth and Maralynn Skelton, 16, of Romulus.

How long will Hurkos stay in Ann Arbor? “Police are checking out 2,000 tips,” Silver said. “It would take a month for Hurkos to check all these out. If he wants to stay, he can; I’m going back by the weekend.