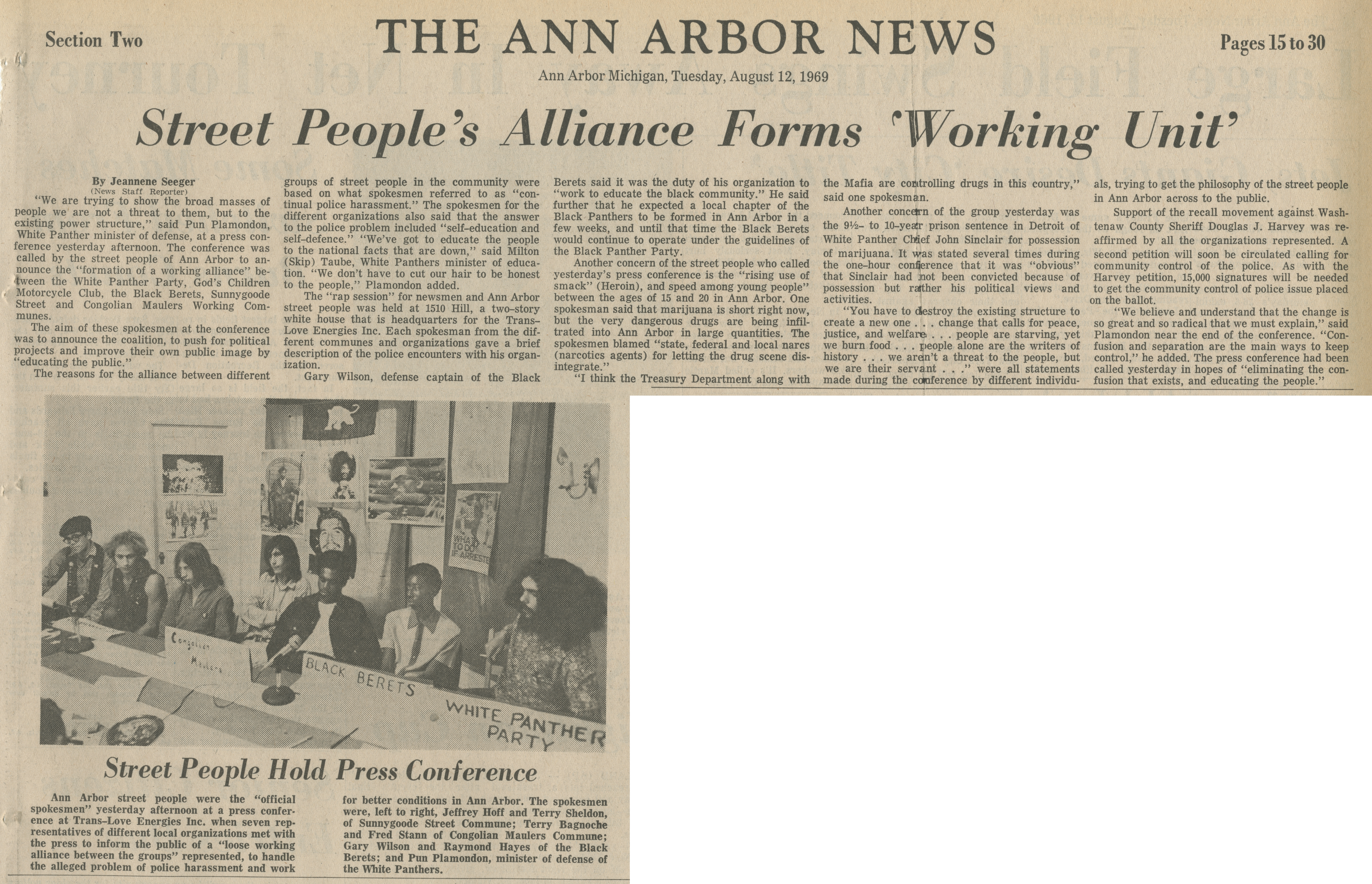 "We are trying to show the broad masses of
people we are not a threat to them, but to the
existing power structure," said Pun Plamondon,
White Panther minister of defense, at a press con-
ference yesterday afternoon. The conference was
called by the street people of Ann Arbor to an-
nounce the "formation of a working alliance" be-
tween the White Panther Party, God's Children
Motorcycle Club, the Black Berets, Sunnygoode
Street and Congolian Maulers Working Com-
munes.

The aim of these spokesmen at ^hr ""inference
was to announce the coalition, to p 'olitical
projects and improve their own public image by
"educating the public."

The reasons for the alliance between different

groups of street people in the community were
based on what spokesmen referred to as "con-
tinual police harassment." The spokesmen for the
different organizations also said that the answer
to the police problem included "self-education and
self-defence." "We've got to educate the people
to the national facts that are down," said Milton
(Skip) Taube, White Panthers minister of educa-
tion. "We don't have to cut our hair to be honest
to the people," Plamondon added.

The "rap session" for newsmen and Ann Arbor
street people was held at 1510 Hill, a two-story
white house that is headquarters for the Trans-
Love Energies Inc. Each spokesman from the dif-
ferent communes and organizations gave a brief
(' 'ion of the police encounters with his organ-

Berets said it was the duty of his organization to
"work to educate the black community." He said
further that he expected a local chapter of the
Black Panthers to be formed in Ann Arbor in a
few weeks, and until that time the Black Berets
would continue to operate under the guidel-
ine Black Panther Party.

Another concern of the street people who called
yesterday's press conference is the "rising use of
smack" (Heroin), and speed among young people"
between the ages of 15 and 20 in Ann Arbor. One
spokesman said that marijuana is short right now,
but the very dangerous drugs are being infil-
trri ;;) Ann Arbor in large quantities. The
spL.., ; blamed "state, federal and local narcs
(narcotics agents) for letting the drug scene dis-
integrate."

"I think the Treasury Department along with

the Mafia are cotttrolling drugs in this country,"
said one spokesman.

Another concefrn of the group yesterday was
the y/2- to 10-yeasr prison sentence in Detroit of
White Pa' ' '' '•" Sinclair for possession
of marijuan;), r .^a- snr.ed several times during
the one-hour conference that it was "obvious"
that Sinclair had hot been convicted because of
possession but rarther his political views and
activities.

"You have to destroy the existing structure to
create a new one . . . change that calls for peace,
justice, and welfare . . . people arc ' "••••% yet
we burn food . . . people alone are • ors of
history ... we arein't a threat to the people, but
we are their servant ..." were all statements
made during the comference by different individu-
als, trying to get the philosophy of the street people
in Ann Arbor across to the public.

Support of the recall movement against Wash-
tenaw County Sheriff Douglas J. Harvey was re-
affirmed by all the organizations represented. A
second petition will soon be circulated calling for
community control of the police. As with the
Harvey petition, 15,000 signatures will be needed
to get the community control of police issue placed
on the ballot.

"We believe and understand that the change is
so great and so radical that we must explain," said
Plamondon near the end of the conference. "Con-
fusion and separation are the main ways to keep
control," he added. The press conference had been
called yesterday in hopes of "eliminating the con-
fusion that exists, and educating the people fl

Ann Arbor street people were the "official
„ spokesmen" yesterday afternoon at a press confer-
i* ence at Trans-Love Energies Inc. when seven rep-
resentatives of different local organizations met with
the press to inform the public of a "loose working
alliance between the groups" represented, to handle
the alleged problem of police harassment and work

for better conditions in Ann Arbor. The spokesmen
were, left to right, Jeffrey Hoff and Terry Sheldon,
of Sunnygoode Stored r, innne; Terry Bagnoche
and Fred Stann of in Maulers Commune;

Gary Wilson and Kaymond Hayes of the Black
Berets; and Pun Plamondon, minister of defense of
the White Panthers.