Youth From Bellville Walks 2,023 Miles To Do His Thing 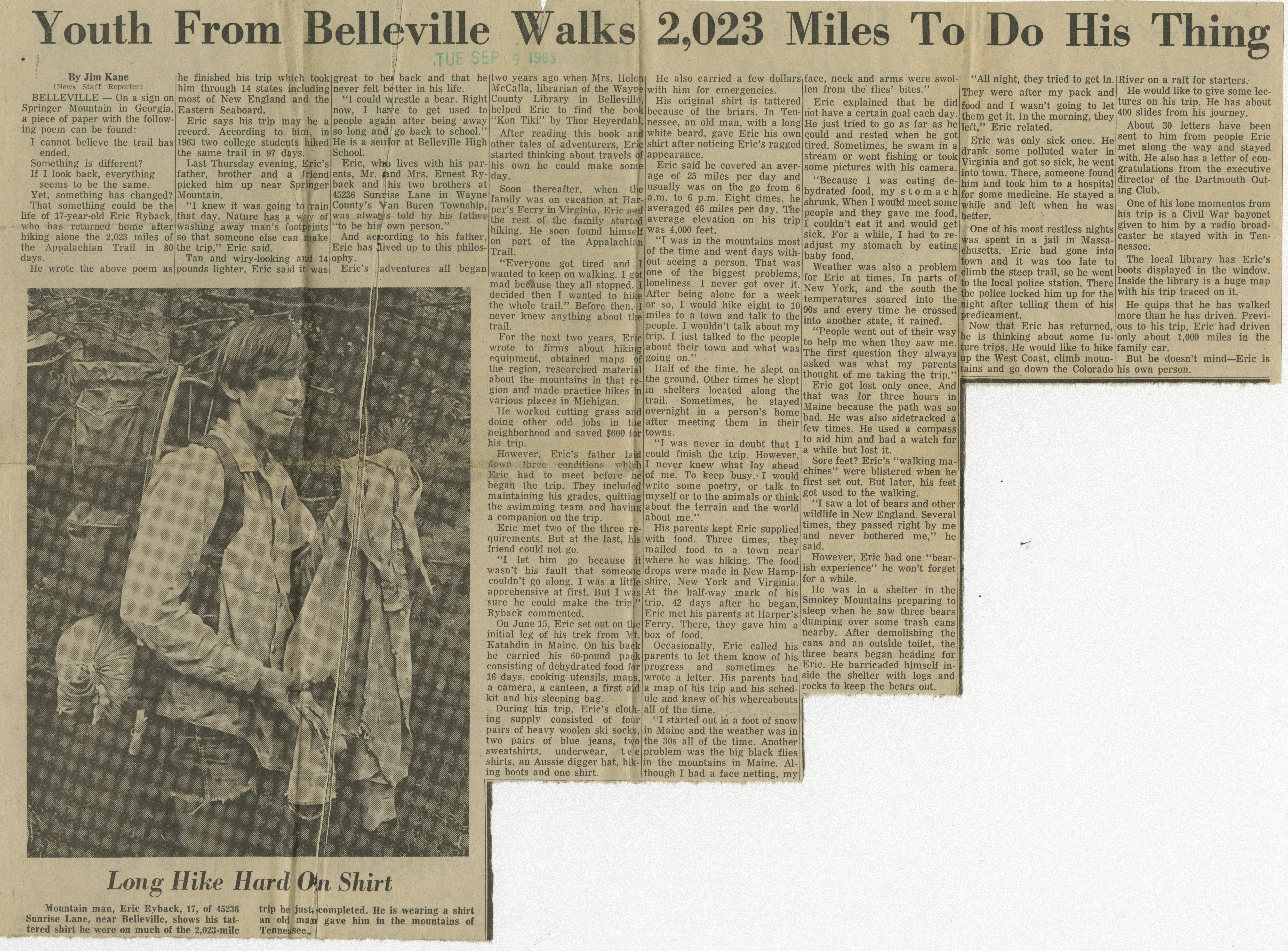 ﻿Youth From Belleville Walks 2,023 Miles To Do His Thing

BELLEVILLE — On a sign on Springer Mountain in Georgia, a piece of paper with the following poem can be found:

I cannot believe the trail has ended,
Something is different?
If I look back, everything seems to be the same.
Yet, something has changed?

That something could be the life of 17-year-old Eric Ryback, who has returned home after hiking alone the 2,023 miles of the Appalachian Trail in 80 days.

He wrote the above poem as he finished his trip which took him through 14 states including most of New England and the Eastern Seaboard.

Eric says his trip may be a record. According to him, in 1963 two college students hiked the same trail in 97 days.

Last Thursday evening, Eric’s father, brother and a friend picked him up near Springer Mountain.

“I knew it was going to rain that day. Nature has a way of washing away man’s footprints so that someone else can make the trip,” Eric said.

Tan and wiry-looking and 14 pounds lighter, Eric said it was great to be back and that he never felt better in his life.

‘‘I could wrestle a bear. Right now, I have to get used to people again after being away so long and go back to school.” He is a senior at Belleville High School.

Eric, who lives with his parents, Mr. and Mrs. Ernest Ryback and his two brothers at 45236 Sunrise Lane in Wayne County’s Van Buren Township, was always told by his father “to be his own person.”

And according to his father, Eric has lived up to this philosophy.

Eric’s adventures all began two years ago when Mrs. Helen McCalla, librarian of the Wayne County Library in Belleville helped Eric to find the book “Kon Tiki” by Thor Heyerdahl.

After reading this book and other tales of adventurers, Eric started thinking about travels of his own he could make some day.

Soon thereafter, when the family was on vacation at Harper’s Ferry in Virginia, Eric and the rest of the family started hiking. He soon found himself on part of the Appalachian Trail.

“Everyone got tired and I wanted to keep on walking. I got mad because they all stopped. I decided then I wanted to hike the whole trail.” Before then, I never knew anything about the trail.

For the next two years, Eric wrote to firms about hiking equipment, obtained maps of the region, researched material about the mountains in that region and made practice hikes in various places in Michigan.

He worked cutting grass and doing other odd jobs in the neighborhood and saved $600 for his trip.

However. Eric’s father laid down three conditions which Eric had to meet before he began the trip. They included maintaining his grades, quitting the swimming team and having a companion on the trip.

Eric met two of the three requirements. But at the last, his friend could not go.

“I let him go because it wasn’t his fault that someone couldn’t go along. I was a little apprehensive at first. But I was sure he could make the trip,” Ryback commented.

On June 15, Eric set out on the initial leg of his trek from Mt. Katahdin in Maine. On his back he carried his 60-pound pack consisting of dehydrated food for 16 days, cooking utensils, maps, a camera, a canteen, a first aid kit and his sleeping bag.

He also carried a few dollars with him for emergencies.

His original shirt is tattered because of the briars. In Tennessee, an old man, with a long white beard, gave Eric his own shirt after noticing Eric’s ragged appearance.

Eric said he covered an average of 25 miles per day and usually was on the go from 6 a.m. to 6 p.m. Eight times, he averaged 46 miles per day. The average elevation on his trip was 4,000 feet.

“I was in the mountains most of the time and went days without seeing a person. That was one of the biggest problems, loneliness. I never got over it. After being alone for a week or so, I would hike eight to 10 miles to a town and talk to the people. I wouldn’t talk about my trip. I just talked to the people about their town and what was going on.”

Half of the time, he slept on the ground. Other times he slept in shelters located along the trail. Sometimes, he stayed overnight in a person’s home after meeting them in their towns.

“I was never in doubt that I could finish the trip. However I never knew what lay ahead of me. To keep busy, I would write some poetry, or talk to myself or to the animals or think about the terrain and the world about me.”

His parents kept Eric supplied with food. Three times, they mailed food to a town near where he was hiking. The food drops were made in New Hampshire, New York and Virginia. At the half-way mark of his trip, 42 days after he began, Eric met his parents at Harper’s Ferry. There, they gave him a box of food.

Occasionally, Eric called his parents to let them know of his progress and sometimes he wrote a letter. His parents had a map of his trip and his schedule and knew of his whereabouts all of the time.

“I started out in a foot of snow in Maine and the weather was in the 30s all of the time. Another problem was the big black flies in the mountains in Maine. Although I had a face netting, my face, neck and arms were swollen from the flies’ bites.”

Eric explained that he did not have a certain goal each day. He just tried to go as far as he could and rested when he got tired. Sometimes, he swam in a stream or went fishing or took some pictures with his camera.

“Because I was eating dehydrated food, my stomach shrunk. When I would meet some people and they gave me food, I couldn’t eat it and would get sick. For a while, I had to readjust my stomach by eating baby food.

Weather was also a problem for Eric at times. In parts of New York, and the south the temperatures soared into the 90s and every time he crossed into another state, it rained.

“People went out of their way to help me when they saw me The first question they always asked was what my parents thought of me taking the trip.”

Eric got lost only once. And that was for three hours in Maine because the path was so bad. He was also sidetracked a few times. He used a compass to aid him and had a watch for a while but lost it.

Sore feet? Eric’s “walking machines” were blistered when he first set out. But later, his feet got used to the walking.

“I saw a lot of bears and other wildlife in New England. Several times, they passed right by me and never bothered me,” he said.

However, Eric had one “bearish experience” he won’t forget for a while.

He was in a shelter in the Smokey Mountains preparing to sleep when he saw three bears dumping over some trash cans nearby. After demolishing the cans and an outside toilet, the three bears began heading for Eric. He barricaded himself inside the shelter with logs and rocks to keep the bears out.

“All night, they tried to get in. They were after my pack and food and I wasn’t going to let them get it. In the morning, they left,” Eric related.

Eric was only sick once. He drank some polluted water in Virginia and got so sick, he went into town. There, someone found him and took him to a hospital for some medicine. He stayed a while and left when he was better.

One of his most restless nights was spent in a jail in Massachusetts. Eric had gone into town and it was too late to climb the steep trail, so he went to the local police station. There the police locked him up for the night after telling them of his predicament.

Now that Eric has returned, he is thinking about some future trips. He would like to hike up the West Coast, climb mountains and go down the Colorado River on a raft for starters.

He would like to give some lectures on his trip. He has about 400 slides from his journey.

About 30 letters have been sent to him from people Eric met along the way and stayed with. He also has a letter of congratulations from the executive director of the Dartmouth Outing Club.

One of his lone momentos from his trip is a Civil War bayonet given to him by a radio broadcaster he stayed with in Tennessee.

The local library has Eric’s boots displayed in the window. Inside the library is a huge map with his trip traced on it.

He quips that he has walked more than he has driven. Previous to his trip, Eric had driven only about 1,000 miles in the family car.

But he doesn’t mind—Eric is his own person.

Mountain man, Eric Ryback, 17, of 45236 Sunrise Lane, near Belleville, shows his tattered shirt he wore on much of the 2,023-mile trip he just completed. He is wearing a shirt an old man gave him in the mountains of Tennessee.