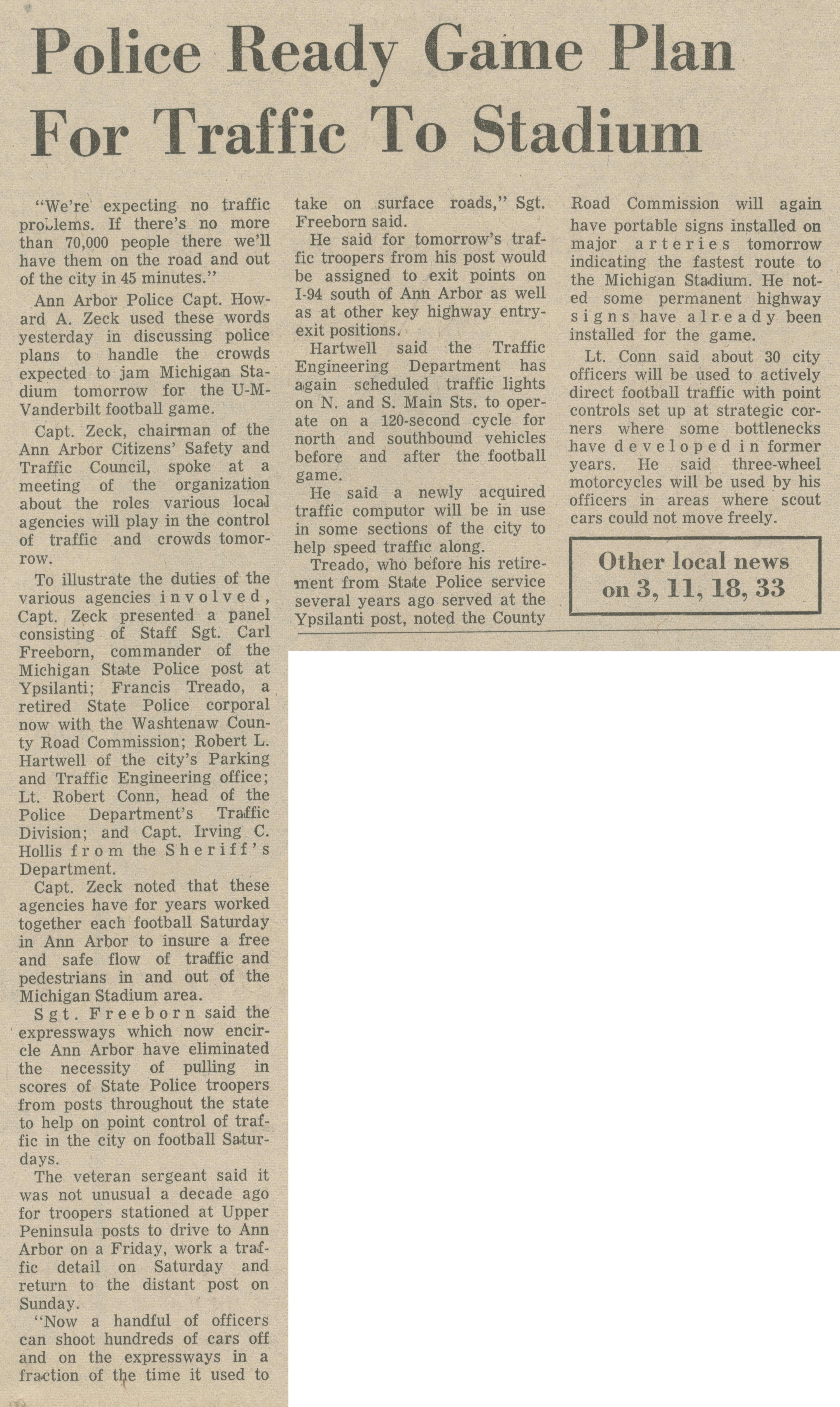 “We’re expecting no traffic problems. If there’s no more than 70,000 people there we’ll have them on the road and out of the city in 45 minutes.”

Capt. Zeck, chairman of the Ann Arbor Citizens’ Safety and Traffic Council, spoke at a meeting of the organization about the roles various local agencies will play in the control of traffic and crowds tomorrow.

Capt. Zeck noted that these agencies have for years worked together each football Saturday in Ann Arbor to insure a free and safe flow of traffic and pedestrians in and out of the Michigan Stadium area.

Sgt. Freeborn said the expressways which now encircle Ann Arbor have eliminated the necessity of pulling in scores of State Police troopers from posts throughout thes tate to help on point control of traffic in the city on football Saturdays.

The veteran sergeant said it was not unusual a decade ago for troopers stationed at Upper Peninsula posts to drive to Ann Arbor on a Friday, work on traffic detail on Saturday and return to the distant post on Sunday.

“Now a handful of officers can shoot hundreds of cars off and on the expressways in a fraction of the time it used to take on the service roads,” Sgt. Freeborn said.

He said for tomorrow’s traffic troopers from his post would be assigned to exit points on I-94 south of Ann Arbor as well as at other key highway entry-exit positions.

Hartwell said the Traffic Engineering Department has again scheduled traffic lights on N. and S. Main Sts. to operate on a 120-second cycle for north and southbound vehicles before and after the football game.

He said a newly acquired traffic computor will be in use in some sections of the city to help speed traffic along.

Treado, who before his retirement from State Police service several years ago served at the Ypsilanti post, noted the County Road Commission will again have portable signs installed on major arteries tomorrow indicating the fastest route to the Michigan Stadium. He noted some permanent highway signs have already been installed for the game.

Lt. Conn said about 30 city officers will be used to actively direct football traffic with point controls set up at strategic corners where some bottlenecks have developed in former years. He said three-wheel motorcycles will be used by his officers in areas where scout cars could not move freely.