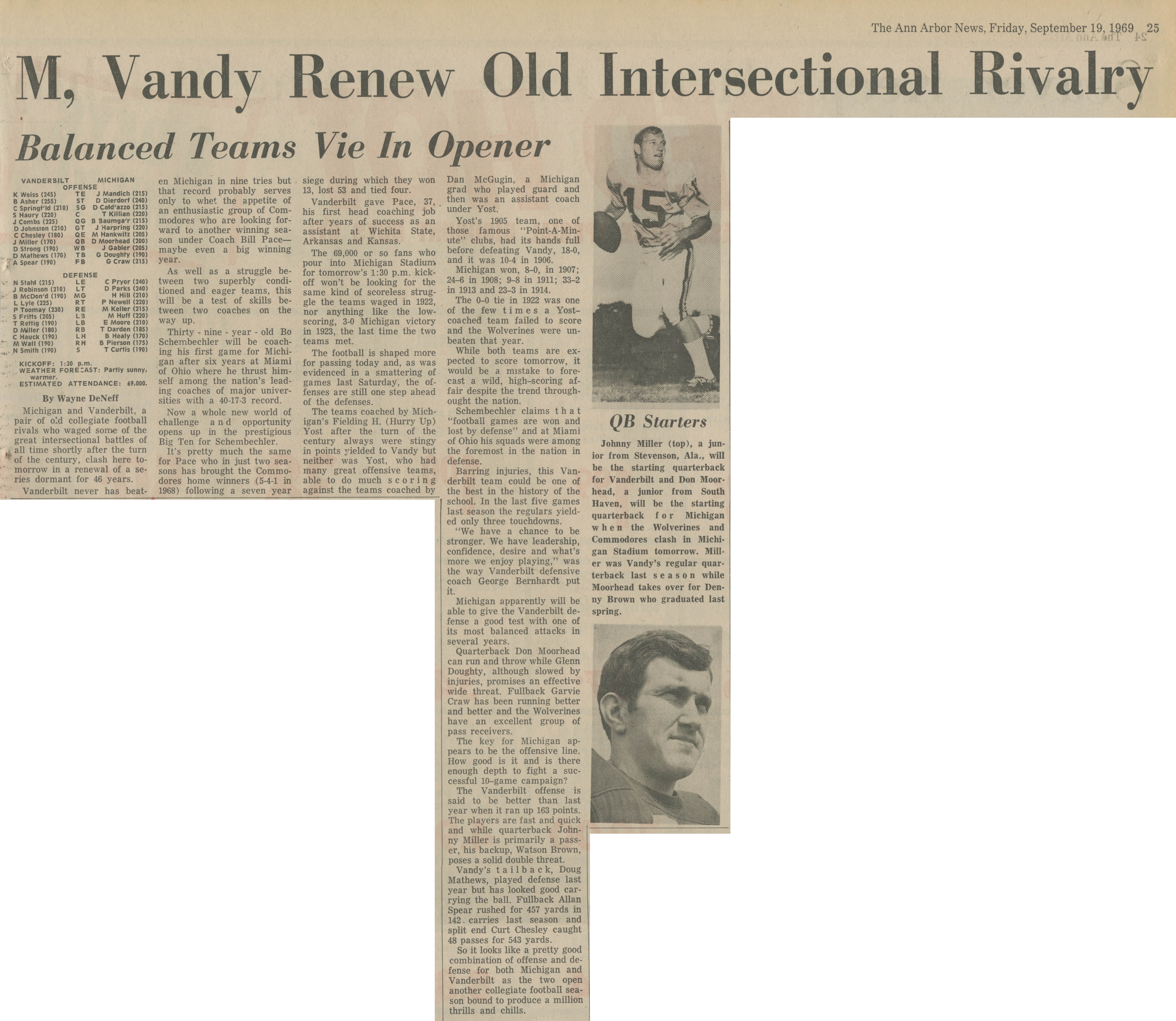 Michigan and Vanderbilt, a pair of old collegiate football rivals who waged some of the great intersectional battles of all time shortly after the turn of the century, clash here tomorrow in a renewal of a seres dormant for 46 years.

Vanderbilt never has beaten Michigan in nine tries but that record probably serves only to whet the appetite of an ethusiastic group of Commodores who are looking forward to another winning season under Coach Bill Pace—maybe even a big winning year.

As well as a struggle between two superbly conditioned and eager teams, this will be a test of skills between two coaches on the way up.

Thirty-nine-year-old Bo Schembechler will be coaching his first game for Michigan after six years at Miami of Ohio where he thrust himself among the nation’s leading coaches of major universities with a 40-17-3 record.

Now a whole new world of challenge and opportunity opens up in the prestigious Big Ten for Schembechler.

It’s pretty much the same for Pace who in just two seasons has brought the Commodores home winners (5-4-1 in 1968) following a seven year siege during which they won 13, lost 53 and tied four.

Vanderbilt gave Pace, 37, his first head coaching job after years of success as an assistant at Wichita State, Arkansas and Kansas.

The 69,000 or so fants who pour into Michigan Stadium for tomorrow’s 1:30 p.m. kickoff won’t be looking for the same kind of scoreless struggle the teams waged in 1922, nor anything like the low-scoring, 3-0 Michigan victory in 1923, the last time the two teams met.

The football is shaped more for passing today and, as was evidenced in a smattering of games last Saturday, the offenses are still one step ahead of the defenses.

The teams coached by Michigan’s Fielding H. (Hurry Up) Yost after the turn of the century always were stingy in points yielded to Vandy but neither was Yost, who had many great offensive teams, able to do much scoring against the teams coached by Dan McGugin, a Michigan grad who played guard and then was an assistant coach under Yost.

The 0-0 tie in 1922 was one of the few times a Yost-coached team failed to score and the Wolverines were unbeaten that year.

While both teams are expected to score tomorrow, it would be a mistake to forecast a wild, high-scoring affair despite the trend throughout the nation.

Schembechler claims that “football games are won and lost by defense” and at Miami of Ohio has squads were among the foremost in the nation in defense.

Barring in juries, this Vanderbilt team could be one of the best in the history of the school. In the last five games last season the regulars yielded only three touchdowns.

“We have a chance to be stronger. We have leadership, confidence, desire and what’s more we enjoy playing,” was the way Vanderbilt defensive coach George Bernhardt put it.

Michigan apparently will be able to give the Vanderbilt defense a good test with one of its most balanced attacks in several years.

Quarterback Don Moorhead can run and throw while Glenn Doughty, although slowed by injuries, promises an effective wide threat. Fullback Garvie Craw has been running better and better and the Wolverines have an excellent group of pass receivers.

The key for Michigan appears to be the offensive line. How good is it and is there enough depth to fight a successful 10-game campaign?

The Vanderbilt offense is said to be better than last year when it ran up 163 points. The players are fast and quick and while quarterback Johnny Miller is primarily a passer, his backup, Watson Brown, poses a solid double threat.

So it looks like a pretty good combination of offense and defense for both Michigan and Vanderbilt as the two open another collegiate football season bound to produce a million thrills and chills.

PHOTO CAPTION: QB Starters: Johnny Miller (top), a junior from Stevenson, Ala., will be the starting quarterback for Vanderbilt and Don Moorhead, a junior from South Haven, will be the starting quarterback for Michigan when the Wolverines and Commodores clash in Michigan Stadium tomorrow. Miller was Vandy’s regular quarterback last season while Moorhead takes over for Denny Brown who graduated last spring.