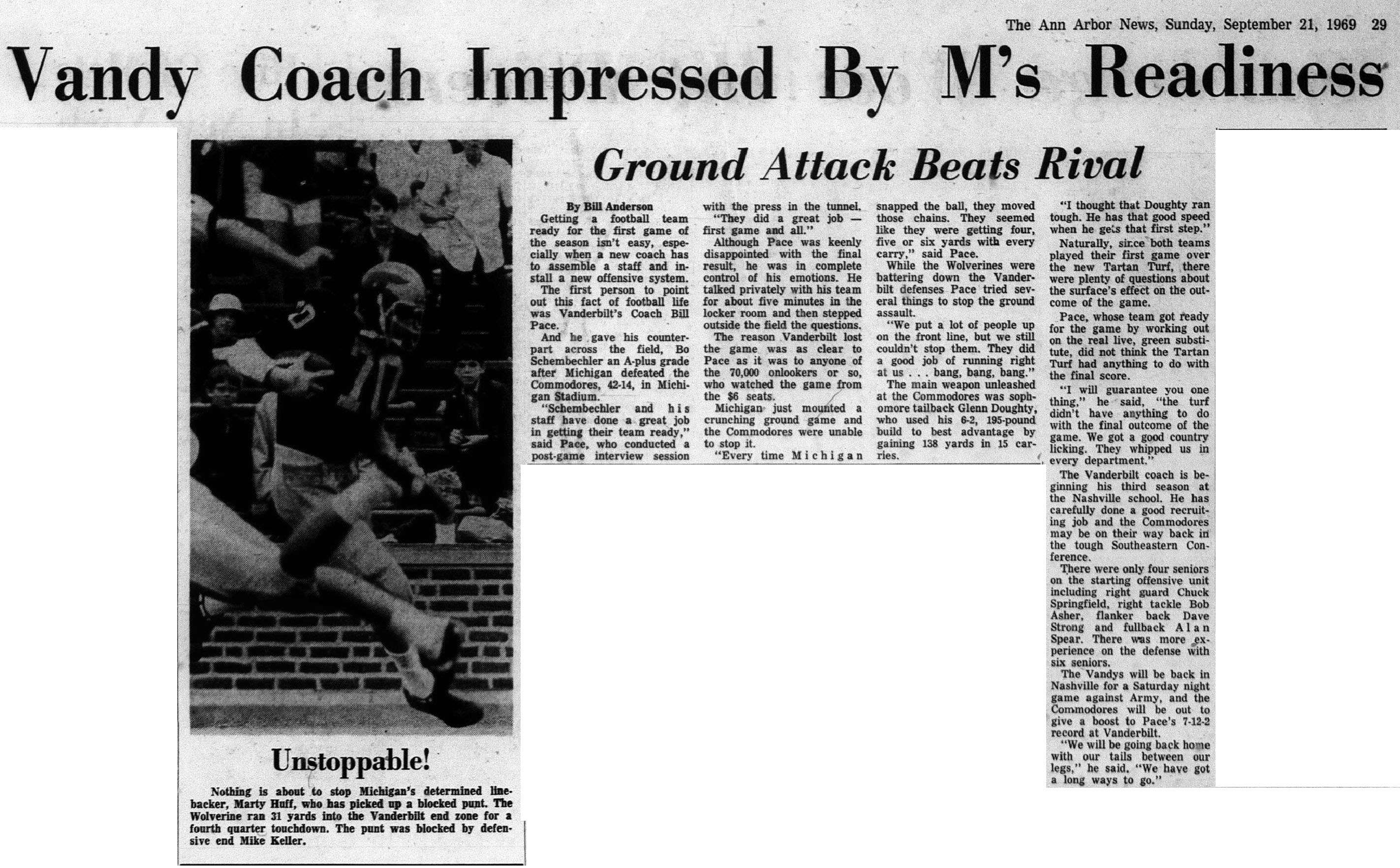 Getting a football team ready for the first game of the season isn’t easy, especially when a new coach has to assemble a staff and install a new offensive system.
The first person to point out this fact of football life was Vanderbilt’s Coach Bill Pace.
And he gave his counterpart across the field, Bo Schembechler an A-plus grade after Michigan defeated the Commodores, 42-14, in Michigan Stadium.
“Schembechler and his staff have done a great job in getting their team ready,” said Pace, who conducted a post-game interview session with the press in the tunnel.
“They did a great job—first game and all.”
Although Pace was keenly disappointed with the final result, he was in complete control of his emotions. He talked privately with his team for about five minutes in the locker room and then stepped outside to field the questions.
The reason Vanderbilt lost the game was as clear to Pace as it was to anyone of the 70,000 onlookers or so, who watched the game from the $6 seats.
Michigan just mounted a crunching ground game and the Commodores were unable to stop it.
“Every time Michigan snapped the ball, they moved those chains. They seemed like they were getting four, five or six yards with every carry,” said Pace.
While the Wolverines were battering down the Vanderbilt defenses Pace tried several things to stop the ground assault.
“We put a lot of people up on the front line, but we still couldn’t stop them. They did a good job of running right at us… bang, bang, bang.” The main weapon unleashed at the Commodores was sophomore tailback Glenn Doughty, who used his 6-2, 195-pound build to best advantage by gaining 138 yards in 15 carries.
“I thought that Doughty ran tough. He has that good speed when he gets that first step.”
Naturally, since both teams played their first game over the new Tartan Turf, there were plenty of questions about the surface’s effect on the outcome of the game.
Pace, whose team got ready for the game by working out on the real, live, green substitute, did not think the Tartan Turf had anything to do with the final score.
“I will guarantee you one thing,” he said, “the turf didn’t have anything to do with the final outcome of the game. We got a good country licking. They whipped us in every department.”
The Vanderbilt coach is beginning his third season at the Nashville school. He has carefully done a good recruiting job and the Commodores may be on their way back in the tough Southeastern Conference.
There were only four seniors on the starting offensive unit including right guard Chuck Springfield, right tackle Bob Ashler, flanker back Dave Strong and fullback Alan Spear. There was more experience on the defense with six seniors.
The Vandys will be back in Nashville for a Saturday night game against Army, and the Commodores will be out to give a boost to Pace’s 7-12-2 record at Vanderbilt.
“We will be going back home with our tails between our legs,” he said. “We have got a long ways to go.”

PHOTO CAPTION: Unstoppable!: Nothing is about to stop Michigan’s determined linebacker, Marty Huff, who has picked up a blocked punt. The Wolverine ran 31 yards into the Vanderbilt end zone for a fourth quarter touch down. The punt was blocked by defensive end Mike Keller.