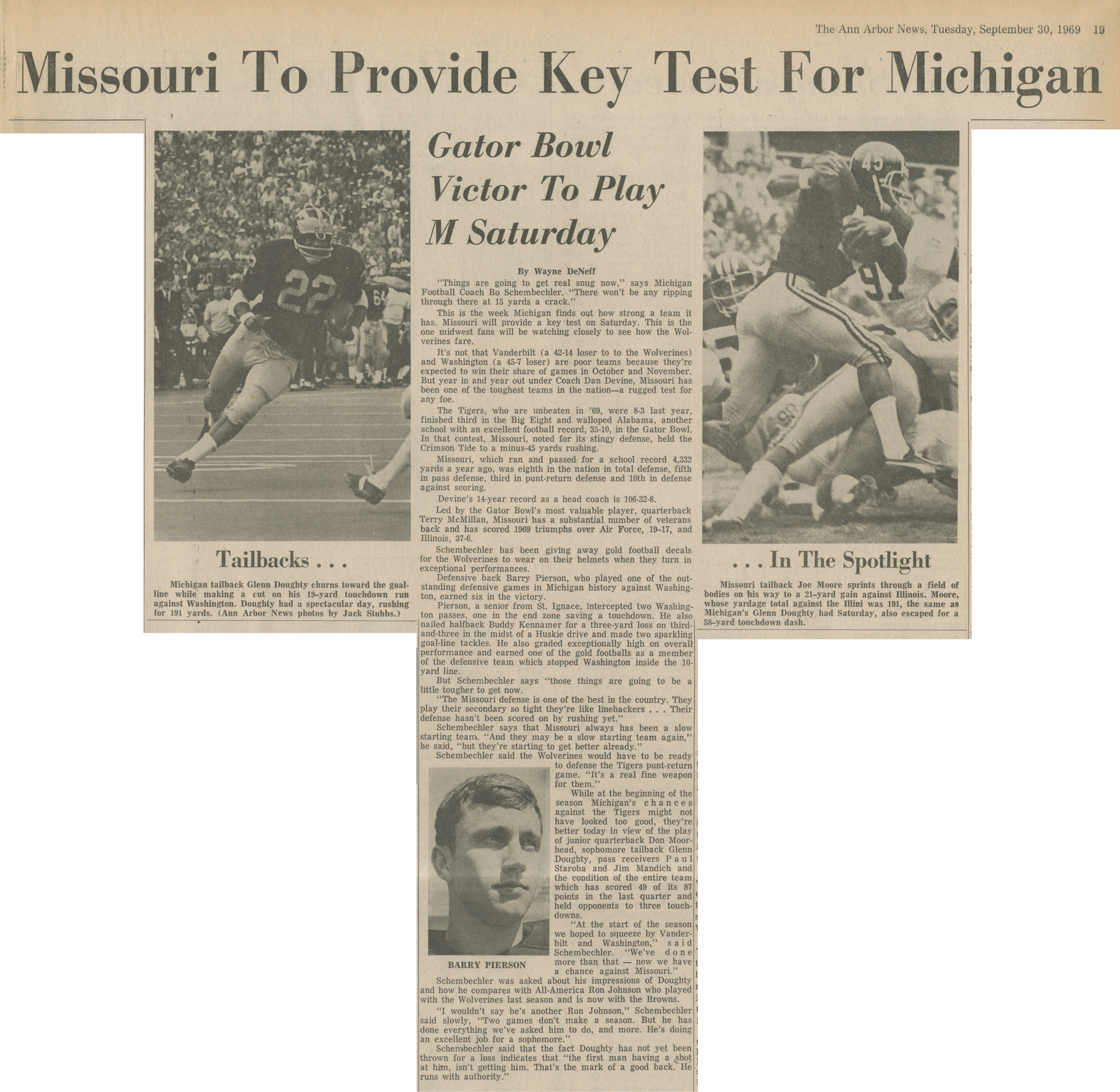 Gator Bowl Victor To Play M Saturday
By Wayne DeNeff
"Things are going to get real snug now," says Michigan Football Coach Bo Schembechler. "There won't be any ripping through there at 15 yards a crack."

This is the week Michigan finds out how strong a team it has. Missouri will provide a key test on Saturday. This is the one midwest fans will be watching closely to see how the Wolverines fare.

It's not that Vanderbilt (a 42-14 loser to the Wolverines) and Washington (a 45-7 loser) are poor teams because they're expected to win their share of games in October and November. But year in and year out under Coach Dan Devine, Missouri has been one of the toughest teams in the nation - a rugged test for any foe.

The Tigers, who are unbeaten in '69, were 8-3 last year, finished third in the Big Eight and walloped Alabama, another school with an excellent football record, 35-10, in the Gator Bowl. In that contest, Missouri, noted for its stingy defense, held the Crimson Tide to a minus-45 yards rushing.

Missouri, which ran and passed for a school record 4,332 yards a year ago, was eighth in the nation in total defense, fifth in pass defense, third in punt-return defense and 10th in defense against scoring.

Led by the Gator Bowl's most valuable player, quarterback Terry McMillan, Missouri has a substantial number of veterans back and has scored 1969 triumphs over Air Force, 19-17, and Illinois, 37-6.

Schembechler has been giving away gold football decals for the Wolverines to wear on their helmets when they turn in exceptional performances.

Defensive back Barry Pierson, who played one of the outstanding defensive games in Michigan history against Washington, earned six in the victory.

Pierson, a senior from St. Ignace, intercepted two Washington passes, one in the end zone saving a touchdown. He also nailed halfback Buddy Kennamer for a three-yard loss on third-and-three in the midst of a Huskie drive and made two sparkling goal-line tackles. He also graded exceptionally high on overall performance and earned one of the gold footballs as a member of the defensive team which stopped Washington inside the 10-yard line.

But Schembechler says "those things are going to be a little tougher to get now.

"The Missouri defense is one of the best in the country. They play their secondary so tight they're like linebackers...Their defense hasn't been scored on by rushing yet."

Schembechler said the Wolverines would have to be ready to defense the Tigers punt-return game. "It's a real fine weapon for them."

While at the beginning of the season Michigan's chances against the Tigers might not have looked too good, they're better today in view of the play of junior quarterback Don Moorhead, sophomore tailback Glenn Doughty, pass receivers Paul Staroba and Jim Mandich and the condition of the entire team which has scored 49 of its 87 points in the last quarter and held opponents to three touchdowns.

"At the start of the season we hoped to squeeze by Vanderbilt and Washington," said Schembechler. "We've done more than that - now we have a chance against Missouri."

Schembechler was asked about his impressions of Doughty and how he compares with All-America Ron Johnson who played with the Wolverines last season and is now with the Browns.

"I wouldn't say he's another Ron Johnson," Schembechler said slowly, "Two games don't make a season. But he has done everything we've asked him to do, and more. He's doing an excellent job for a sophomore."

Schembechler said that the fact Doughty has not yet been thrown for a loss indicates that "the first man having a shot at him, isn't getting him. That's the mark of a good back. He runs with authority."

Tailbacks...
Michigan tailback Glenn Doughty churns toward the goal-line while making a cut on his 19-yard touchdown run against Washington. Doughty had a spectacular day, rushing for 191 yards. (Ann Arbor News photos by Jack Stubbs.)

...In The Spotlight
Missouri tailback Joe Moore sprints through a field of bodies on his way to a 21-yard gain against Illinois. Moore, whose yardage total against the Illini was 191, the same as Michigan's Glenn Doughty had Saturday, also escaped for a 58-yard touchdown dash.