Mandich Honored For Play Against Purdue 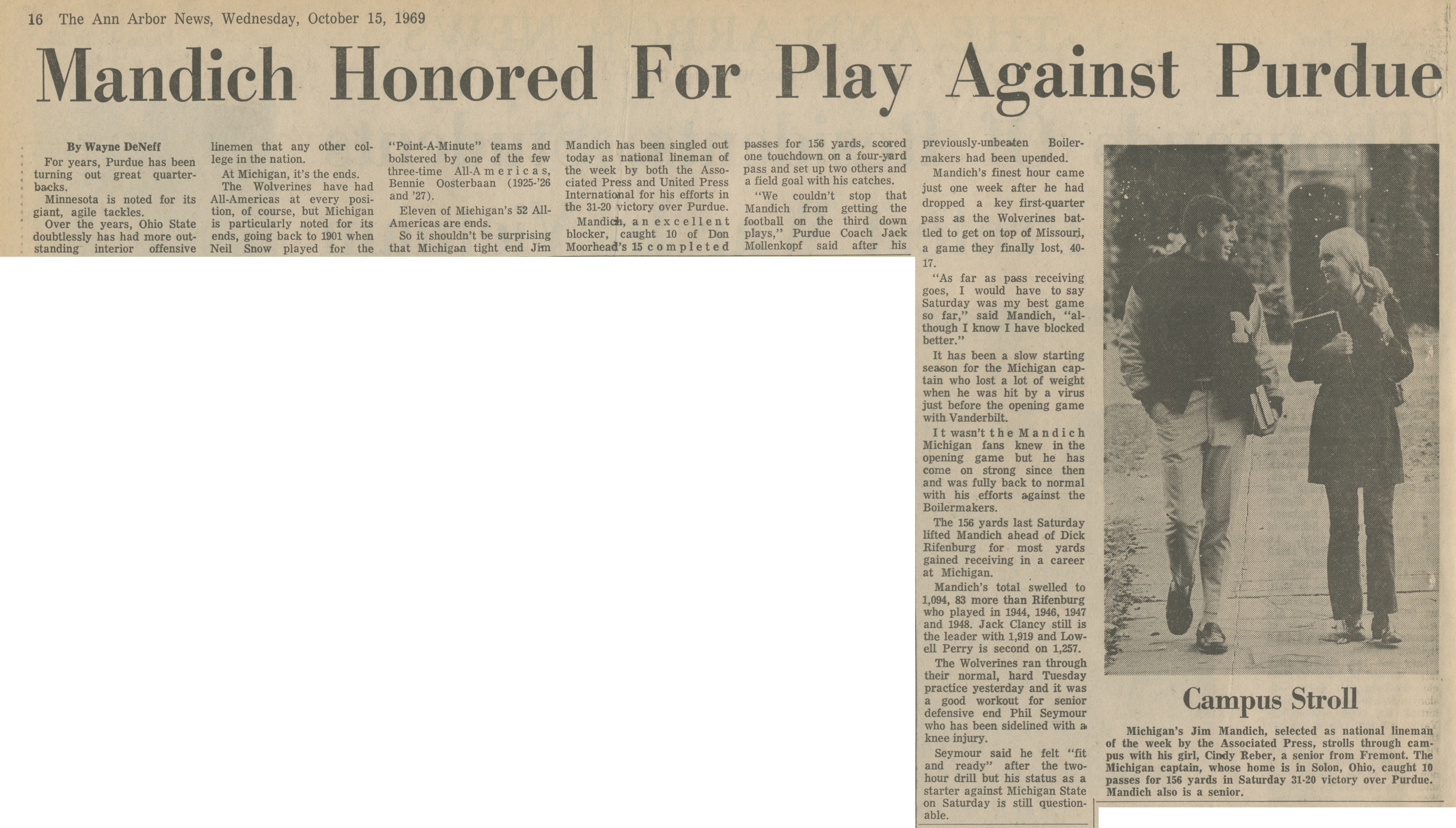 MANDICH HONORED FOR PLAY AGAINST PURDUE

For years, Purdue has been turning out great quarterbacks.

Minnesota is noted for its giant, agile tackles.

Over the years, Ohio State doubtlessly has had more outstanding interior offensive linemen than any other college in the nation.

At Michigan, it’s the ends.

The Wolverines have had All-Americas at every possible position, of course, but Michigan is particularly noted for its ends, going back to 1901 when Neil Snow played for the “Point-a-Minute” teams and bolstered by one of the few three-time All-Americas, Bennie Oosterbaan (1925-’26 and ’27).

Eleven of Michigan’s 52 All-Americas are ends.

So it shouldn’t be surprising that Michigan tight end Jim Mandich has been singled out today as national lineman of the week by both the Associated Press and United Press International for his efforts in the 31-20 victory over Purdue.

Mandich, an excellent blocker, caught 10 of Don Moorhea’ds 15 completed passes for 156 yards, scored one touchdown on a four-yard pass and set up two others and a field goal with his catches.

“We couldn’t stop that Mandich from getting the football on the third down plays,” Purdue Coach Jack Mollenkopf said after his previously-unbeaten Boilermakers had been upended.

Mandich’s finest hour came just one week after he had dropped a key first-quarter pass as the Wolverines battled to get on top of Missouri, a game they finally lost, 40-17.

“As far as pass receiving goes, I would have to say Saturday was my best game so far,” said Mandich, “although I know I have blocked better.”

It has been a slow starting season for the Michigan captain who lost a lot of weight when he was hit by a virus just before the opening game with Vanderbilt.

It wasn’t the Mandich Michigan fans knew in the opening game but he has come on strong since then and was fully back to normal with his efforts against the Boilermakers.

The 156 yards last Saturday lifted Mandich ahead of Dick Rifenburg for most yards gained receiving in a career at Michigan.

The Wolverines ran through their normal, hard Tuesday practice yesterday and it was a good workout for senior defensive end Phil Seymour who has been sidelined with a knee injury.

Seymour said he felt “fit and ready” after the two-hour drill but his status as a starter against Michigan State on Saturday is still questionable.

PHOTO CAPTION: Campus Stroll: Michigan’s Jim Mandich, selected as national lineman of the week by the Associated Press, strolls through campus with his girl, Cindy Reber, a senior from Fremont. The Michigan captain, whose home is in Solon, Ohio, caught 10 passes for 156 yards in Saturday’s 31-20 victory over Purdue. Mandich is also a senior.