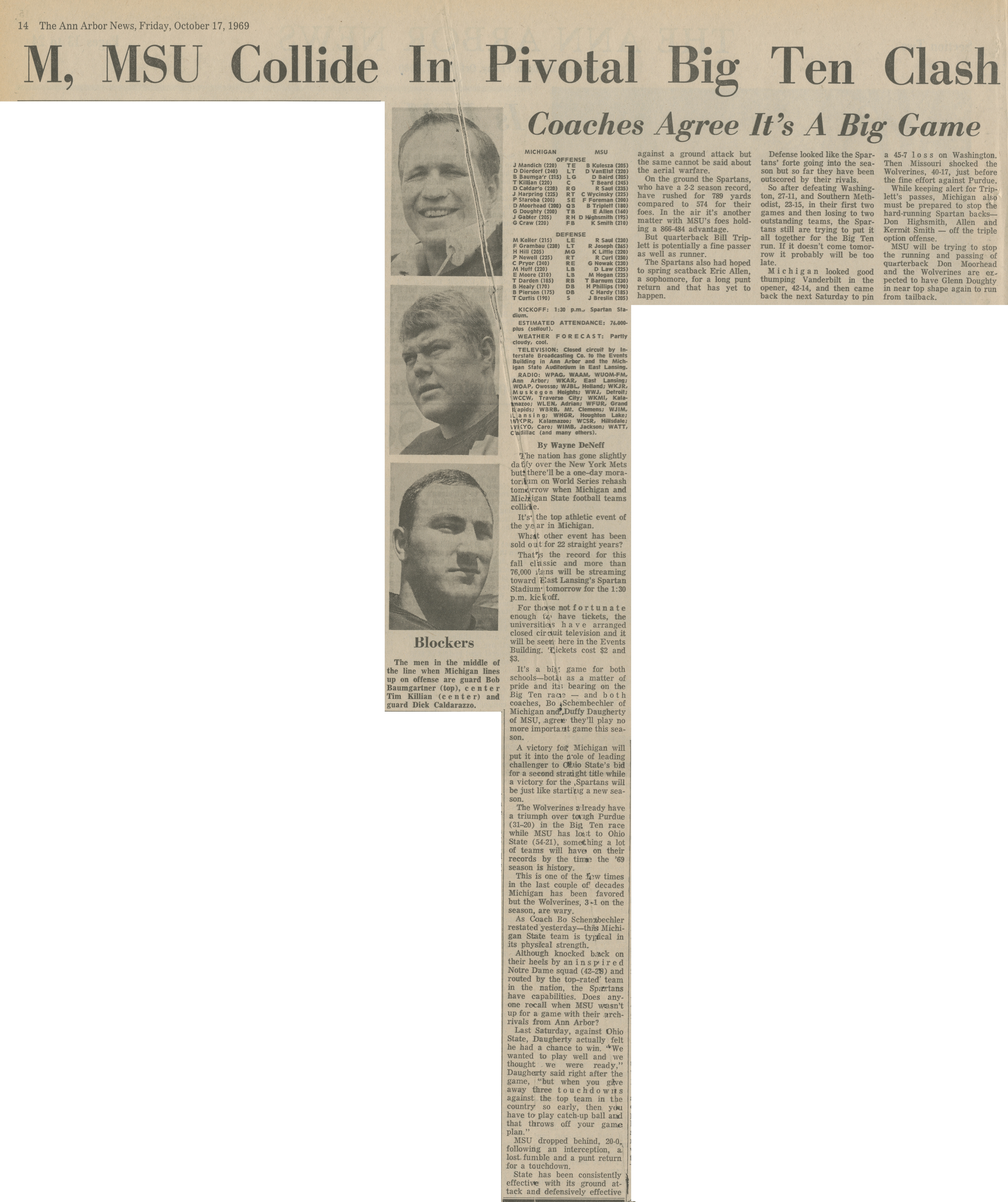 The nation has gone slightly daffy over the New York Mets but there’ll be a one-day moratorium on World Series rehash tomorrow when Michigan and Michigan State football teams collide.
It’s the top athletic event of the year in Michigan.
What other event has been sold out for 22 straight years?
That’s the record for this fall classic and more than 76,000 fans will be streaming toward East Lansing’s Spartan Stadium tomorrow for the 1:30 p.m. kickoff.
For those not fortunate enough to have tickets, the universities have arranged closed circuit television and it will be seen here in the Events Building. Tickets cost $2 and $3.
It’s a big game for both schools—both as a matter of pride and its bearing on the Big Ten race—and both coaches, Bo Schembechler of Michigan and Duffy Daugherty of MSU, agree they’ll play no more important game this season.
A victory for Michigan will put it into the role of leading challenger to Ohio State’s bid for a second straight title while a victory for the Spartans will be just like starting a new season.
The Wolverine’s already have a triumph over tough Purdue (31-20) in the Big Ten race while MSU has lost to Ohio State (54-21), something a lot of teams will have on their records by the time the ’69 season is history.
This is one of the few times in the last couple of decades Michigan has been favored but the Wolverines, 3-1 on the season, are wary.
As Coach Bo Schembechler restated yesterday—this Michigan State team is typical in its physical strength.
Although knocked back on their heels by an inspired Notre Dame squad (42-28) and routed by the top-rated team in the nation, the Spartans have capabilities. Does anyone recall when MSU wasn’t up for a game with their archrivals from Ann Arbor?
Last Saturday, against Ohio State, Daugherty actually felt he had a chance to win. “We wanted to play well and we thought we were ready,” Daugherty said right after the game, “but when you give away three touchdowns against the top team in the country so early, then you have to play catch-up ball and that throws off your game plan.”
MSU dropped behind 20-0, following an interception, a lost fumble and a punt return for a touchdown.
State has been consistently effective with its ground attack and defensively effective against a ground attack but the same cannot be said about the aerial warfare.
On the ground the Spartans, who have a 2-2 season record, have rushed for 789 yards compared to 574 for their foes. In the air it’s another matter with MSU’s foes holding a 866-484 advantage.
But quarterback Bill Triplett is potentially a fine passer as well as runner.
The Spartans had hoped to spring scat back Eric Allen, a sophomore, for a long punt return and that has yet to happen.
Defense looked like the Spartans’ forte going into the season but so far they have been outscored by their rivals.
So after defeating Washington, 27-11, and Southern Methodist, 23-15, in their first two games and then losing to two outstanding teams, the Spartans still are trying to put it all together for the Big Ten run. If it doesn’t come tomorrow it probably will be too late.
Michigan looked good thumping Vanderbilt in the opener, 42-14, and then came back the next Saturday to pin a 45-7 loss on Washington. Then Missouri shocked the Wolverines, 40-17, just before the fine effort against Purdue.
While keeping alert for Triplett’s passes, Michigan also must be prepared to stop the hard-running Spartan backs—Don Highsmith, Allen and Kermit Smith—off the triple option offense.
MSU will be trying to stop the running and passing of quarterback Don Moorhead and the Wolverines are expected to have Glenn Doughty in near top shape again to run from tailback.