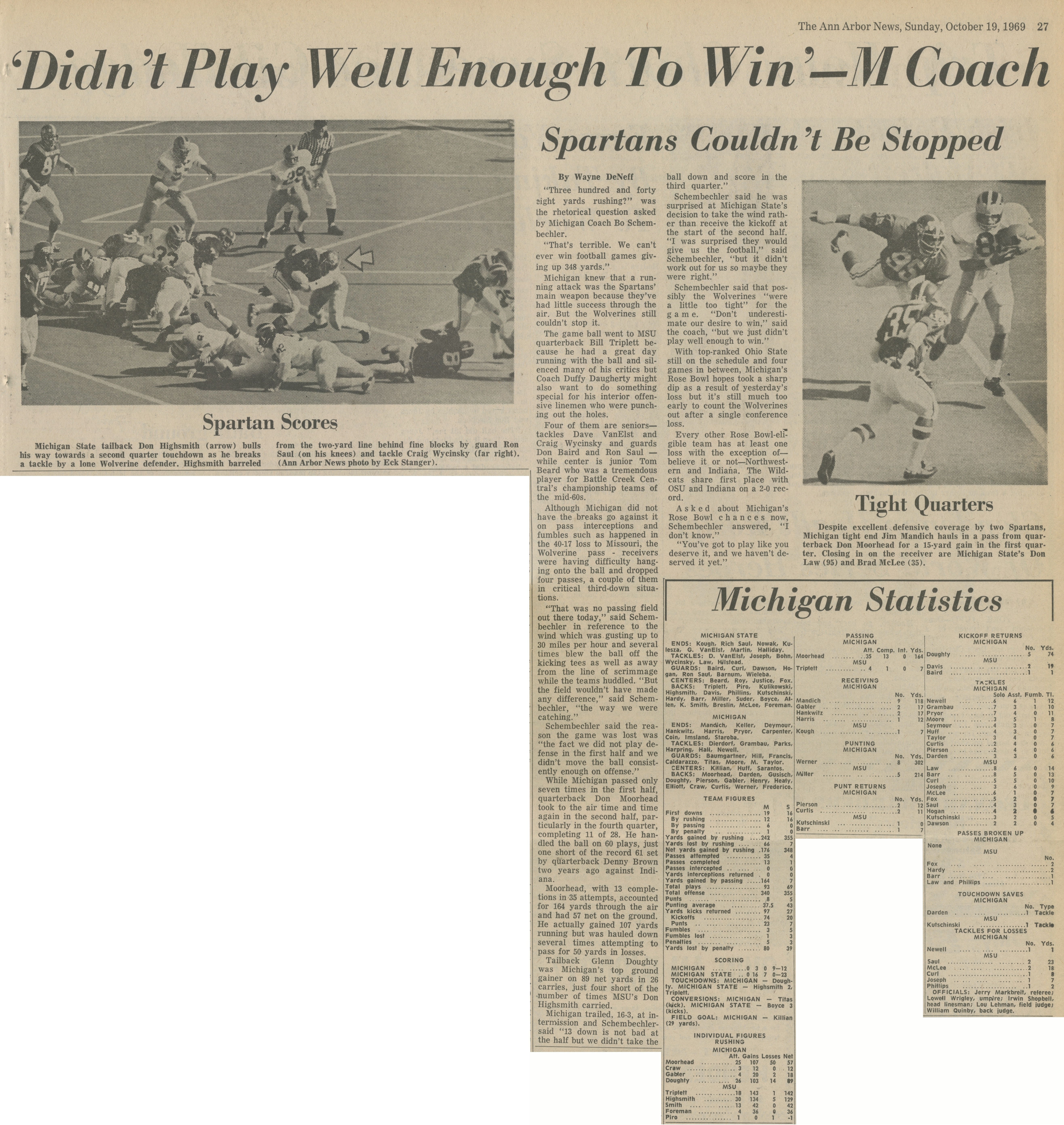 “Three hundred and forty eight yards rushing?” was the rhetorical question asked by Michigan Coach Bo Schembechler.
“That’s terrible. We can’t ever win football games giving up 348 yards.”
Michigan knew that a running attack was the Spartans’ main weapon because they’ve had little success through the air. But the Wolverines still couldn’t stop it.
The game ball went to MSU quarterback Bill Triplett because he had a great day running with the ball and silenced many of his critics but Coach Duffy Daugherty might also want to do something special for his interior offensive linemen who were punching out the holes.
Four of them are seniors—tackles Dave VanElst and Craig Wycinsky and guards Don Baird and Ron Saul—while center is junior Tom Beard who was a tremendous player for Battle Creek Central’s championship teams of the mid-60s.
Although Michigan did not have the breaks go against it on pass interceptions and fumbles such as happened in the 40-17 loss to Missouri, the Wolverine pass-receivers were having difficulty hanging onto the ball and dropped four passes, a couple of them in critical third-down situations.
“That was no passing field out there today,” said Schembechler in reference to the wind which was gusting up to 30 miles per hour and several times blew the ball off the kicking tees as well as away from the line of scrimmage while the teams huddled. “But the field wouldn’t have made any difference,” said Schembechler, “the way we were catching.”
Schembechler said the reason the game was lost was “the fact we did not play defense in the first half and we didn’t move the ball consistently enough on offense.”
While Michigan passed only seven times in the first half, quarterback Don Moorhead took to the air time and time again in the second half, particularly in the fourth quarter, completing 11 of 28. He handled the ball on 60 plays, just one short of the record 61 set by quarterback Denny Brown two years ago against Indiana.
Moorhead, with 13 completions in 35 attempts, accounted for 164 yards through the air and had 57 net on the ground. He actually gained 107 yards running but was hauled down several times attempting to pass for 50 yards in losses.
Tailback Glenn Doughty was Michigan’s top ground gainer on 89 net yards in 26 carries, just four short of the number of times MSU’s Don Highsmith carried.
Michigan trailed, 16-3 at intermission and Schembechler said “13 down is not bad at the half but we didn’t take the ball down and score in the third quarter.”
Schembechler said he was surprised at Michigan State’s decision to take the wind rather than receive the kickoff at the start of the second half. “I was surprised they would give us the football,” said Schembechler, “but it didn’t work out for us so maybe they were right.”
Schembechler said that possibly the Wolverines “were a little too tight” for the game. “Don’t underestimate our desire to win,” said the coach, “but we just didn’t play well enough to win.”
With top-ranked Ohio State still on the schedule and four games in between, Michigan’s Rose Bowl hopes took a sharp dip as a result of yesterday’s loss but it’s still much too early to count the Wolverines out after a single conference loss.
Every other Rose Bowl-eligible team has at least one loss with the exception of—believe it or not—Northwestern and Indiana. The Wildcats share first place with OSU and Indiana on a 2-0 record.
Asked about Michigan’s Rose Bowl chances now, Schembechler answered, “I don’t know.”
“You’ve got to play like you deserve it and we haven’t deserved it yet.”

PHOTO CAPTION 2: Tight Quarters: Despite excellent defensive coverage by two Spartans, Michigan tight end Jim Mandich hauls in a pass from quarterback Don Moorhead for a 15-yard gain in the first quarter. Closing in on the receiver are Michigan State’s Don Law (95) and Brad McLee (35).