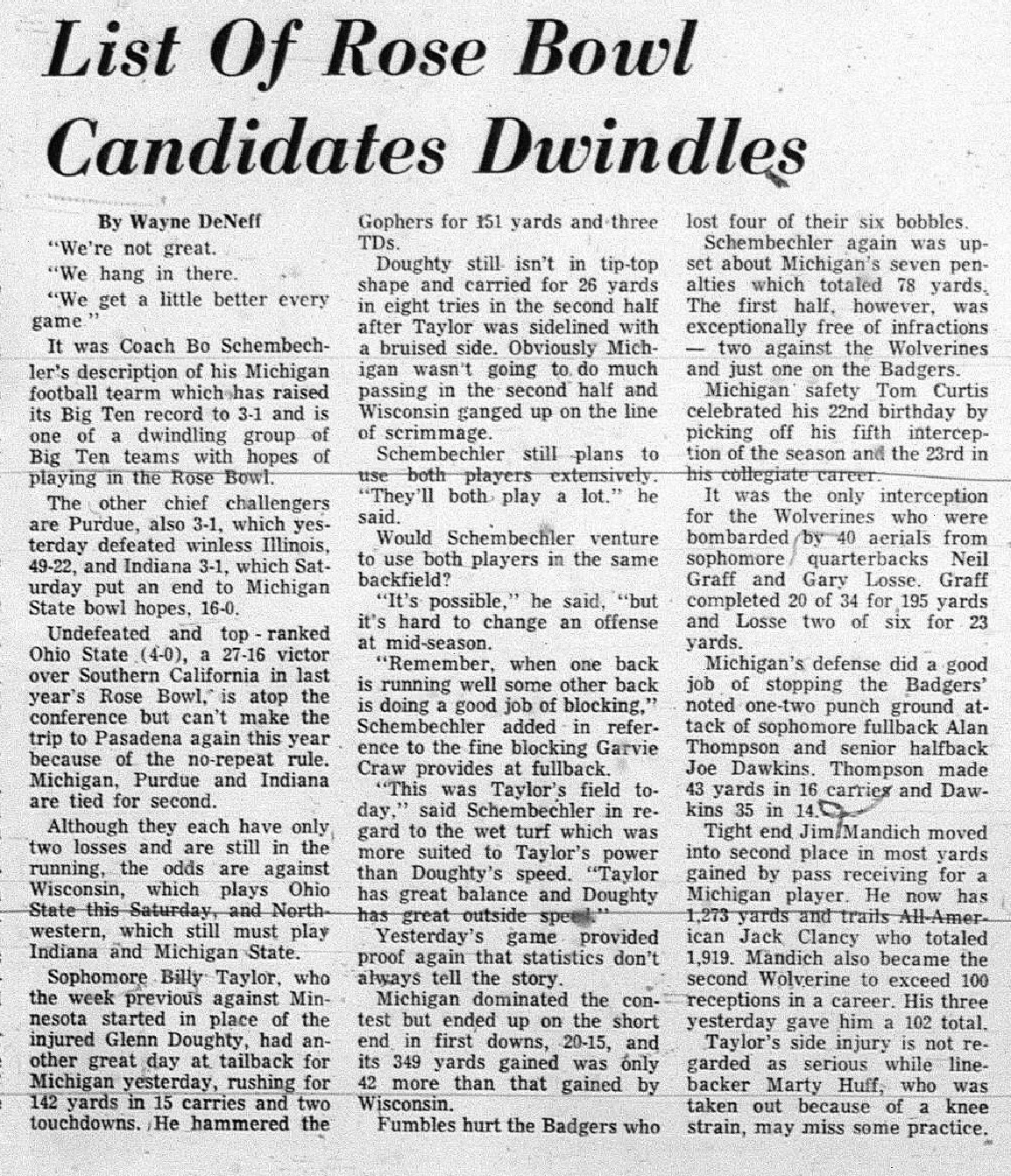 “We hang in there.

“We get a little better every game.”

It was Coach Bo Schembechler’s description of his Michigan football team which has raised its Big Ten record to 3-1 and is one of a dwindling group of Big Ten teams with hopes of playing in the Rose Bowl.

The other chief challengers are Purdue, also 3-1, which yesterday defeated winless Illinois, 49-22, and Indiana 3-1, which Saturday put an end to Michigan State bowl hopes, 16-0.

Undefeated and top-ranked Ohio State (4-0), a 27-16 victor over Southern California in last year’s Rose Bowl is atop the conference but can’t make the trip to Pasadena again this year because of the no-repeat rule. Michigan, Purdue and Indiana are tied for second.

Although they each have only two losses and are still in the running, the odds are against Wisconsin, which plays Ohio State this Saturday, and Northwestern, which still must play Indiana and Michigan State.

Sophomore Billy Taylor, who the week previous against Minnesota started in place of the injured Glenn Doughty, had another great day at tailback for Michigan yesterday, rushing for 142 yards in 15 carries and two touchdowns. He hammered the Gophers for 151 yards and three TDs.

Doughty still isn’t in tip-top shape and carried for 26 yards in eight tries in the second half after Taylor was sidelined with a bruised side. Obviously Michigan wasn’t going to do much passing in the second half and Wisconsin ganged up on the line of scrimmage.

Schembechler still plans to use both players extensively. “They’ll both play a lot,” he said.

Would Schembechler venture to use both players in the same backfield?

“It’s possible,” he said, “but it’s hard to change an offense at mid-season.

“Remember, when one back is running well some other back is doing a good job of blocking,” Schembechler added in reference to the fine blocking Garvie Craw provides at fullback.

“This was Taylor’s field today,” said Schembechler in regard to the wet turf which was more suited to Taylor’s power than Doughty’s speed. “Taylor has great balance and Doughty has great outside speed.”

Michigan dominated the contest but ended up on the short end in first downs, 20-15, and its 349 yards gained was only 42 more than gained by Wisconsin.

Fumbles hurt the Badgers who lost four of their six bobbles.

Schembechler again was upset about Michigan’s seven penalties which totaled 78 yards. The first half, however, was exceptionally free of infractions—two against the Wolverines and just one on the Badgers.

Michigan safety Tom Curtis celebrated his 22nd birthday by picking off his fifth interception of the season and the 23rd in his collegiate career.

It was the only interception for the Wolverines who were bombarded by 40 aerials from sophomore quarterbacks Neil Graff and Gary Losse. Graff completed 20 of 34 for 195 yards and Losse two of six for 23 yards.

Michigan’s defense did a good job of stopping the Badgers’ noted one-two punch ground attack of sophomore fullback Alan Thompson and senior halfback Joe Dawkins. Thompson made 43 yards in 16 carries and Dawkins 35 in 14.

Tight end Jim Mandich moved into second place in most yards gained by pass receiving for a Michigan player. He now has 1,273 yards and trails All-American Jack Clancy who totaled 1,919. Mandich also became the second Wolverine to exceed 100 receptions in a career. His three yesterday gave him a 102 total.

Taylor’s side injury is not regarded as serious while linebacker Marty Huff, who was taken out because of a knee strain, may miss some practice.