Badgers Are Downcast After Losing To M 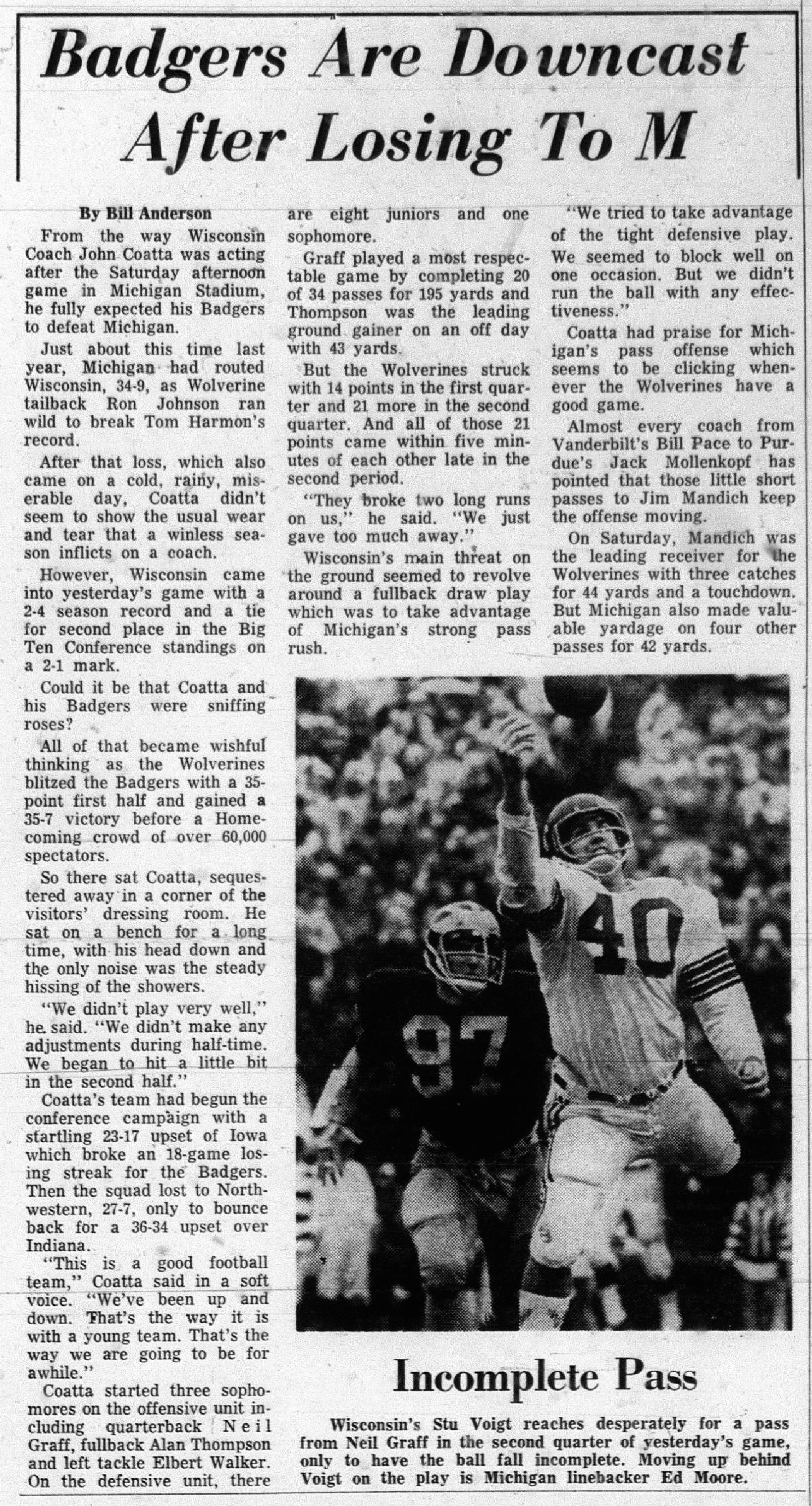 BADGERS ARE DOWNCAST AFTER LOSING TO M

From the way Wisconsin Coach John Coatta was acting after the Saturday afternoon game in Michigan Stadium, he fully expected his Badgers to defeat Michigan.

After that loss, which also came on a cold, rainy, miserable day, Coatta didn’t seem to show the usual wear and tear that a winless season inflicts on a coach.

However, Wisconsin came into yesterday’s game with a 2-4 season record and a tie for second place in the Big Ten Conference standings on a 2-1 mark.

Could it be that Coatta and his Badgers were sniffing roses?

All of that became wishful thinking as the Wolverines blitzed the Badgers with a 35-point first half and gained a 35-7 victory before a Homecoming crowd of over 60,000 spectators.

So there sat Coatta, sequestered away in a corner of the visitors’ dressing room. He sat on the bench for a long time, with his head down and the only noise was the steady hissing of the showers.

“We didn’t play very well,” he said. “We didn’t make any adjustments during half-time. We began to hit a little bit in the second half.”

Coatta’s team had begun the conference campaign with a startling 23-17 upset of Iowa which broke an 18-game losing streak for the Badgers. Then the squad lost to Northwestern, 27-7, only to bounce back for a 36-34 upset over Indiana.

“This is a good football team,” Coatta said in a soft voice. “We’ve been up and down. That’s the way it is with a young team. That’s the way we are going to be for awhile.”

Coatta started three sophomores on the offensive unit including quarterback Neil Graff, fullback Alan Thompson and left tackle Elbert Walker. On the defensive unit, there are eight juniors and one sophomore.

Graff played a most respectable game by completing 20 of 34 passes for 195 yards and Thompson was the leading ground gainer on an off day with 43 yards.

But the Wolverines struck with 14 points in the first quarter and 21 more in the second quarter. All of those 21 points came within five minutes of each other late in the second period.

“They broke two long runs on us,” he said. “We just gave too much away.”

Wisconsin’s main threat on the ground seemed to revolve around a fullback draw play which was to take advantage of Michigan’s strong pass rush.

“We tried to take advantage of the tight defensive play. We seemed to block well on one occasion. But we didn’t run the ball with any effectiveness.”

Coatta had praise for Michigan’s pass offense which seems to be clicking whenever the Wolverines have a good game.

Almost every coach from Vanderbilt’s Bill Pace to Purdue’s Jack Mollenkopf has pointed that those little short passes to Jim Mandich keep the offense moving.

On Saturday, Mandich was the leading receiver for the Wolverines with three catches for 44 yards and a touchdown. But Michigan also made valuable yardage on four other passes for 42 yards.

PHOTO CAPTION: Incomplete Pass: Wisconsin’s Stu Voigt reaches desperately for a pass from Neil Graff in the second quarter of yesterday’s game, only to have the ball fall incomplete. Moving up behind Voigt on the play is Michigan linebacker Ed Moore.