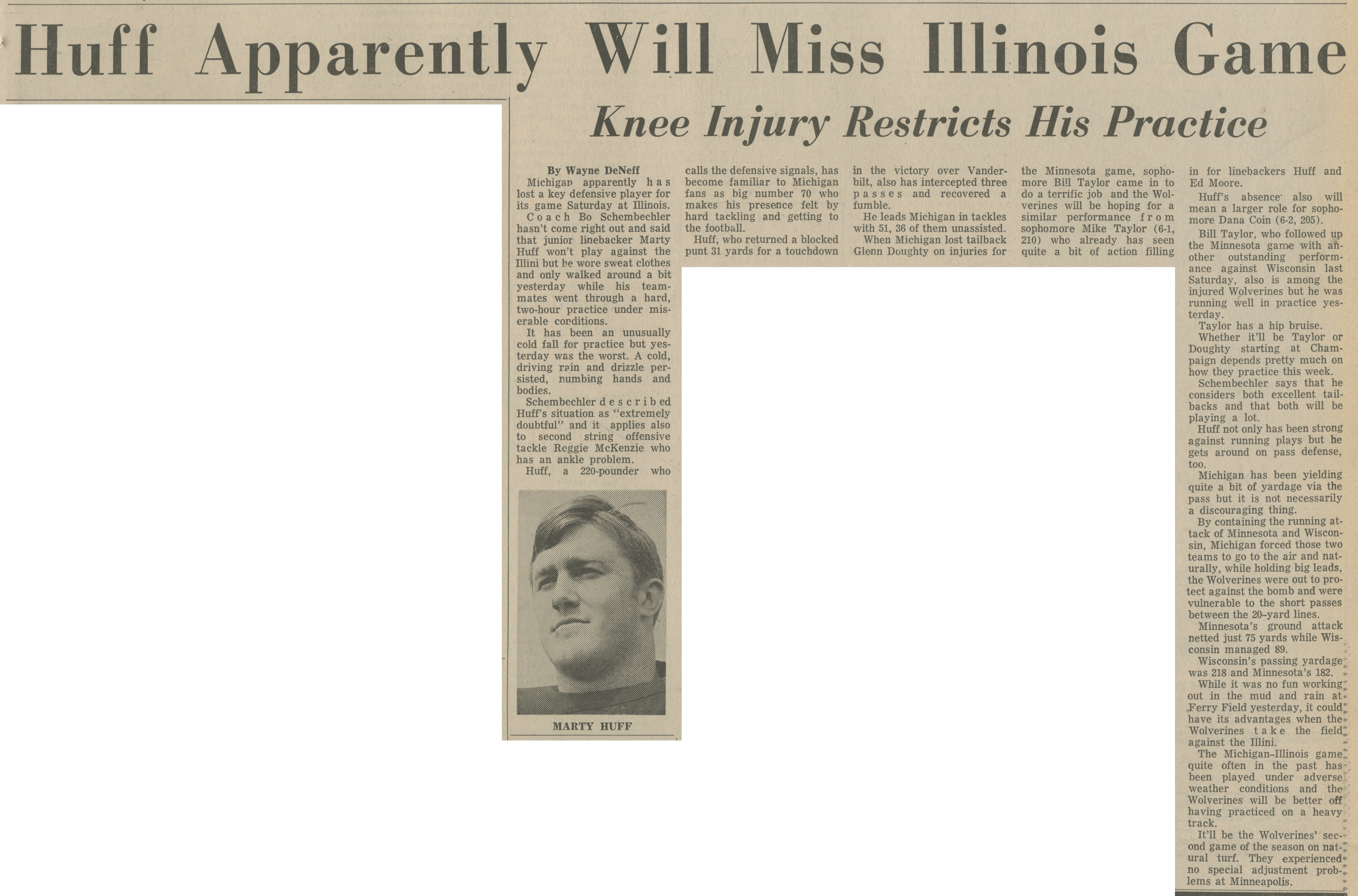 Michigan apparently has lost a key defensive player for its game Saturday at Illinois.

Coach Bo Schembechler hasn’t come right out and said that junior linebacker Marty Huff won’t play against the Illini but he wore sweat clothes and only walked around a bit yesterday while his teammates went through a hard, two-hour practice under miserable conditions.

It has been an unusually cold fall for practice but yesterday was the worst. A cold, driving rain and drizzle persisted, numbing hands and bodies.

Schembechler described Huff’s situation as “extremely doubtful” and it applies also to second string offensive tackle Reggie McKenzie who has an ankle problem.

Huff, a 220-pounder who calls the defensive signals, has become familiar to Michigan fans as big number 70 who makes his presence felt by hard tackling and getting to the football.

Huff, who returned a blocked punt 31 yards for a touchdown in the victory over Vanderbilt, also has intercepted three passes and recovered a fumble.

He leads Michigan in tackles with 51, 36 of them unassisted.

When Michigan lost tailback Glenn Doughty on injuries for the Minnesota game, sophomore Bill Taylor came in to do a terrific job and the Wolverines will be hoping for a similar performance from sophomore Mike Taylor (6-1, 210) who already has seen quite a bit of action filling in for linebackers Huff and Ed Moore.

Bill Taylor, who followed up the Minnesota game with another outstanding performance against Wisconsin last Saturday, also is among the injured Wolverines but he was running well in practice yesterday.

Taylor has a hip bruise.

Whether it’ll be Taylor or Doughty starting at Champaign depends pretty much on how they practice this week.

Schembechler says that he considers both excellent tailbacks and that both will be playing a lot.

Huff not only has been strong against running plays but he gets around on pass defense, too.

Michigan has been yielding quite a bit of yardage via the pass but it is not necessarily a discouraging thing.

By containing the running attack of Minnesota and Wisconsin, Michigan forced those two teams to go to the air and naturally, while holding big leads, the Wolverines were out to protect against the bomb and were vulnerable to the short passes between the 20-yard lines.

Wisconsin’s passing yardage was 218 and Minnesota’s 182.

While it was no fun working out in the mud and rain at Ferry Field yesterday, it could have its advantages when the Wolverines take the field against the Illini.

The Michigan-Illinois game quite often in the past has been played under adverse weather conditions and the Wolverines will be better off having practiced on a heavy track.

It’ll be the Wolverines’ second game of the season on natural turf. They experienced no special adjustment problems at Minneapolis.