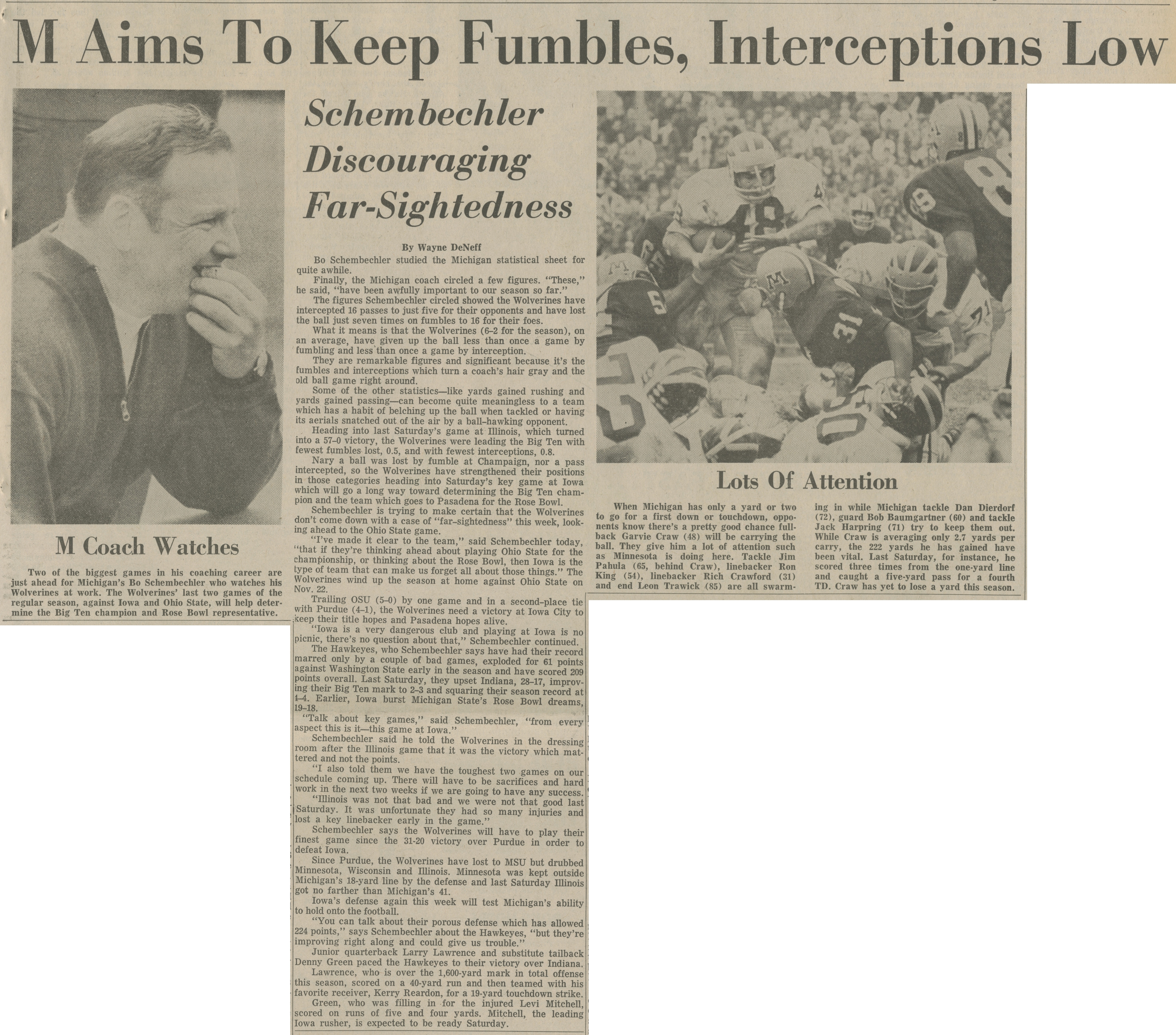 Bo Schembechler studied the Michigan statistical sheet for quite awhile.

Finally, the Michigan coach circled a few figures. “These,” he said, “have been awfully important to our season so far.”

The figures Schembechler circled showed the Wolverines have intercepted 16 passes to just five for their opponents and have lost the ball just seven times on fumbles to 16 for their foes.

They are remarkable figures and significant because it’s the fumbles and interceptions which turn a coach’s hair gray and the old ball game right around.

Some of the other statistics—like yards gained rushing and yards gained passing—can become quite meaningless to a team which has a habit of belching up the ball when tackled or having its aerials snatched out of the air by a ball-hawking opponent.

Heading into last Saturday’s game at Illinois, which turned into a 57-0 victory, the Wolverines were leading the Big Ten with fewest fumbles lost, 0.5, and with fewest interceptions, 0.8.

Nary a ball was lost by fumble at Champaign, nor a pass intercepted, so the Wolverines have strengthened their positions in those categories heading into Saturday’s key game at Iowa which will go a long way toward determining the Big Ten champion and the team which goes to Pasadena for the Rose Bowl.

Schembechler is trying to make certain that the Wolverines don’t come down with a case of “far-sightedness” this week, looking ahead to the Ohio State game.

“I’ve made it clear to the team,” said Schembechler today, “that if they’re thinking ahead about playing Ohio State for the championship, or thinking about the Rose Bowl, then Iowa is the type of team that can make us forget all about those things.” The Wolverines wind up the season at home against Ohio State on Nov. 22.

Trailing OSU (5-0) by one game and in a second-place tie with Purdue (4-1), the Wolverines need a victory at Iowa City to keep their title hopes and Pasadena hopes alive.

“Iowa is a very dangerous club and playing at Iowa is no picnic, there’s no question about that,” Schembechler continued.

The Hawkeyes, who Schembechler says have had their record marred only by a couple of bad games, exploded for 61 points against Washington State early in the season and have scored 209 points overall. Last Saturday, they upset Indiana,, 28-17, improving their Big Ten mark to 2-3 and squaring their season record at 4-4. Earlier, Iowa burst Michigan State’s Rose Bowl dreams, 19-18.

“Talk about key games,” said Schembechler, “from every aspect this is it—this game at Iowa.”

Schembechler said he told the Wolverines in the dressing room after the Illinois game that it was the victory which mattered and not the points.

“I also told them we have the toughest two games on our schedule coming up. There will have to be sacrifices and hard work in the next two weeks if we are going to have any success.

“Illinois was not that bad and we were not that good last Saturday. It was unfortunate they had so many injuries and lost a key linebacker early in the game.”

Schembechler says the Wolverines will have to play their finest game since the 31-20 victory over Purdue in order to defeat Iowa.

Since Purdue, the Wolverines have lost to MSU but drubbed Minnesota, Wisconsin and Illinois. Minnesota was kept outside Michigan’s 18-yard line by the defense and last Saturday Illinois got no farther than Michigan’s 41.

Iowa’s defense again this week will test Michigan’s ability to hold onto the football.

“You can talk about their porous defense which has allowed 224 points,” says Schembechler about the Hawkeyes, “but they’re improving right along and could give us trouble.”

Lawrence, who is over the 1,600-yard mark in total offense this season, scored on a 40-yard run and then teamed with his favorite receiver, Kerry Reardon, for a 19-yard touchdown strike.

Green, who was filling in for the injured Levi Mitchell, scored on runs of five and four yards. Mitchell, the leading Iowa rusher, is expected to be ready Saturday.