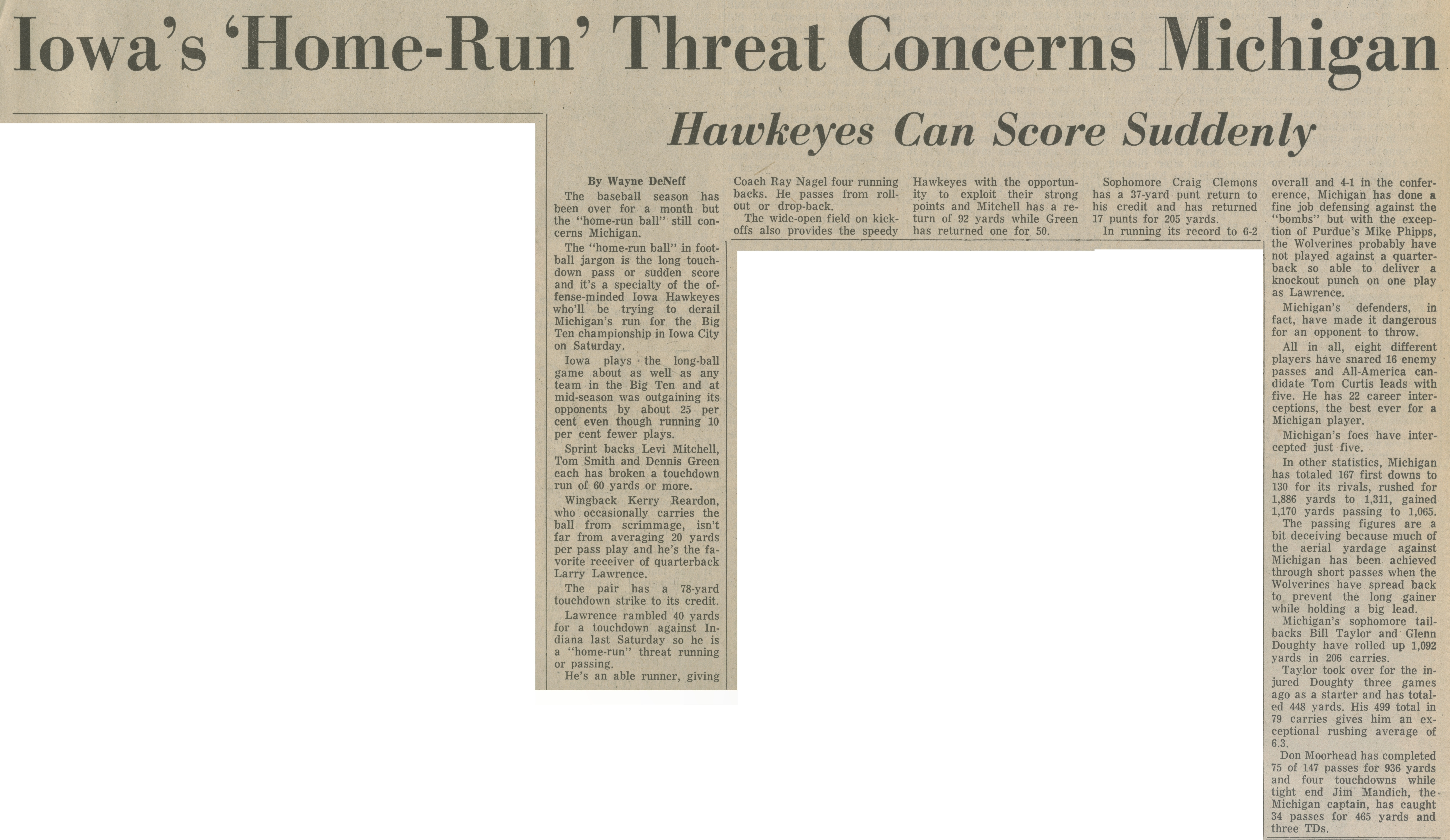 The baseball season has been over for a month but the “home-run ball” still concerns Michigan.

The “home-run ball” in football jargon is the long touchdown pass or sudden score and it’s a specialty of the offense-minded Iowa Hawkeyes who’ll be trying to derail Michigan’s run for the Big Ten championship in Iowa City on Saturday.

Iowa plays the long-ball game about as well as any team in the Big Ten and at mid-season was outgaining its opponents by about 25 per cent even though running 10 per cent fewer plays.

Sprint backs Levi Mitchell, Tom Smith and Dennis Green each has broken a touchdown run of 60 yards or more.

The pair has a 78-yard touchdown strike to its credit.

Lawrence rambled 40 yards for a touchdown against Indiana last Saturday so he is a “home-run” threat running or passing.

The wide-open field on kickoffs also provides the speedy Hawkeyes with the opportunity to exploit their strong points and Mitchell has a return of 92 yards while Green has returned one for 50.

Sophomore Craig Clemons has a 37-yard punt return to his credit and has returned 17 punts for 205 yards.

In running its record to 6-2 overall and 4-1 in the conference, Michigan has done a fine job defensing against the “bombs” but with the exception of Purdue’s Mike Phipps, the Wolverines probably have not played against a quarterback so able to deliver a knockout punch on one play as Lawrence.

Michigan’s defenders, in fact, have made it dangerous for an opponent to throw.

All in all, eight different players have snared 16 enemy passes and All-America candidate Tom Curtis leads with five. He has 22 career interceptions, the best ever for a Michigan player.

The passing figures are a bit deceiving because much of the aerial yardage against Michigan has been achieved through short passes when the Wolverines have spread back to prevent the long gainer while holding a big lead.

Taylor took over for the injured Doughty three games ago as a starter and has totaled 448 yards. His 499 total in 79 carries gives him an exceptional rushing average of 6.3.

Don Moorhead has completed 75 of 147 passes for 936 yards and four touchdowns while tight end Jim Mandich, the Michigan captain, has caught 34 passes for 465 yards and three TDs.