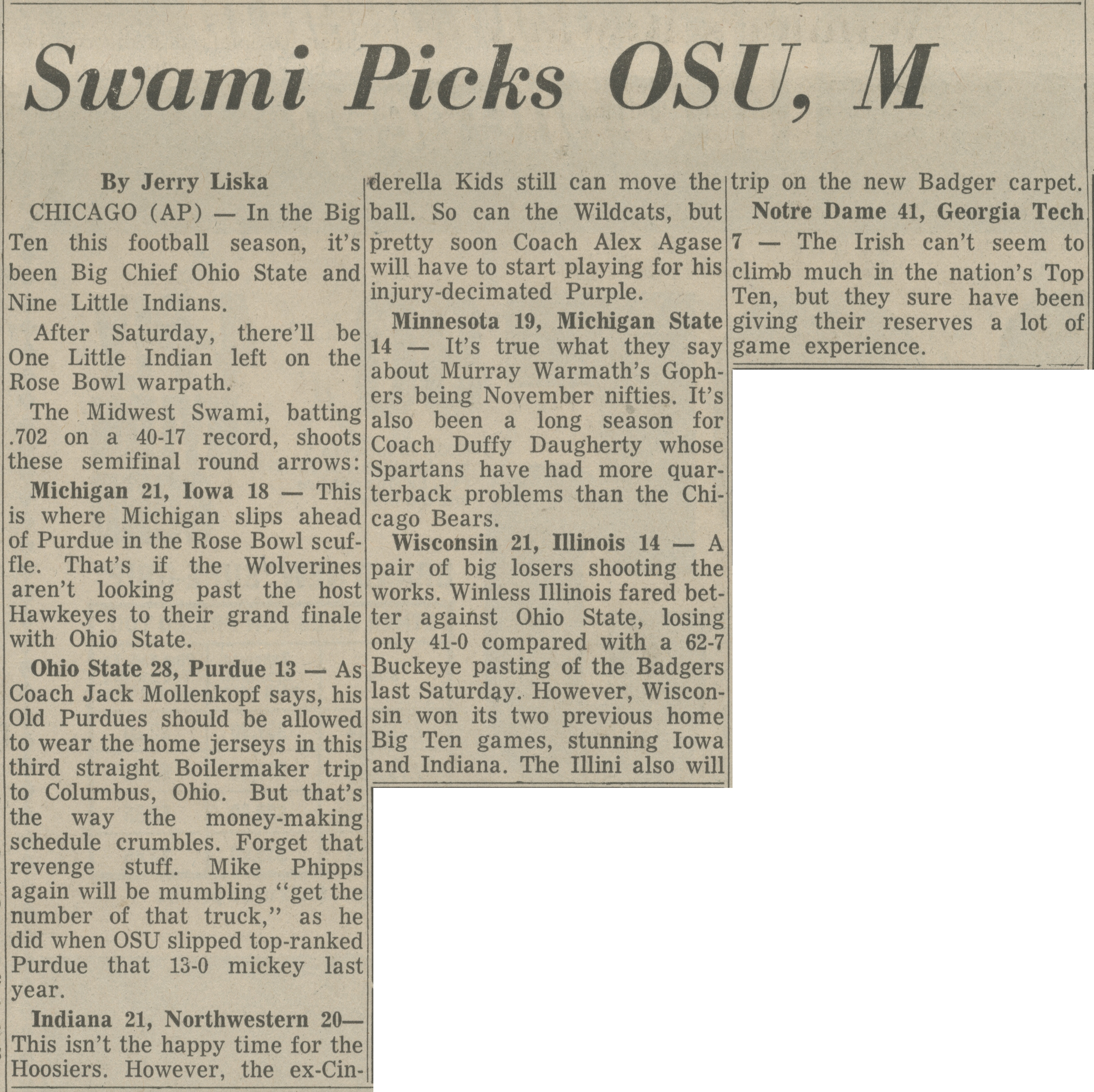 CHICAGO (AP)—In the Big Ten this football season, it’s been Big Chief Ohio State and Nine Little Indians.
After Saturday, there’ll be One Little Indian left on the Rose Bowl warpath.
The Midwest Swami, batting .702 on a 40-17 record, shoots these semifinal round arrows:
Michigan 21, Iowa 18—This is where Michigan slips ahead of Purdue in the Rose Bowl scuffle. That’s if the Wolverines aren’t looking past the host Hawkeyes to their grand finale with Ohio State.
Ohio State 28, Purdue 13—As Coach Jack Mollenkopf says, his Old Purdues should be allowed to wear the home jerseys in this third straight Boilermaker trip to Columbus, Ohio. But that’s the way the money-making schedule crumbles. Forget that revenge stuff. Mike Phipps again will be mumbling “get the number of that truck” as he did when OSU slipped top-ranked Purdue that 13-0 mickey last year.
Indiana 21, Northwestern 20—This isn’t the happy time for the Hoosiers. However, the ex-Cinderella Kids still can move the ball. So can the Wildcats, but pretty soon Coach Alex Agase will have to start playing for his injury-decimated Purple.
Minnesota 19, Michigan State 14—It’s true what they say about Murray Warmath’s Gophers being November nifties. It’s also been a long season for Coach Duffy Daugherty whose Spartans have had more quarterback problems than the Chicago Bears.
Wisconsin 21, Illinois 14—A pair of big losers shooting the works. Winless Illinois fared better against Ohio State, losing only 41-0 compared with a 62-7 Buckeye pasting of the Badgers last Saturday. However, Wisconsin won its two previous home Big Ten games, stunning Iowa and Indiana. The Illini also will trip on the new Badger carpet.
Notre Dame 41, Georgia Tech 7—The Irish can’t seem to climb much in the nation’s Top Ten, but they sure have been giving their reserves a lot of game experience.