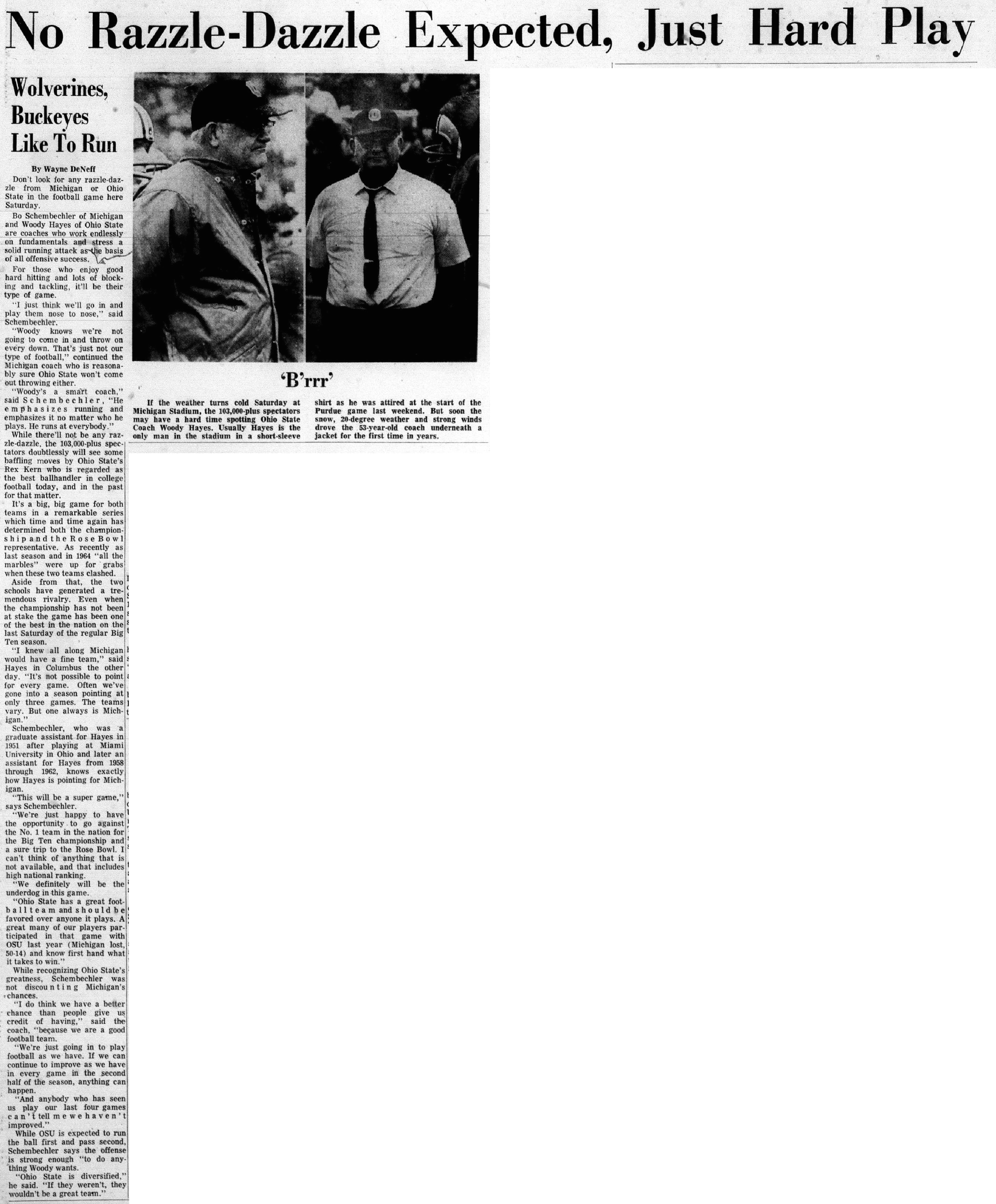 Don’t look for any razzle-dazzle from Michigan or Ohio State in the football game here Saturday.

Bo Schembechler of Michigan and Woody Hayes of Ohio State are coaches who work endlessly on fundamentals and stress a solid running attack as the basis of all offensive success.

For those who enjoy good hard hitting and lots of blocking and tackling, it’ll be their type of game.

“I just think we’ll go in and play them nose to nose,” said Schembechler.

“Woody knows we’re not going to come in and throw on every down. That’s just not our type of football,” continued the Michigan coach who is reasonably sure Ohio State won’t come out throwing either.

“Woody’s a smart coach,” said Schembechler. “He emphasizes running and emphasizes it no matter who he plays. He runs at everybody.”

While there’ll not be any razzle-dazzle, the 103,000-plus spectators doubtlessly will see some baffling moves by Ohio State’s Rex Kern who is regarded as the best ballhandler in college football today, and in the past for that matter.

It’s a big, big game for both teams in a remarkable series which time and time again has determined both the championship and the Rose Bowl representative. As recently as last season and in 1964 “all the marbles” were up for grabs when these two teams clashed.

Aside from that, the two schools have generated a tremendous rivalry. Even when the championship has not been at stake the game has been one of the best in the nation on the last Saturday of the regular Big Ten season.

“I knew all along Michigan would have a fine team,” said Hayes in Columbus the other day. “It’s not possible to point for every game. Often we’ve gone into a season pointing at only three games. The teams vary. But one always is Michigan.”

“This will be a super game,” says Schembechler.

“We’re just happy to have the opportunity to go against the No. 1 team in the nation for the Big Ten championship and a sure trip to the Rose Bowl. I can’t think of anything that is not available, and that includes high national ranking.

“We definitely will be the underdog in this game.

“Ohio State has a great football team and should be favored over anyone it plays. A great many of our players participated in that game with OSU last year (Michigan lost, 50-14) and know first hand what it takes to win.”

“I do think we have a better chance than people give us credit of having,” said the coach, “because we are a good football team.

“We’re just going in to play football as we have. If we can continue to improve as we have in every game in the second half of the season, anything can happen.

“And anybody who has seen us play our last four games can’t tell me we haven’t improved.”

While OSU is expected to run the ball first and pass second, Schembechler says the offense is strong enough “to do anything Woody wants.

“Ohio State is diversified,” he said. “If they weren’t, they wouldn’t be a great team.”

PHOTO CAPTION: ‘B’rrr’: If the weather turns cold Saturday at Michigan Stadium, the 103,000-plus spectators may have a hard time spotting Ohio State Coach Woody Hayes. Usually Hayes is the only man in the stadium in a short-sleeve shirt as he was attired at the start of the Purdue game last weekend. But soon the snow, 20-degree weather and strong winds drove the 53-year-old coach underneath a jacket for the first time in years.