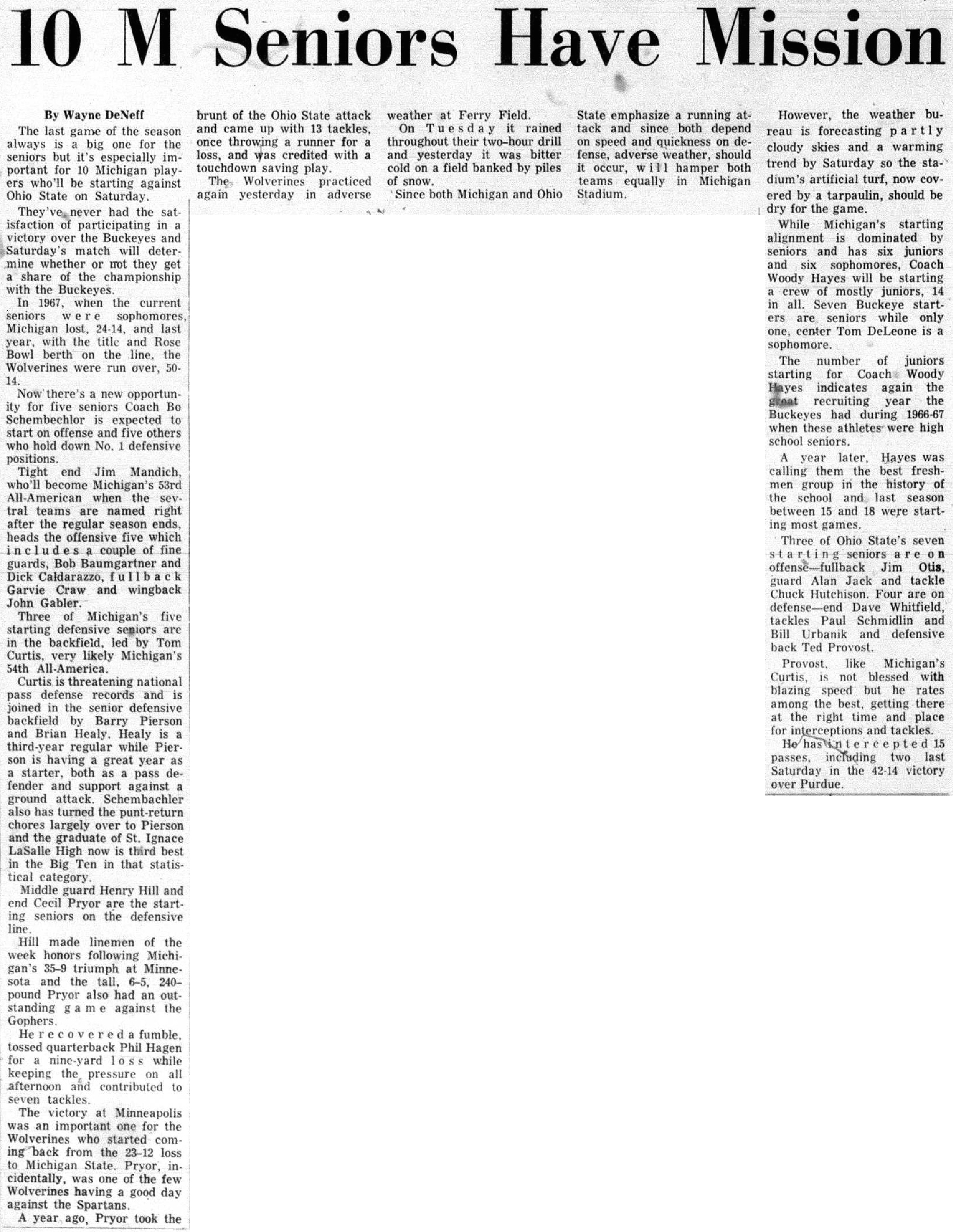 The last game of the season always is a big one for the seniors but it’s especially important for 10 Michigan players who’ll be starting against Ohio State on Saturday.

They’ve never had the satisfaction of participating in a victory over the Buckeyes and Saturday’s match will determine whether or not they get a share of the championship with the Buckeyes.

In 1967, when the current seniors were sophomores, Michigan lost, 24-14, and last year, with the title and Rose Bowl berth on the line, the Wolverines were run over, 50-14.

Now there’s a new opportunity for five seniors Coach Bo Schembechler is expectedto start on offense and five others who will hold down No. 1 defensive positions.

Curtis is threatening national pass defense records and is joined in the senior defensive backfield by Barry Pierson and Brian Healy. Healy is a third-year regular while Pierson is having a great year as a starter, both as a pass defender and support against a ground attack. Schembechler also has turned the punt-return chores largely over to Pierson and the graduate of St. Ignace LaSalle High now is third best in the Big Ten in that statistical category.

Middle guard Henry Hill and end Cecil Pryor are the starting seniors on the defensive line.

Hill made linemen of the week honors following Michigan’s 35-9 triumph at Minnesota and the tall, 6-5, 240-pound Pryor also had an outstanding game against the Gophers.

He recovered a fumble, tossed quarterback Phil Hagen for a nine-yard loss while keeping the pressure on all afternoon and contributed to seven tackles.

The victory at Minneapolis was an important one for the Wolverines who started coming back from the 23-12 loss to Michigan State. Pryor, incidentally, was one of the few Wolverines having a good day against the Spartans.

A year ago, Pryor took the brunt of the Ohio State attack and came up with 13 tackles, once throwing a runner for a loss, and was credited with a touchdown saving play.

On Tuesday it rained throughout their two-hour drill and yesterday it was bitter cold on a field banked by piles of snow.

Since both Michigan and Ohio State emphasize a running attack and since both depend on speed and quickness on defense, adverse weather, should it occur, will hamper both teams equally in Michigan Stadium.

However, the weather bureau is forecasting partly cloudy skies and a warming trend by Saturday so the stadium’s artificial turf, now covered by a tarpaulin, should be dry for the game.

While Michigan’s starting alignment is dominated by seniors and has six juniors and six sophomores, Coach Woody Hayes will be starting a crew of mostly juniors, 14 in all. Seven Buckeye starters are seniors while only one, center Tom DeLeone is a sophomore.

The number of juniors starting for Coach Woody Hayes indicates again the great recruiting year the Buckeyes had during 1966-67 when these athletes were high school seniors.

A year later, Hayes was calling them the best freshmen group in the history of the school and last season between 15 and 18 were starting most games.

Provost, like Michigan’s Curtis, is not blessed with blazing speed but he rates among the best, getting there at the right time and place for interceptions and tackles.

He has intercepted 15 passes, including two last Saturday in the 42-14 victory over Purdue.