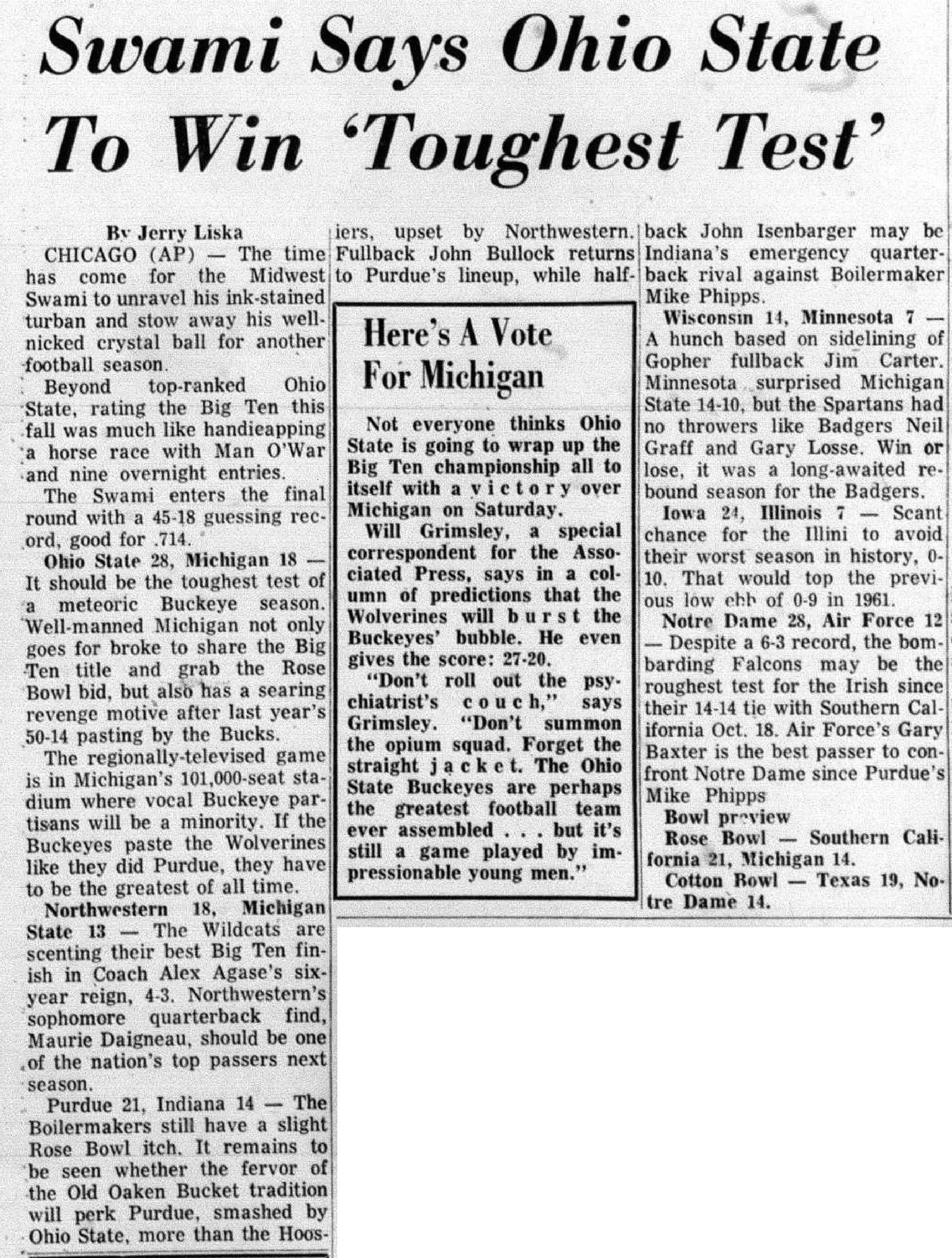 CHICAGO (AP)—The time has come for the Midwest Swami to unravel his ink-stained turban and stow away his well-nicked crystal ball for another football season.

Beyond top-ranked Ohio State, rating the Big Ten this fall was much like handicapping a horse race with Man O’War and nine overnight entries.

Ohio State 28, Michigan 18—It should be the toughest test of a meteoric Buckeye season. Well-manned Michigan not only goes for broke to share the Big Ten title and grab the Rose Bowl bid, but also has a searing revenge motive after last year’s 50-14 pasting by the Bucks.

The regionally-televised game is in Michigan’s 101,000-seat stadium where vocal Buckeye partisans will be a minority. If the Buckeyes paste the Wolverines like they did Purdue, they have to be the greatest of all time.

Purdue 21, Indiana 14—The Boilermakers still have a slight Rose Bowl itch. It remains to be seen whether the fervor of the Old Oaken Bucket tradition will perk Purdue, smashed by Ohio State, more than the Hoosiers, upset by Northwestern. Fullback John Bullock returns to Purdue’s lineup, while halfback John Isenbarger may be Indiana’s emergency quarterback rival against Boilermaker Mike Phipps.

Wisconsin 14, Minnesota 7—A hunch based on sidelining of Gopher fullback Jim Carter. Minnesota surprised Michigan State 14-10, but the Spartans had no throwers like Badgers Neil Graff and Gary Losse. Win or lose, it was a long-awaited rebound season for the Badgers.

Notre Dame 28, Air Force 12—Despite a 6-3 record, the bombarding Falcons may be the roughest test for the Irish since their 14-14 tie with Southern California Oct. 18. Air Force’s Gary Baxter is the best passer to confront Notre Dame since Purdue’s Mike Phipps.