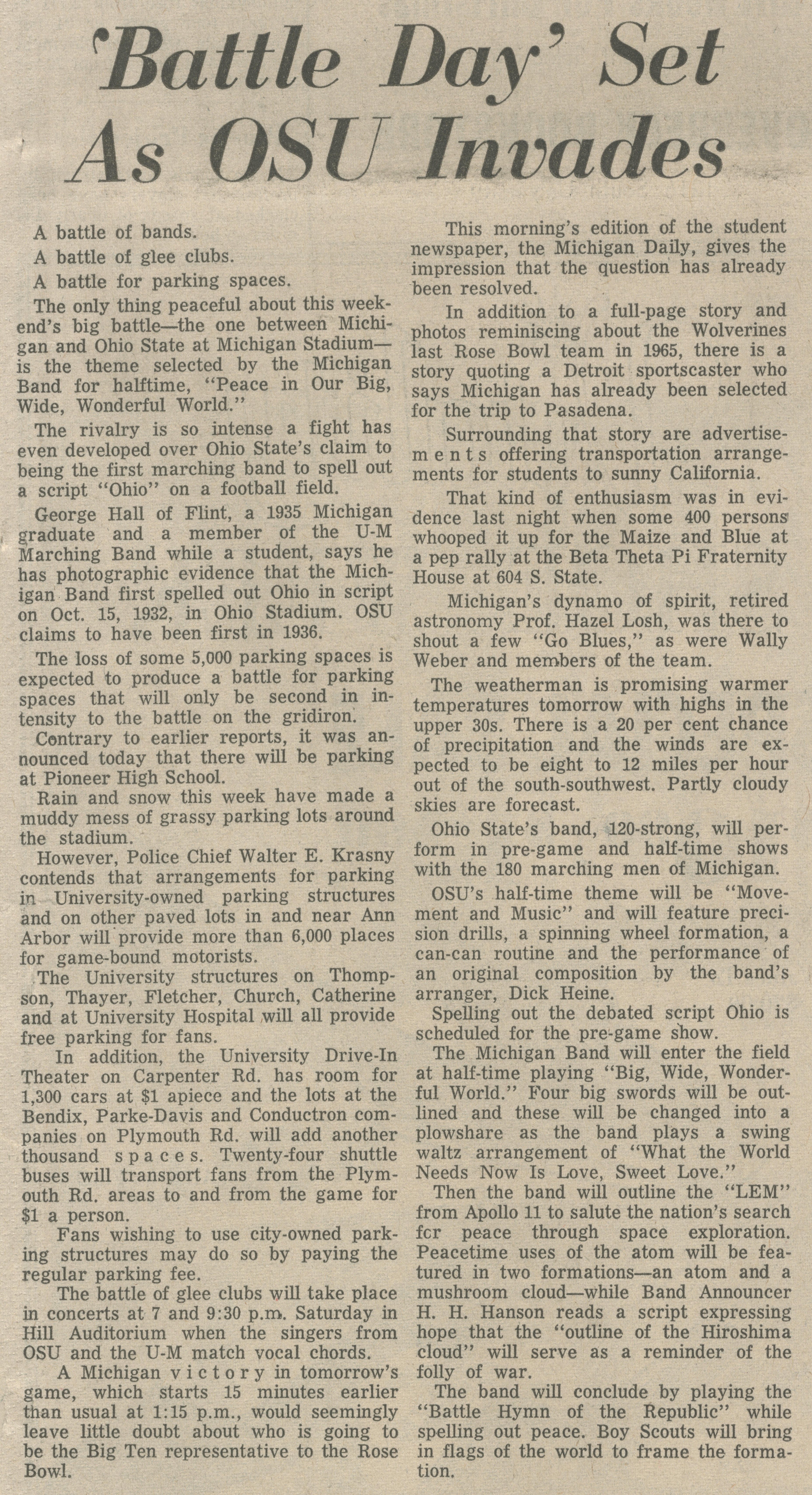 A battle of bands.

A battle of glee clubs.

A battle for parking spaces.

The only thing peaceful about this weekend’s big battle—the one between Michigan and Ohio State at Michigan Stadium—is the theme selected by the Michigan Band for halftime, “Peace in Our Big, Wide, Wonderful World.”

The rivalry is so intense a fight has even developed over Ohio State’s claim to being the first marching band to spell out a script “Ohio” on a football field.

George Hall of Flint, a 1935 Michigan graduate and a member of the U-M Marching Band while a student, says he has photographic evidence that the Michigan Band first spelled out Ohio in script on Oct. 15, 1932, in Ohio Stadium. OSU claims to have been the first in 1936.

The loss of some 5,000 parking spaces is expected to produce a battle for parking spaces that will only be second in intensity to the battle on the gridiron.

Contrary to earlier reports, it was announced today that there will be parking at Pioneer High School.

Rain and snow this week have made a muddy mess of grassy parking lots around the stadium.

However, Police Chief Walter E. Krasny contends that arrangements for parking in University-owned parking structures and on other paved lots in and near Ann Arbor will provide more than 6,000 places for game-bound motorists.

The University structures on Thompson, Thayer, Fletcher, Church, Catherine and at University Hospital will all provide free parking for fans.

In addition, the University Drive-In Theater on Carpenter Rd. has room for 1,300 cars at $1 apiece and the lots at the Bendix, Parke-Davis and Conductron companies on Plymouth Rd. will add another thousand spaces. Twenty-four shuttle buses will transport fans from the Plymouth Rd. areas to and from the game for $1 a person.

Fans wishing to use city-owned parking structures may do so by paying the regular parking fee.

The battle of glee clubs will take place on concerts at 7 and 9:30 p.m. Saturday in Hill Auditorium when the singers from OSU and the U-M match vocal chords.

A Michigan victory in tomorrow’s game, which starts 15 minutes earlier than usual at 1:15 p.m., would seemingly leave little doubt about who is going to be the Big Ten representative to the Rose Bowl.

This morning’s edition of the student newspaper, the Michigan Daily, gives the impression that the question has already been resolved.

In addition to a full-page story and photos reminiscing about the Wolverines last Rose Bowl team in 1965, there is a story quoting a Detroit sportscaster who says Michigan has already been selected for the trip to Pasadena.

Surrounding that story are advertisements offering transportation arrangements for students to sunny California.

That kind of enthusiasm was in evidence last night when some 400 persons whooped it up for the Maize and Blue at a pep rally at the Beta Theta Pi Fraternity House at 604 S. State.

Michigan’s dynamo of spirit, retired astronomy Prof. Hazel Losh, was there to shout a few “Go Blues,” as were Wally Weber and members of the team.

The weatherman is promising warmer temperatures tomorrow with highs in the upper 30s. There is a 20 per cent chance of precipitation and the winds are expected to be eight to 12 miles per hour out of the south-southwest. Partly cloudy skies are the forecast.

Ohio State’s band, 120-strong, will perform in pre-game and half-time shows with the 180 marching men of Michigan.

OSU’s half-time theme will be “Movement and Music” and will feature precision drills, a spinning wheel formation, a can-can routine and the performance of an original composition by the band’s arranger, Dick Heine.

Spelling out the debated script Ohio is scheduled for the pre-game show.

The Michigan Band will enter the field at half-time playing “Big, Wide, Wonderful World.” Four big swords will be outlined and these will be changed into a plowshare as the band plays a swing-waltz arrangement of “What the World Needs Now Is Love, Sweet Love.”

Then the band will outline the “LEM” from Apollo 11 to salute the nation’s search for peace through space exploration. Peacetime uses of the atom will be featured in two formation—an atom and a mushroom cloud—while Band Announcer H. H. Hanson reads a script expressing hope that the “outline of the Hiroshima cloud” will serve as a reminder of the folly of war.

The band will conclude by playing the “Battle Hymn of the Republic” while spelling out peace. Boy Scouts will bring in flags of the world to frame the formation.