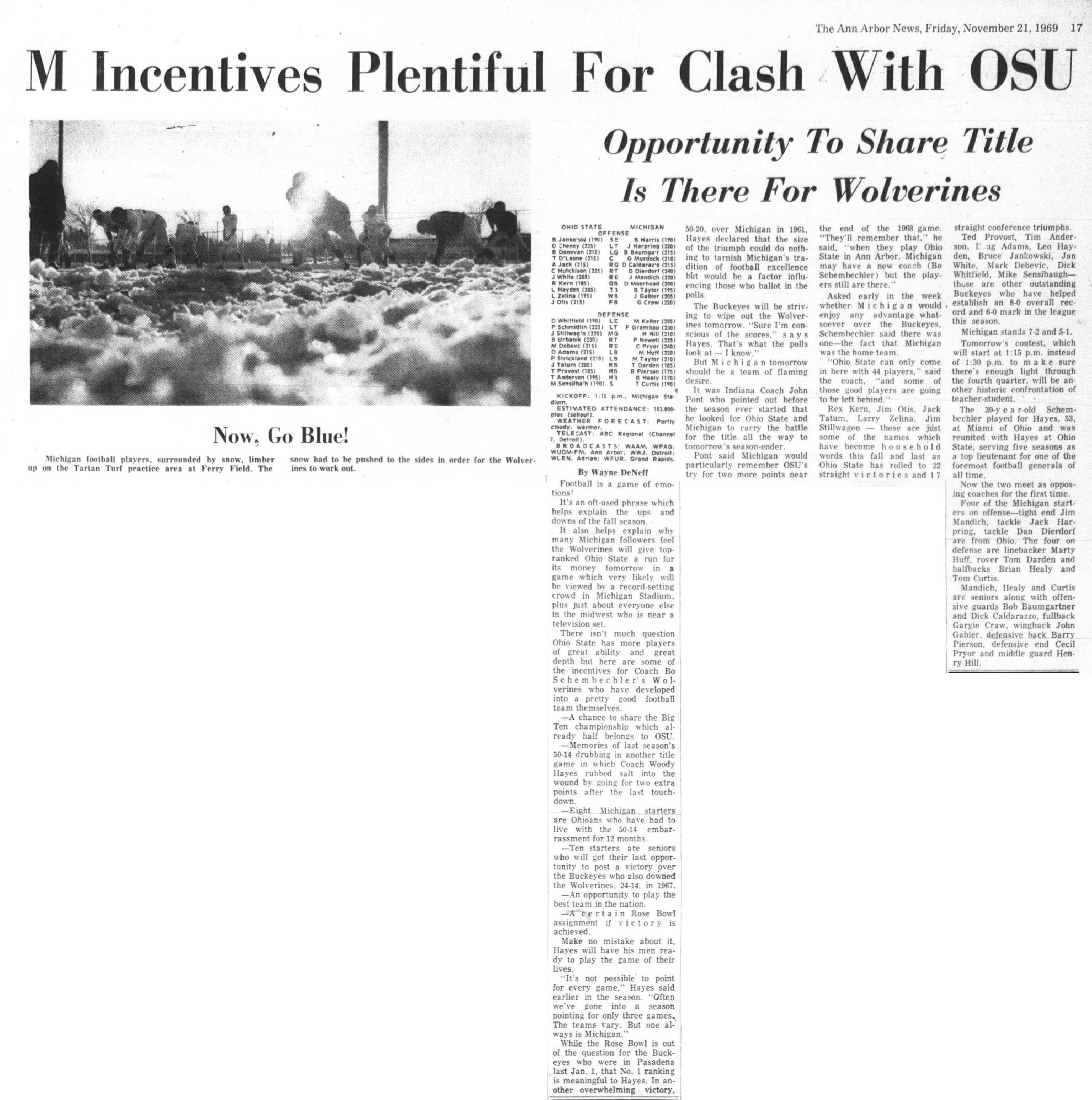 Football is a game of emotions!

It’s an oft-used phrase which helps explain the ups and downs of the fall season.

It also helps explain why many Michigan followers feel the Wolverines will give top-ranked Ohio State a run for its money tomorrow in a game which very likely will be viewed by a record-setting crowd in Michigan Stadium, plus just about everyone else in the Midwest who is near a television set.

There isn’t much question Ohio State has more players of great ability and great depth but here are some of the incentives for Coach Bo Schembechler’s Wolverines who have developed into a pretty good football team themselves.

-A chance to share the Big Ten championship which already half belongs to OSU.

-Memories of last season’s 50-14 drubbing in another title game in which Coach Woody Hayes rubbed salt into the wound by going for two extra points after the last touchdown.

-Eight Michigan starters are Ohioans who have had to live with the 50-14 embarrassment for 12 months.

-Ten starters are seniors who will get their last opportunity to post a victory over the Buckeyes who also downed the Wolverines, 24-14, in 1967.

-An opportunity to play the best team in the nation.

-A certain Rose Bowl assignment if victory is achieved.

Make no mistake about it, Hayes will have his men ready to play the game of their lives.

“It’s not possible to point for every game,” Hayes said earlier in the season. “Often we’ve gone into a season pointing for only thee games. The teams vary. But one always is Michigan.”

While the Rose Bowl is out of the question for the Buckeyes who were in Pasadena last Jan. 1, that No. 1 ranking is meaningful to Hayes. In another overwhelming victory, 50-20, over Michigan in 1961, Hayes declared that the size of the triumph could do nothing to tarnish Michigan’s tradition of football excellence but would be a factor influencing those who ballot in the polls.

The Buckeyes will be striving to wipe out the Wolverines tomorrow. “Sure I’m conscious of the scores,” says Hayes. “That’s what the polls look at—I know.”

But Michigan tomorrow should be a team of flaming desire.

It was Indiana Coach John Pont who pointed out before the season ever started that he looked for Ohio State and Michigan to carry the battle for the title all the way to tomorrow’s season-ender.

Pont said Michigan would particularly remember OSU’s try for two more points near the end of the 1968 game. “They’ll remember that,” he said, “when they play Ohio State in Ann Arbor. Michigan may have a new coach (Bo Schembechler) but the players still are there.”

Asked early in the week whether Michigan would enjoy any advantage whatsoever over the Buckeyes, Schembechler said there was one—the fact that Michigan was the home team.

“Ohio State can only come in here with 44 palyers,” said the coach, “and some of those good players are going to be left behind.”

Rex Kern, Jim Otis, Jack Tatum, Larry Zelina, Jim Stillwagon—those are just some of the names which have become household words this fall and last as Ohio State has rolled to 22 straight victories and 17 straight conference triumphs.

Tomorrow’s contest, which will start at 1:15 p.m. instead of 1:30 p.m. to make sure there’s enough light through the fourth quarter, will be another historic confrontation of teacher-student.

The 39-year-old Schembechler played for Hayes, 53, at Miami of Ohio and was reunited with Hayes at Ohio State, serving five seasons as a top lieutenant for one of the foremost football generals of all time.

Now the two meet as opposing coaches for the first time.

PHOTO CAPTION: Now, Go Blue!: Michigan football players, surrounded by snow, limber up on the Tartan Turf practice area at Ferry Field. The snow had to be pushed to the sides in order for the Wolverines to work out.