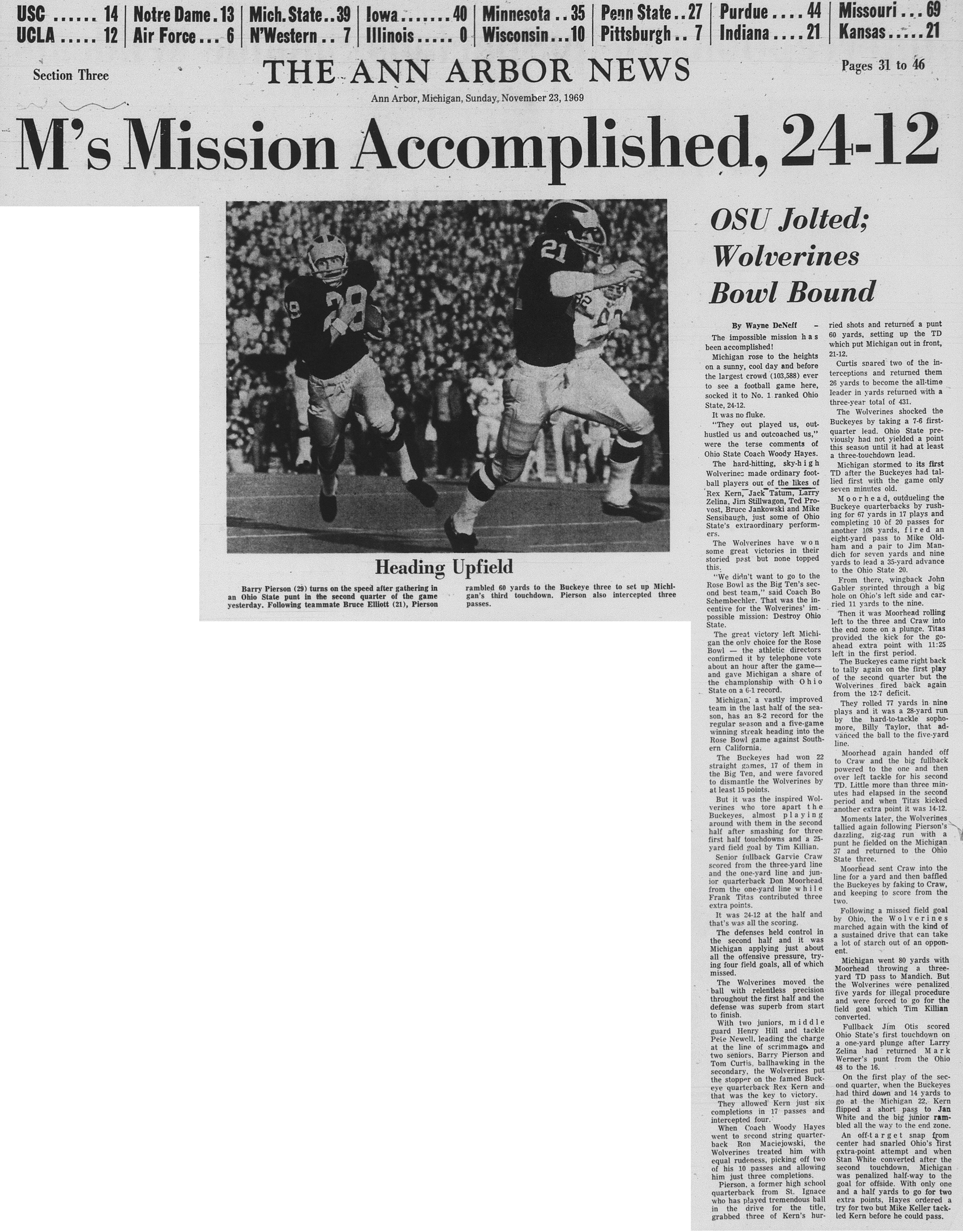 The impossible mission has been accomplished!

It was no fluke.

“They out played us, out-hustled us and outcoached us,” were the terse comments of Ohio State Coach Woody Hayes.

The Wolverines have won some great victories in their storied past but none topped this.

“We didn’t want to go to the Rose Bowl as the Big Ten’s second best team,” said Coach Schembechler. That was the incentive for the Wolverines’ impossible mission: Destroy Ohio State.

The great victory left Michigan the only choice for the Rose Bowl—the athletic directors confirmed it by telephone vote about an hour after the game—and gave Michigan a share of the championship with Ohio State on a 6-1 record.

Michigan, a vastly improved team in the last half of the season, has an 8-2 record for the regular season and a give-game winning streak heading into the Rose Bowl game against Southern California.

The Buckeyes had won 22 straight games, 17 of them in the Big Ten, and were favored to dismantle the Wolverines by at least 15 points.

But it was the inspired Wolverines who tore apart the Buckeyes, almost playing around with them in the second half after smashing for three first half touchdowns and a 25-yard field goal by Tim Killian.

The defenses held control in the second half and it was Michigan applying just about all the offensive pressure, trying four field goals, all of which missed.

The Wolverines moved the ball with relentless precision throughout the first half and the defense was superb from start to finish.

With two juniors, middle guard Henry Hill and tackle Pete Newell, leading the charge at the line of scrimmage and two seniors, Barry Pierson and Tom Curtis, ballhawking in the secondary, the Wolverines put the stopper on the famed Buckeye quarterback Rex Kern and that was the key to victory.

When Coach Woody Hayes went to second string quarterback Ron Maciejowski, the Wolverines treated him with equal rudeness, picking off two of his 10 passes and allowing him just three completions.

Pierson, a former high school quarterback from St. Ignace who has played tremendous ball in the drive for the title, grabbed three of Kern’s hurried shots and returned a punt 60 yards, setting up the TD which put Michigan out in front, 21-12.

Curtis snared two of the interceptions and returned them 26 yards to become the all-time leader in yards returned with a three-year total of 431.

The Wolverines shocked the Buckeyes by taking a 7-6 first quarter lead. Ohio State previously had not yielded a point this season until it had at least a three-touchdown lead.

Michigan stormed to its first TD after the Buckeyes had tallied first with the game only seven minutes old.

Moorhead, outdueling the Buckeye quarterbacks by rushing for 67 yards in 17 plays and completing 10 of 20 passes for another 108 yards, fired an eight-yard pass to Mike Oldham and a pair to Jim Mandich for seven yards and nine yards to lead a 35-yard advance to the Ohio State 20.

From there, wingback John Gabler sprinted through a big hole on Ohio’s left side and carried 11 yards to the nine.

Then it was Moorhead rolling left to the three and Craw into the end zone on a plunge. Titas provided the kick for the go-ahead extra point with 11:25 left in the first period.

The Buckeyes came right back to tally again on the first play of the second quarter but the Wolverines fired back again from the 12-7 deficit.

They rolled 77 yards in nine plays and it was a 28-yard run by the hard-to-tackle sophomore, Billy Taylor, that advanced the ball to the five-yard line.

Moorhead again handed off to Craw and the big fullback powered to the one and then over left tackle for his second TD. Little more than three minutes had elapsed in the second period and when Titas kicked another extra point it was 14-12.

Moments later, the Wolverines tallied again following Pierson’s dazzling zig-zag run with a punt he fielded on the Michigan 37 and returned to the Ohio State three.

Moorhead sent Craw unto the line for a yard and then baffled the Buckeyes by faking to Craw, and keeping to score from the two.

Following a missed field goal by Ohio, the Wolverines marched again with the kind of sustained drive that can take a lot of starch out of an opponent.

Michigan went 80 yards with Moorhead throwing a three-yard TD pass to Mandich. But the Wolverines were penalized five yards for illegal procedure and were forced to go for the field goal which Tim Killian converted.

Fullback Jim Otis scored Ohio State’s first touchdown on a one-yard plunge after Larry Zelina had returned Mark Werner’s punt from the Ohio 48 to the 16.

On the first play of the second quarter, when the Buckeyes had third down and 14 yards to go at the Michigan 22, Kern flipped a short pass to Jim White and the big junior rambled all the way to the end zone.

An off-target snap from center had snarled Ohio’s first extra-point attempt and when Stan White converted after the second touchdown, Michigan was penalized half-way to the goal for offside. With only one and a half yards to go for two extra points, Hayes ordered a try for two but Mike Keller tackled Kern before he could pass.