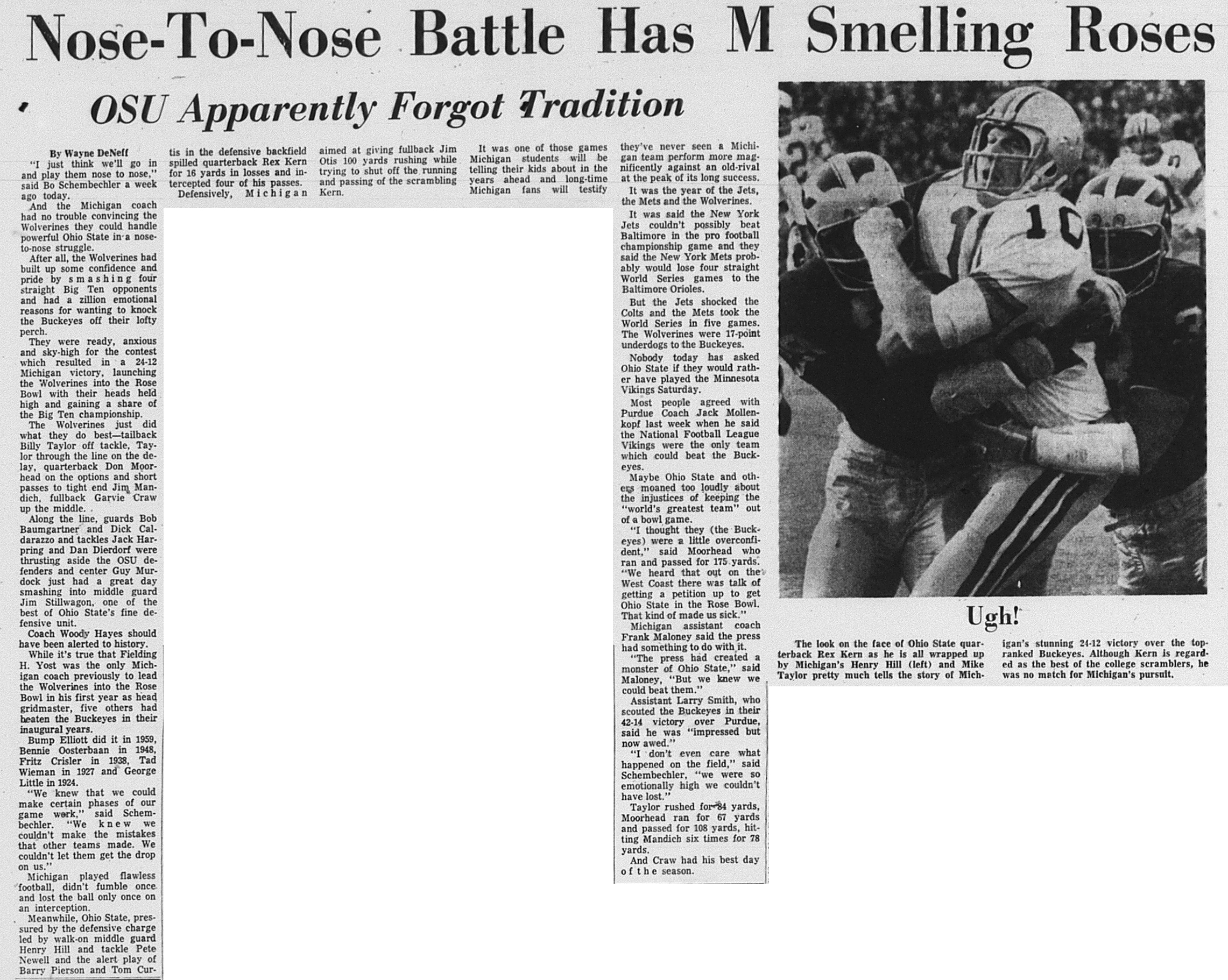 “I just think we’ll go in and play them nose to nose,” said Bo Schembechler a week ago today.

And the Michigan coach had no trouble convincing the Wolverines they could handle powerful Ohio State in a nose-to-nose struggle.

After all, the Wolverines had built up some confidence and pride by smashing four straight Big Ten opponents and had a zillion emotional reasons for wanting to knock the Buckeyes off their lofty perch.

They were ready, anxious and sky-high for the contest which resulted in a 24-12 Michigan victory, launching the Wolverines into the Rose Bowl with their heads held high and gaining a share of the Big Ten championship.

The Wolverines just did what they do best—tailback Billy Taylor off tackle, Taylor through the line on the delay, quarterback Don Moorhead on the options and short passes to tight end Jim Mandich, fullback Garvie Craw up the middle.

Along the line, guards Bob Baumgartner and Dick Caldarazzo and tackles Jack Harpring and Dan Dierdorf were thrusting aside the OSU defenders and center Guy Murdock just had a great day smashing into middle guard Jim Stillwagon, one of the best of Ohio State’s fine defensive unit.

Coach Woody Hayes should have been alerted to history.

While it’s true that Fielding H. Yost was the only Michigan coach previously to lead the Wolverines into the Rose Bowl in his first year as head gridmaster, five others had beaten the Buckeyes in their inaugural years.

“We knew that we could make certain phases of our game work,” said Schembechler. “We knew we couldn’t make the mistakes that other teams made. We couldn’t let them get the drop on us.”

Michigan played flawless football, didn’t fumble once and lost the ball only once on an interception.

Meanwhile, Ohio State, pressured by the defensive charge led by walk-on middle guard Henry Hill and tackle Pete Newell and the alert play of Barry Pierson and Tom Curtis in the defensive backfield spilled quarterback Rex Kern for 16 yards in losses and intercepted four of his passes.

Defensively, Michigan aimed at giving fullback Jim Otis 100 yards rushing while trying to shut off the running and passing of the scrambling Kern.

It was one of those games Michigan students will be telling their kids about in the years ahead and long-time Michigan fans will testify they’ve never seen a Michigan team perform more magnificently against an old rival at the peak of its long success.

It was the year of the Jets, the Mets and the Wolverines.

But the Jets shocked the Colts and the Mets took the World Series in five games. The Wolverines were 17-point underdogs to the Buckeyes.

Nobody today has asked Ohio State if they would rather have played the Minnesota Vikings Saturday.

Most people agreed with Purdue Coach Jack Mollenkopf last week when he said the National Football League Vikings were the only team which could beat the Buckeyes.

Maybe Ohio State and other moaned too loudly about the injustices of keeping the “world’s greatest team” out of a bowl game.

“I thought they (the Buckeyes) were a little overconfident,” said Moorhead who ran and passed for 175 yards. “We heard that out on the West Coast there was talk of getting a petition up to get Ohio State in the Rose Bowl. That kind of made us sick.”

Michigan assistant coach Frank Maloney said the press had something to do with it.

“The press had created a monster of Ohio State,” said Maloney. “But we knew we could beat them.”

Assistant Larry Smith, who scouted the Buckeyes in their 42-14 victory over Purdue, said he was “impressed but not awed.”

“I don’t even care what happened on the field,” said Schembechler, “we were so emotionally high we couldn’t have lost.”

And Craw had his best day of the season.

PHOTO CAPTION: Ugh!: The look on the face of Ohio State quarterback Rex Kern as he is all wrapped up by Michigan’s Henry Hill (left) and Mike Taylor pretty much tells the story of Michigan’s stunning 24-12 victory over the top-ranked Buckeyes. Although Kern is regarded as the best of the college scramblers, he was no match for Michigan’s pursuit.