U-M Band Is Tuning Up For Trip To Rose Bowl 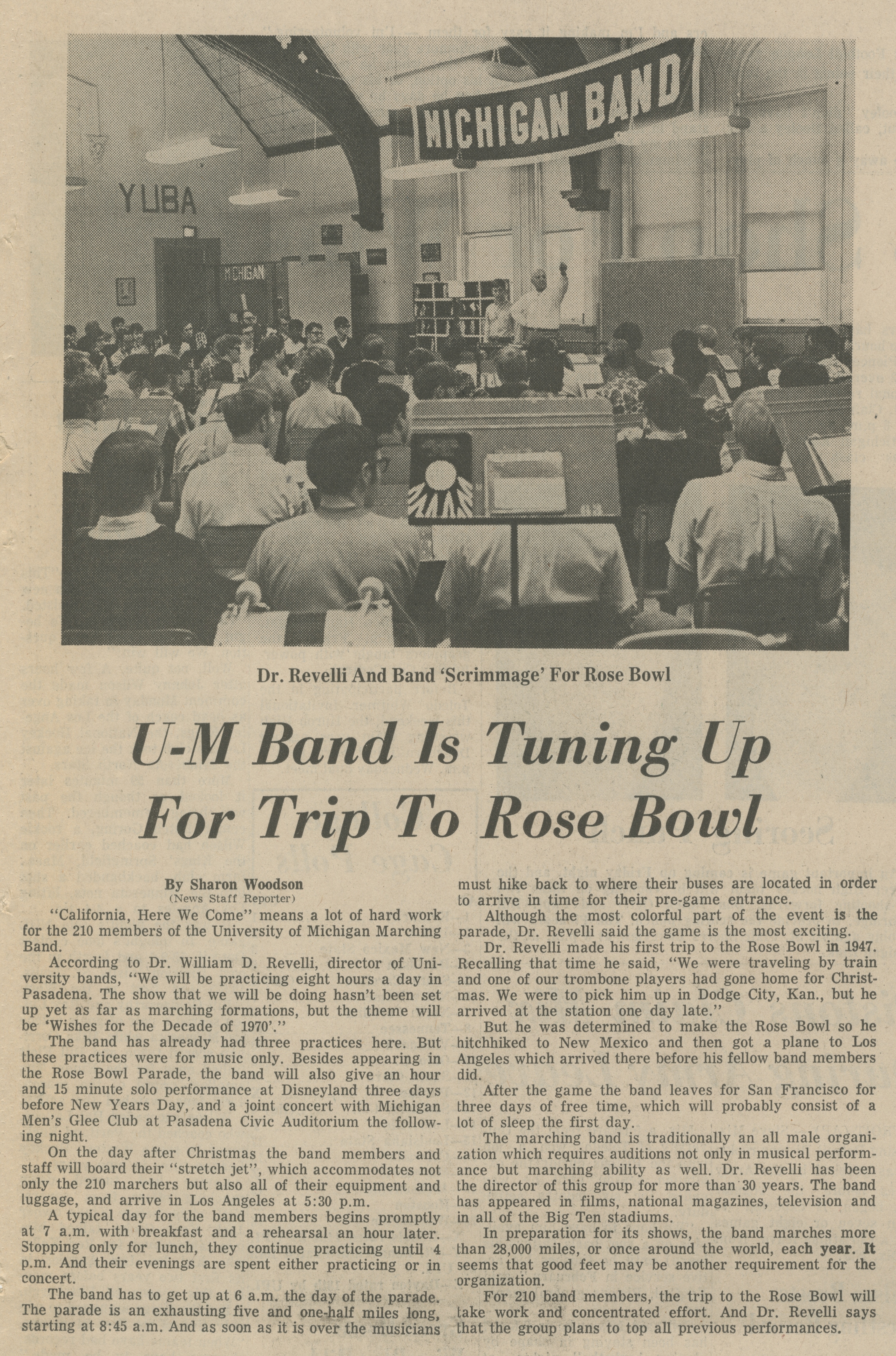 “California, Here We Come” means a lot of hard work for the 210 members of the University of Michigan Marching band.
According to Dr. William D. Revelli, director of University bands, “We will be practicing eight hours a day in Pasadena. The show that we will be doing hasn’t been set up yet as far as marching formations, but the theme will be ‘Wishes for the Decade of 1970’.”
The band has already had three practices here. But these practices were for music only. Besides appearing in the Rose Bowl Parade, the band will also give an hour and 15 minute solo performance at Disneyland three days before New Years Day, and a joint concert with Michigan Men’s Glee Club at Pasadena Civic Auditorium the following night.
On the day after Christmas the band members and staff will board their “stretch jet,” which accommodates not only the 210 marchers but also all of their equipment and luggage, and arrive in Los Angeles at 5:30 p.m.
A typical day for the band members begins promptly at 7 a.m. with breakfast and a rehearsal an hour later. Stopping only for lunch, they continue practicing until 4 p.m. And their evenings are spent either practicing or in concert.
The band has to get up at 6 a.m. the day of the parade. The parade is an exhausting five and one-half miles long, starting at 8:45 a.m. And as soon as it is over the musicians must hike back to where their buses are located in order to arrive in time for their pre-game entrance.
Although the most colorful part of the event is the parade, Dr. Revelli said the game is the most exciting.
Dr. Revelli made his first trip to the Rose Bowl in 1947. Recalling that time he said, “We were traveling by train and one of our trombone players had gone home for Christmas. We were to pick him up in Dodge City, Kan., but he arrived at the station one day late.”
But he was determined to make the Rose Bowl so he hitchhiked to New Mexico and then got a plane to Los Angeles which arrived there before his fellow band members did.
After the game the band leaves for San Francisco for three days of free time, which will probably consist of a lot of sleep the first day.
The marching band is traditionally an all male organization which requires auditions not only in musical performance but marching ability as well. Dr. Revelli has been the director of this group for more than 30 years. The band has appeared in films, national magazines, television and in all of the Big Ten stadiums.
In preparation for its shows, the band marches more than 28,000 miles, or once around the world, each year. It seems that good feet may be another requirement for the organization.
For 210 band members, the trip to the Rose Bowl will take work and concentrated effort. And Dr. Revelli says that the group plans to top all previous performances.