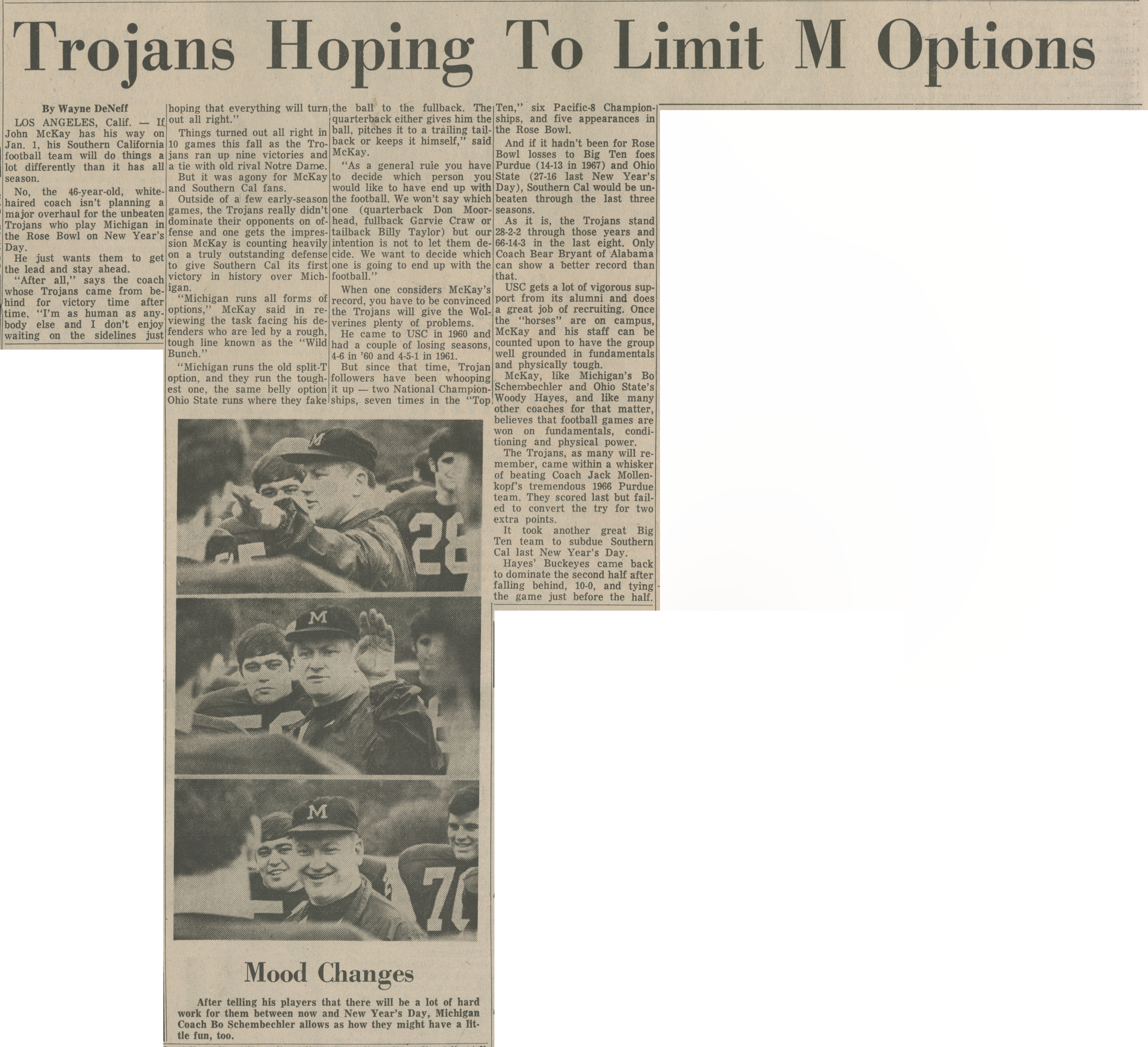 LOS ANGELES, Calif.—If John McKay has his way on Jan. 1, his Southern California football team will do things a lot differently than it has all season.

No, the 46-year-old, white-haired coach isn’t planning a major overhaul for the unbeaten Trojans who play Michigan in the Rose Bowl on New Year’s Day.

He just wants them to get the lead and stay ahead.

“After all,” says the coach whose Trojans came from behind for victory time after time, “I’m as human as anybody else and I don’t enjoy waiting on the sidelines just hoping that everything will turn out all right.”

Things turned out all right in 10 games this fall as the Trojans ran up nine victories and a tie with old rival Notre Dame.

But it was agony for McKay and Southern Cal fans.

Outside of a few early-season games, the Trojans really didn’t dominate their opponents on offense and one gets the impression McKay is counting heavily on a truly outstanding defense to give Southern Cal its first victory in history over Michigan.

“Michigan runs all forms of options,” McKay said in reviewing the task facing his defenders who are led by a rough, tough line known as the “Wild Bunch.”

“Michigan runs the old split-T option, and they run the toughest one, the same belly option Ohio State runs where they fake the ball to the fullback. The quarterback either gives him the ball, pitches it to a trailing tailback or keeps it himself,” said McKay.

When one considers McKay’s record, you have to be convinced the Trojans will give the Wolverines plenty of problems.

But since that time, Trojan followers have been whooping it up—two National Championships, seven times in the “Top Ten,” six Pacific-8 Championships, and five appearances in the Rose Bowl.

And if it hadn’t been for Rose Bowl losses to Big Ten foes Purdue (14-13 in 1967) and Ohio State (27-16 last New Year’s Day), Southern Cal would be unbeaten through the last three seasons.

As it is, the Trojans stand 28-2-2 through those years and 66-14-3 in the last eight. Only Coach Bear Bryant of Alabama can show a better record than that.

USC gets a lot of vigorous support from its alumni and does a great job of recruiting. Once the “horses” are on campus, McKay and his staff can be counted upon to have the group well grounded in fundamentals and physically tough.

McKay, like Michigan’s Bo Schembechler, and Ohio State’s Woody Hayes, and like many other coaches for that matter, believes that football games are won on fundamentals, conditioning and physical power.

The Trojans, as many will remember, came within a whisker of beating Coach Jack Mollenkopf’s tremendous 1966 Purdue team. They scored last but failed to convert the try for two extra points.

Hayes’ Buckeyes came back to dominate the second half after falling behind, 10-0, and tying the game just before the half.

PHOTO CAPTION: Mood Changes: After telling his players that there will be a lot of hard work for them between now and New Year’s Day, Michigan Coach Bo Schembechler allows as how they might have a little fun, too.