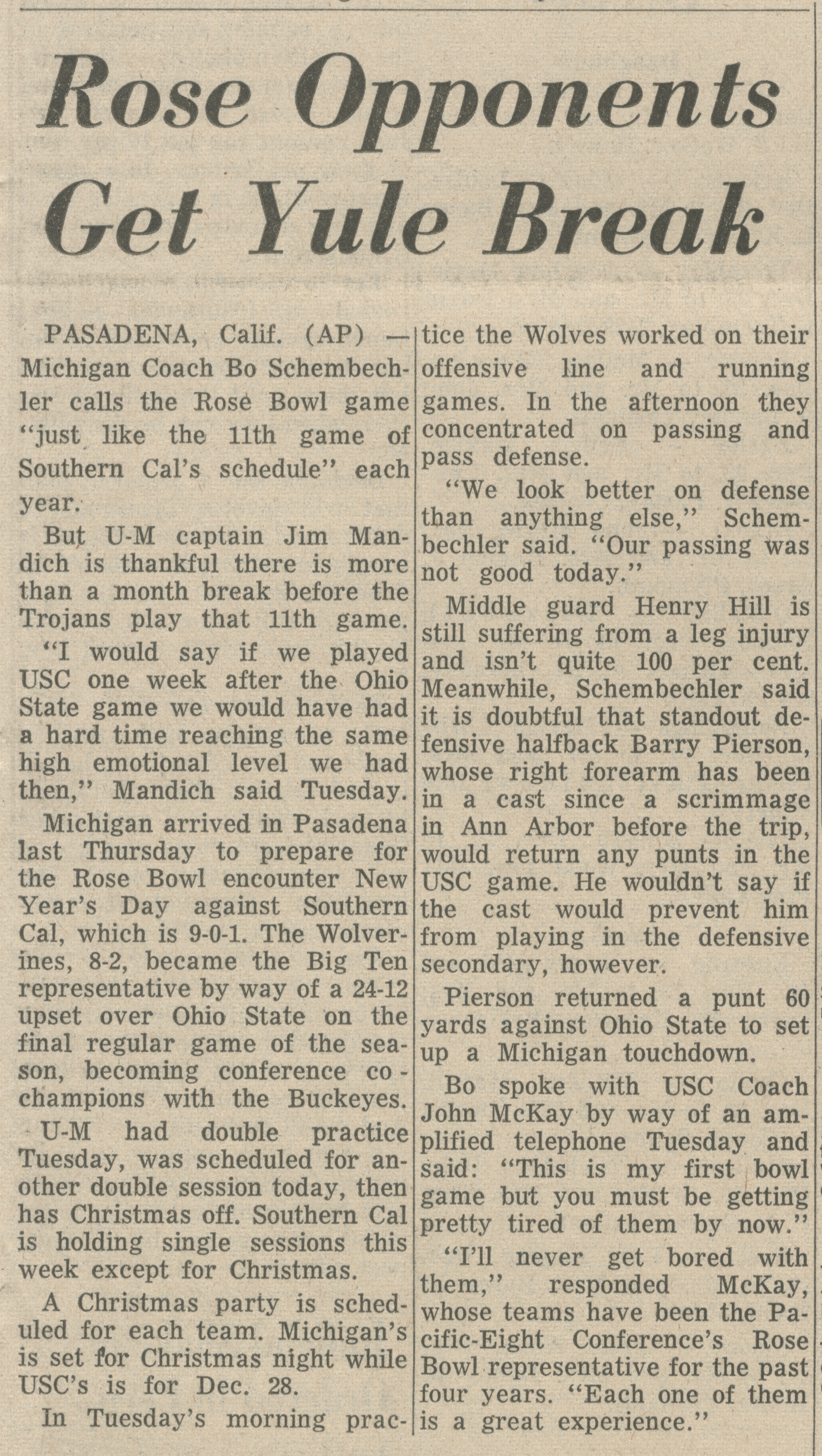 But U-M captain Jim Mandich is thankful there is more than a month break before the Trojans play that 11th game.

“I would say if we played USC one week after the Ohio State game we would have had a hard time reaching the same emotional level we had then,” Mandich said Tuesday.

Michigan arrived in Pasadena last Thursday to prepare for the Rose bowl encounter New Year’s Day against Southern Cal, which is 9-0-1. The Wolverines, 8-2, became the Big Ten representative by way of a 24-12 upset over Ohio State on the final regular game of the season, becoming conference co-champions with the Buckeyes.

U-M had double practice Tuesday, was scheduled for another double session today, then has Christmas off. Southern Cal is holding single sessions this week except for Christmas.

A Christmas party is scheduled for each team. Michigan’s is set for Christmas night while USC’s is for Dec. 28.

In Tuesday’s morning practice the Wolves worked on their offensive line and running games. In the afternoon they concentrated on passing and pass defense.

“We look better on defense than anything else,” Schembechler said. “Our passing was not good today.”

Middle guard Henry Hill is still suffering from a leg injury and isn’t quite 100 percent. Meanwhile, Schembechler said it is doubtful that standout defensive halfback Barry Pierson, whose right forearm has been in a cast since a scrimmage in Ann Arbor before the trip, would return any punts in the USC game. He wouldn’t say if the cast would prevent him from playing in the defensive secondary, however.

Pierson returned a punt 60 yards against Ohio State to set up a Michigan touchdown.

Bo spoke with USC Coach John McKay by way of an amplified telephone Tuesday and said: “This is my first bowl game but you must be getting pretty tired of them by now.”

“I’ll never get bored with them,” responded McKay, whose teams have been the Pacific-Eight Conference’s Rose Bowl representative for the past four years. “Each one of them is a great experience.”