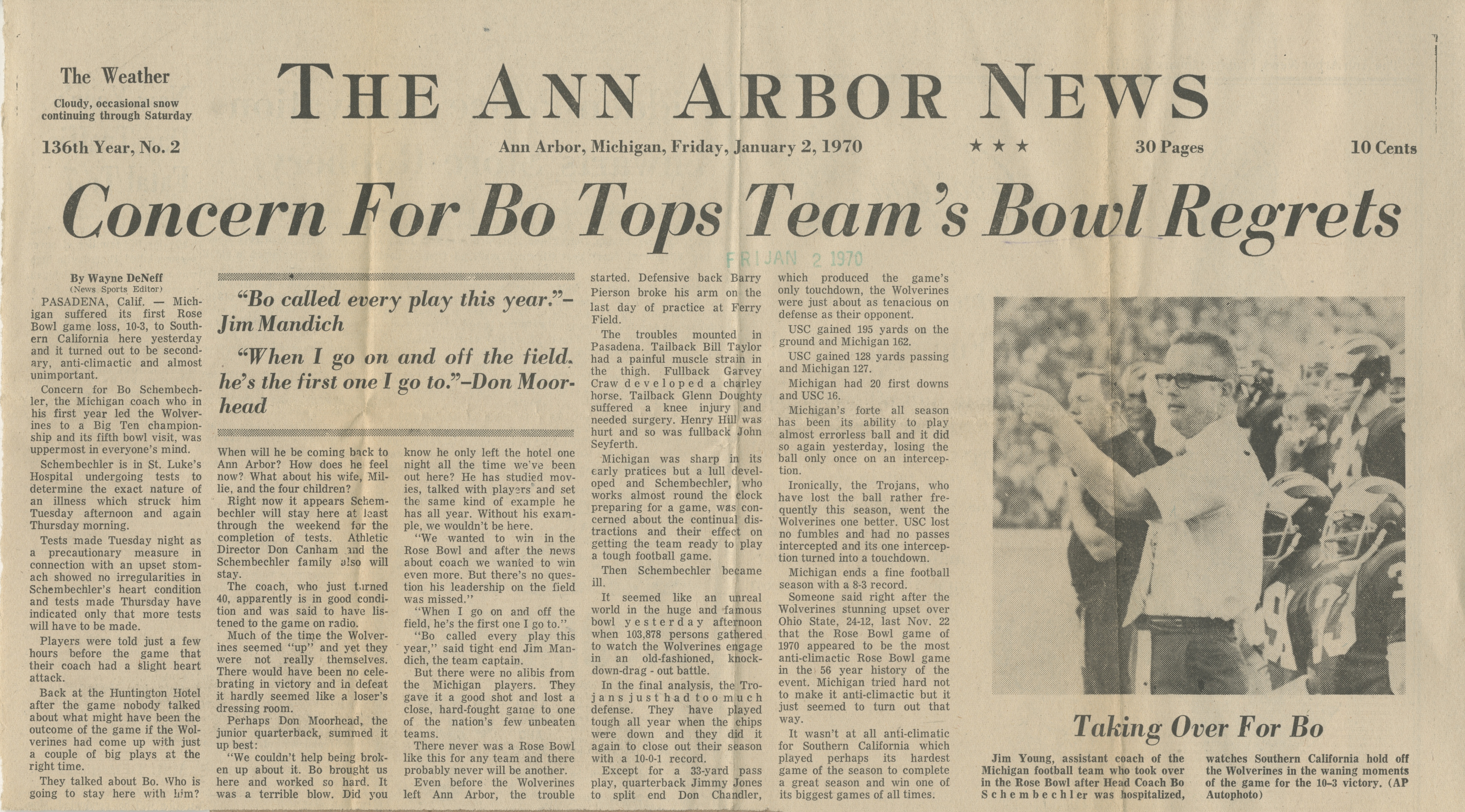 PASADENA, Calif. - Michigan suffered its first Rose Bowl game loss, 10-3, to Southern California here yesterday and it turned out to be secondary, anti-climactic and almost unimportant.

Concern for Bo Schembechler, the Michigan coach who in his first year led the Wolverines to a Big Ten championship and its fifth bowl visit, was uppermost in everyone's minds.

Schembechler is in St. Luke's Hospital undergoing tests to determine the exact nature of an illness which struck him Tuesday afternoon and again Thursday morning.

Tests made Tuesday night as a precautionary measure in connection with an upset stomach showed no irregularities in Schembechler's heart condition and tests made Thursday have indicated only that more tests will have to be made.

Players were told just a few hours before the game that their coach had a slight heart attack.

Back at the Huntington Hotel after the game nobody talked about what might have been the outcome of the game if the Wolverines had come up with just a couple of big plays at the right time.

They talked about Bo. Who is going to stay here with him? When will he be coming back to Ann Arbor? How does he feel now? What about his wife, Millie, and the four children?

Right now it appears Schembechler will stay here at least through the weekend for the completion of tests. Athletic Director Don Canham and the Schembechler family also will stay.

The coach, who just turned 40, apparently is in good condition and was said to have listened to the game on the radio.

Much of the time the Wolverines seemed "up" and yet they were not really themselves. There would have been no celebrating in victory and in defeat it hardly seemed like a loser's dressing room.

Perhaps Don Moorhead, the junior quarterback, summed it up best:

"We couldn't help being broken up about it. Bo brought us here and worked so hard. It was a terrible blow. Did you know he only left the hotel one night all the time we've been out here? He has studied movies, talked with players and set the same kind of example he has all year. Without his example, we wouldn't be here.

"We wanted to win in the Rose Bowl and after the news about coach we wanted to win even more. But there's no question his leadership on the field was missed."

But there were no alibis from the Michigan players. They gave it a good shot and lost a close, hard-fought game to one of the nation's few unbeaten teams.

There never was a Rose Bowl like this for any team and there probably never will be another.

Even before the Wolverines left Ann Arbor, the trouble started. Defensive back Barry Pierson broke his arm on the last day of practice at Ferry Field.

The troubles mounted in Pasadena. Tailback Bill Taylor had a painful muscle strain in the thigh. Fullback Garvey Craw developed a charley horse. Tailback Glenn Doughty suffered a knee injury and needed surgery. Henry Hill was hurt and so was fullback John Seyferth.

Michigan was sharp in its early practices but a lull developed and Schembechler, who works almost round the clock preparing for a game, was concerned about the continual distractions and their effect on getting the team ready to play a tough football game.

It seemed like an unreal world in the huge and famous bowl yesterday afternoon when 103,878 persons gathered to watch the Wolverines engage in an old-fashioned, knock-down-drag-out battle.

In the final analysis, the Trojans just had too much defense. They have played tough all year when the chips were down and they did it again to close out their season with a 10-0-1 record.

Except for a 33-yard pass play, quarterback Jimmy Jones to split end Don Chandler, which produced the game's only touchdown, the Wolverines were just about as tenacious on defense as their opponent.

Michigan's forte all season has been its ability to play almost errorless ball and it did so again yesterday, losing the ball only once on an interception.

Ironically, the Trojans, who have lost the ball rather frequently this season, went the Wolverines one better. USC lost no fumbles and had no passes intercepted and its one interception turned into a touchdown.

Michigan ends a fine football season with a 8-3 record.

It wasn't at all anti-climatic for Southern California which played perhaps its hardest game of the season to complete a great season and win one of its biggest games of all times.

Taking Over For Bo
Jim Young, assistant coach of the Michigan football team who took over in the Rose Bowl after Head Coach Bo Schembechler was hospitalized, watches Southern California hold off the Wolverines in the waning moments of the game for the 10-3 victory. (AP Autophoto)