The Alcoholic: Sinner Or Spoiled Brat? 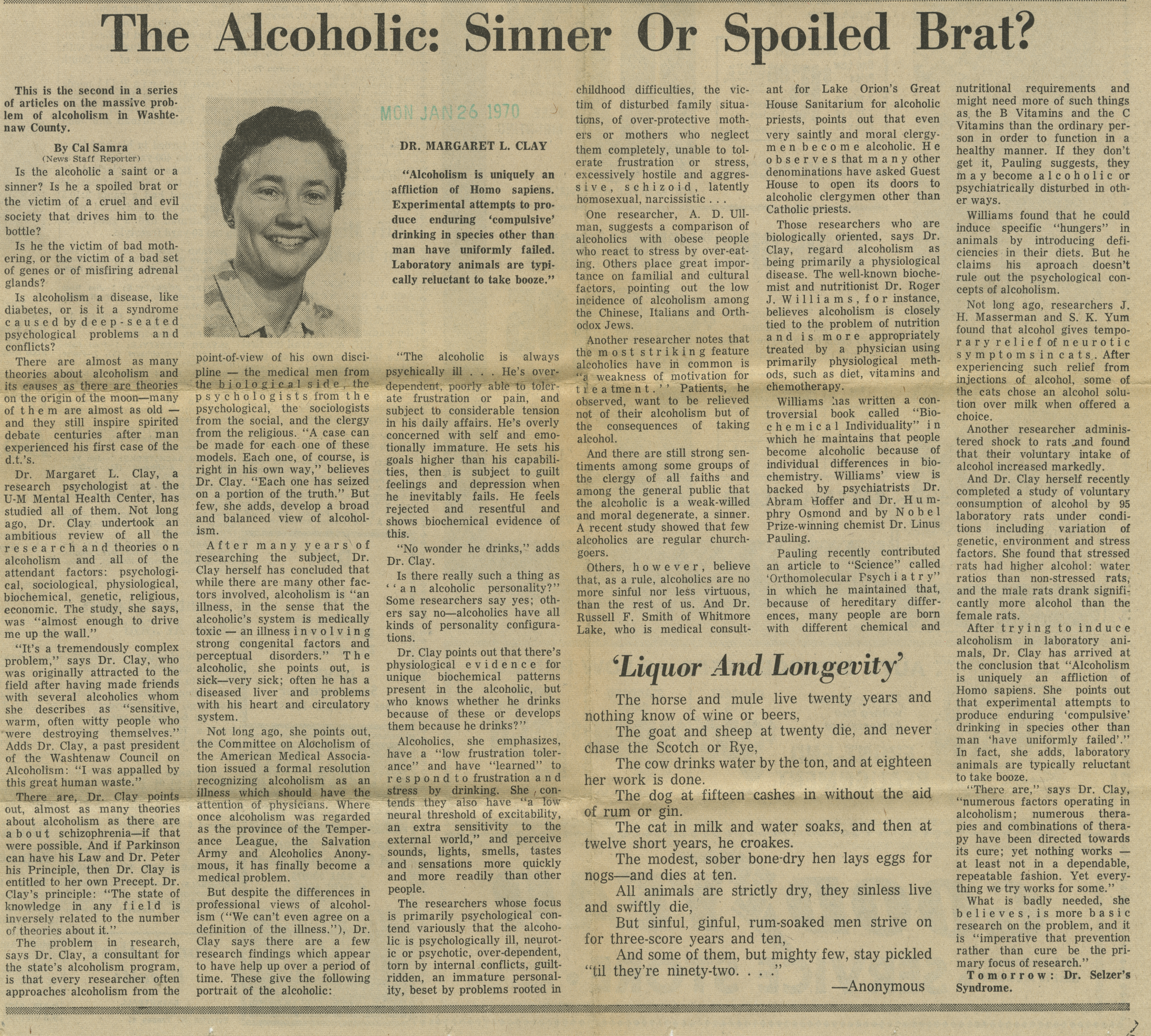 ﻿The Alcoholic: Sinner Or Spoiled Brat?

This is the second in a series of articles on the massive problem of alcoholism in Washtenaw County.

Is the alcoholic a saint or sinner? Is he a spoiled brat or the victim of a cruel and evil society that drives him to the bottle?

Is alcoholism a disease, like diabetes, or is it a syndrome caused by deep-seated psychological problems and conflicts?

They’re almost is miniseries about alcoholism and its causes as there are theories on the origin of the moon— many of them are almost as old — and they still inspire spirited debate centuries after man experienced his first case of the DTs.

Dr. Margaret L. Clay, a research psychologist U-M Mental  Health Center, has studied all of them. Not long ago, Dr. Clay under took an ambitious review of all the research and theories on alcoholism and all of the attendant factors: psychological, sociological, physiological, biochemical, genetic, religious, economic. The study, she says, was “almost enough to drive me up the wall.”

“It’s a tremendously complex problem“ says Dr. Clay, who was originally attracted to the field after having made friends with several alcoholics who she described as “sensitive, warm, often with the people who were destroying themselves.”  add Dr. Clay, a past president of the Washtenaw Council on Alcoholism: “I was a palled by this great human waste.“

There are, Dr. Clay points out, almost as many theories about alcoholism as there are about schizophrenia – if that were possible. And if Parkinson can have his Law and Dr. Peter his Principle, then Dr. Clay is entitled to her own Percept. Dr. Clay’s principle: “The state of knowledge in any field is inversely related to the number of theories about it."

The problem in research says Dr. Clay, a consultant for the state’s alcoholism program, is that every researcher often approaches alcoholism from the Point of view of his or her own discipline – the medical men from the biological side, psychologist from the psychological, sociologist from the social, and the clergy from the religion. “A case can be made for each one of these models. Each one, of course is the right in his own way,” believes Dr. Clay. “Each one has ceased on a portion of truth. “But few, she adds, develop a broad and balanced view of alcoholism.

After many years of researching the subject, Dr. Clay herself has concluded that while there are many other factors involved, alcoholism is “an illness, in the same sense that the alcoholic’s system is medically toxic — and illness involving strong congenital factors and perpetual disorders.“ The alcoholic, she points out, is sick – very sick; often he has a diseased liver and problems with his heart and circulatory system.

Not long ago, she points out, The Committee on Alcoholism of the American Medical Association issued a formal resolution recognizing alcoholism as an illness which should have the attention of physicians. Where once alcoholism was regarded as the province of the Temperance League, the Salvation Army and Alcoholics Anonymous, it has finally become a medical problem.

But despite the differences and professional views of alcoholism (“We can’t even agree on a definition of the illness.“), Dr. Clay says there are a few research findings which appear to have help up over a period of time. These give the following portrait of the alcoholic:

“Alcoholism is uniquely an affliction of Homo sapiens. Experimental attempts to produce enduring ‘compulsive’ drinking in species other than man have uniformly failed. Laboratory animals are typically reluctant to take booze.”

“The alcoholic is always physically ill... he’s over-dependent, poorly able to tolerate frustration or pain, and subject to considerable tension in his daily affairs. He’s overly concerned with self and emotionally immature. He sets his goals higher than his capabilities, then is subject to guilt feelings and depression when he inevitably fails. He feels rejected and resentful and shows bio chemical evidence of this.

Is there really such a thing as “an alcoholic personality? “Some researchers say yes; others say no — alcoholics have all kinds of personality configurations.

Dr. Clay points out that there’s physiological evidence for unique biochemical patterns present in the alcoholic, but who knows whether he drinks because of these or develops them because he drinks?

Alcoholics, she emphasizes have a “low frustration tolerance“ and have “learned” to respond to frustration and stress by drinking. She contains they also have “a low neural threshold of excitability, and extra sensitivity to the external world,“ and perceive sounds, lights, smells, taste in sensations more quickly and more readily than other people.

The researchers whose focus is primarily psychological contend variously that the alcoholic is psychologically ill, neurotic or psychotic, over-dependent, torn by internal conflict, guilt ridden, an immature personality, beset by problems rooted in childhood difficulties, the victim of disturbed family situations, of overprotective mothers or mothers who neglect them completely, unable to tolerate frustration or stress, excessively hostile and aggressive, schizoid, latently homosexual, narcissistic…

One researcher, A.D. Ullman , Suggest a comparison of alcoholics with obese people who react to stress by over eating. Other places great importance on familiar girl if you don’t get us together is familial and cultural factors, pointing out the low incidence of alcoholism among the Chinese, Italians and Orthodox Jews.

Another researcher notes that the most striking feature alcoholics have in common is “a weakness of motivation for treatment.” Patients, he observed, want to be relieved not of their alcoholism but of the consequences of taking alcohol.

And there are still strong sentiments among some groups of clergy of all faiths and among the general public that the alcoholic is a weak-willed in moral degenerate, a sinner. A recent study showed that few alcoholics are regularly church-goers.

Others, however, believe that, as a rule, alcoholics are no more sinful normal less virtuous, then the rest of us. And Dr. Russell F. Smith of Whitmore Lake, who is medical consultant for Lake Orion’s Great House Sanitarium for alcoholic priests, points out that even very saintly and moral clergy-men become alcoholic. he observes that many other denominations have asked Guess House to open its doors to alcoholic clergymen other than Catholic priests.

Those researchers who are biologically oriented, says Dr. Clay, regard alcoholism as being primarily a physiological disease. The well-known biochemist and nutritionist Dr. Roger J. Williams, for instance, believes alcoholism is closely tied to the problem of nutrition and is more appropriately treated by a physician using primarily physiological methods, such as diet, vitamins and chemotherapy.

Williams has written a controversial book called “Biochemical Individuality“ in which he maintains that people become alcoholic because of individual differences in biochemistry. Williams’  view is backed by psychiatrist Dr. Abram Hoffer and Dr. Humphrey Osmond and by Nobel Prize/winning chemist Dr. Linus Pauling.

Pauling recently contributed an article to "Science" called “Orthomolecular Psychiatry” in which she maintained that because of hereditary differences many people are born with different chemical and nutritional requirements and might need more of such things as the B Vitamins and C Vitamins than the ordinary person in order to function in a healthy manner.  If they don’t get it, Pauling suggests, they may become alcoholic or psychologically disturbed in other ways.

Williams found that he could induce specific “hungers" in animals by introducing deficiencies in their diets. But he claims his approach doesn’t rule out the psychological concepts of alcoholism.

Not long ago, researchers J. H. Masserman and S. K. Yum found that alcohol gives temporary relief for neurotic symptoms in cats. After experiencing such relief from injections of alcohol some of the cats chose an alcohol solution of a milk would offered the choice.

Another researcher administrated shocked as rats and found their voluntary intake of alcohol increased markedly.

And Dr. Clay herself recently completed a study of voluntary consumption of alcohol by 95 laboratory rats under conditions including variations of genetic, environment and stress factors. She found that stressed rats had higher alcohol: water ratios than non-stressed rats, and the male rats drank significantly more alcohol than the female rats.

After trying to induce alcoholism and laboratory animals, Dr. Clay has arrived at the conclusion that “Alcoholism is uniquely an affliction of Homo sapiens. Experimental attempts to produce enduring ‘compulsive’ drinking in species other than man have uniformly failed. Laboratory animals are typically reluctant to take booze.

“there are,“ says Dr. Clay “, numerous factors operating in alcoholism; numerous therapies and combinations of therapy have been directed towards its cure; yet nothing works – at least not in a dependable fashion. Yeah everything we try works for some.”

What is badly needed, she believes, is more basic research on the problem, and it is “imperative that prevention rather than cure be the primary focus of research.”

The horse and mule with twenty years and nothing known of wine or beers,

The goat and sheep at twenty die, and never chase the Scotch or Rye,

The cow drinks water by the ton, and at eighteen her work is done.

The dog at fifteen cashes in without the aid of rum or gin.

The cat in milk and water soaks, and then at twelve short years, he croaks.

The modest, sober bone-dry hen lays eggs for nogs — and dies at ten.

All animals are strictly dry, they senseless

All animals are strictly dry, they sinless live and swiftly die, but sinful, ginful, rum-soaked men strive on for three-score years and ten,

And some of them, but mighty few, stay pickled “til they’re ninety-two.”