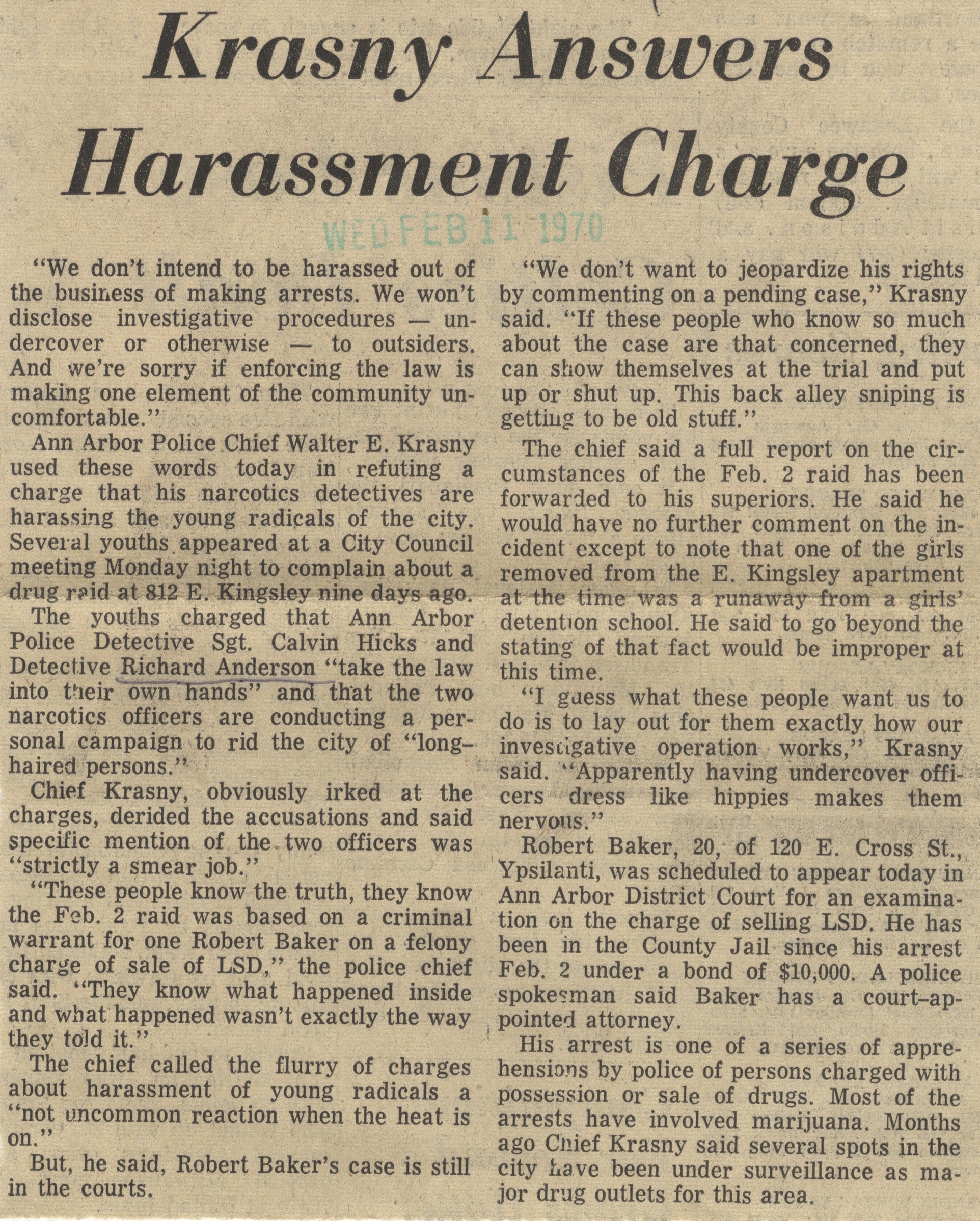 "We don't intend to be harassed out of the business of making arrests. We won't disclose investigative procedures - undercover or otherwise - to outsiders. And we're sorry if enforcing the law is making one element of the community uncomfortable." Ann Arbor Police Chief Walter E. Krasny used these words today in refuting a charge that his narcotics detectives are harassing the young radicals of the city. Several youths appeared at a City Council meeting Monday night to complain about a drug raid at 812 E. Kingsley nine days ago. The youths charged that Ann Arbor Police Detective Sgt. Calvin Hicks and Detective Richard Anderson "take the law into their own hands" and that the two narcotics officers are conducting a personal campaign to rid the city of "long-haired persons." Chief Krasny, obviously irked at the charges, derided the accusations and said specific mention of the two officers was "strictly a smear job." "These people know the truth, they know the Feb. 2 raid was based on a criminal warrant for one Robert Baker on a felony charge of sale of LSD," the police chief said. "They know what happened inside and what happened wasn't exactly the way they told it." The chief called the flurry of charges about harassment of young radicals a "not uncommon reaction when the heat is on." But, he said, Robert Baker's case is still in the courts. "We don't want to jeopardize his rights by commenting on a pending case," Krasny said. "If these people who know so much about the case are that concerned, they can show themselves at the trial and put up or shut up. This back alley sniping is getting to be old stuff." The chief said a full report on the circumstances of the Feb. 2 raid has been forwarded to his superiors. He said he would have no further comment on the incident except to note that one of the girls removed from the E. Kingsley apartment at the time was a runaway from a girls' detention school. He said to go beyond the stating of that fact would be improper at this time. "I guess what these people want us to do is to lay out for them exactly how our investigative operation works," Krasny said. "Apparently having undercover officers dress like hippies makes them nervous." Robert Baker, 20, of 120 E. Cross St., Ypsilanti, was scheduled to appear today in Ann Arbor District Court for an examination on the charge of selling LSD. He has been in the County Jail since his arrest Feb. 2 under a bond of $10,000. A police spokesman said Baker has a court-appointed attorney. His arrest is one of a series of apprehensions by police of persons charged with possession or sale of drugs. Most of the arrests have involved marijuana. Months ago Chief Krasny said several spots in the city have been under surveillance as major drug outlets for this area.