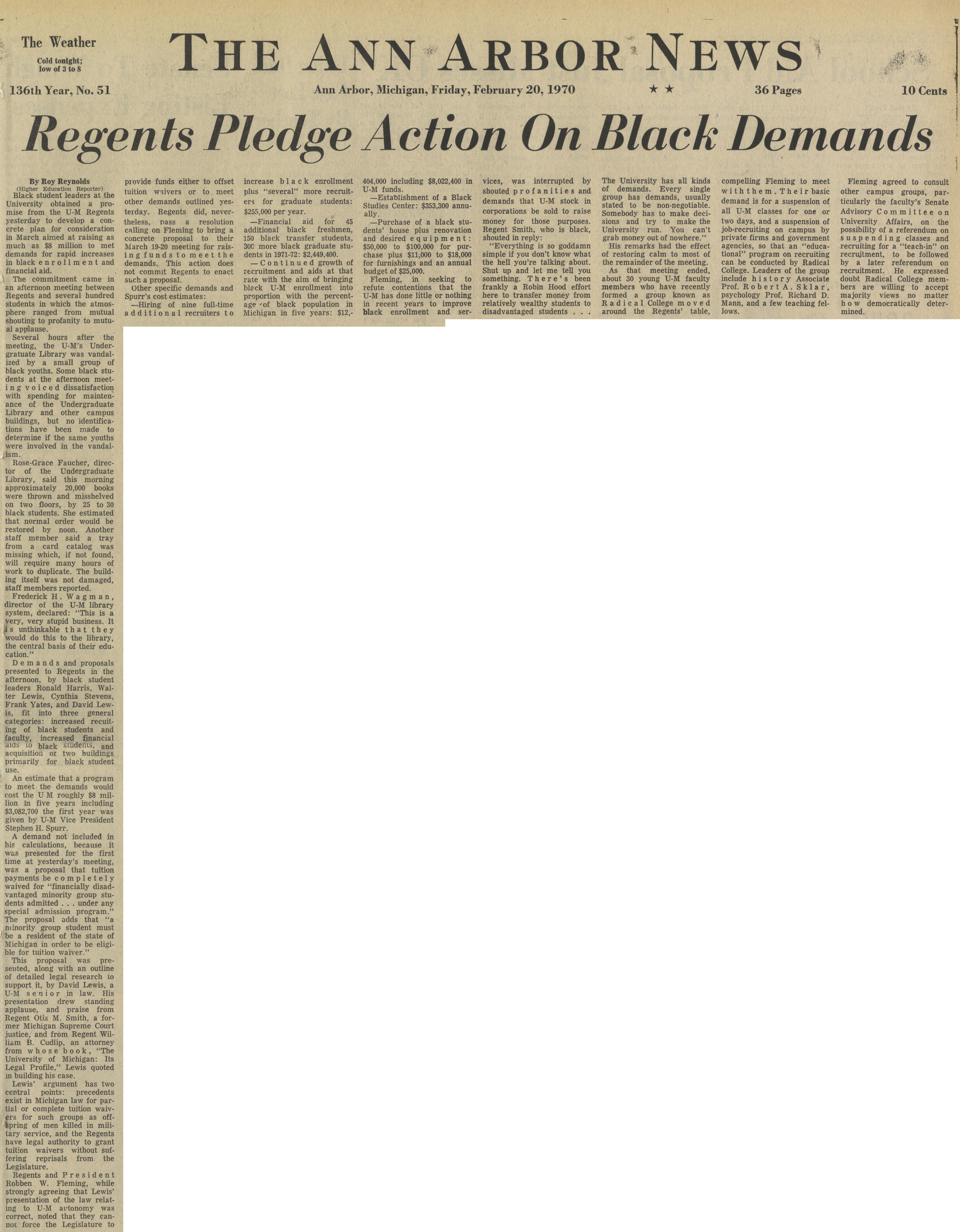 Black student leaders at the University obtained a promise from the U-M Regents yesterday to develop a concrete plan for consideration in March aimed at raising as much as $8 million to met demands for rapid increases in black enrollment and financial aid.

The commitment came in an afternoon meeting between Regents and several hundred students in which the atmosphere ranged from mutual shouting to profanity to mutual applause.

Several hours after the meeting, the U-M’s Under-graduate Library was vandalized by a small group of black youths. Some black students at the afternoon meeting voiced dissatisfaction with spending for maintenance of the Undergraduate Library and other campus buildings, but no identifications have been made to determine if the same youths were involved in the vandalism.

Rose-Grace Faucher, director of the Undergraduate Library, said this morning approximately 20,000 books were thrown and misshelved on two floors, by 25 to 30 black students. She estimated that normal order would be restored by noon. Another staff member said a tray from a card catalog was missing which, if not found, will require many hours of work to duplicate. The building itself was not damaged, staff members reported.

Frederick H. Wagman, director of the U-M library system, declared: “This is a very, very stupid business. It is unthinkable that they would do this to the library, the central basis of their education.”

An estimate that a program to meet the demands would cost the U M roughly $8 million In five years including $3,082,700 the first year was given by U-M Vice President Stephen H. Spurr.

A demand not included in his calculations, because it was presented for the first time at yesterday’s meeting, was a proposal that tuition payments be completely waived for “financially disadvantaged minority group students admitted . . . under any special admission program.” The proposal adds that “a minority group student must be a resident of the state of Michigan in order to be eligible for tuition waiver.”

This proposal was presented, along with an outline of detailed legal research to support it, by David Lewis, a U-M senior in law. His presentation drew standing applause, and praise from Regent Otis M. Smith, a former Michigan Supreme Court justice, and from Regent William B. Cudlip, an attorney from whose book, “The University of Michigan: Its Legal Profile,” Lewis quoted in building his case.

Lewis’ argument has two central points: precedents exist in Michigan law for partial or complete tuition waivers for such groups as offspring of men killed in military service, and the Regents have legal authority to grant tuition waivers without suffering reprisals from the Legislature.

Regents and President Robben W. Fleming, while strongly agreeing that Lewis’ presentation of the law relating to U-M autonomy was correct, noted that they cannot force the Legislature to provide funds either to offset tuition waivers or to meet other demands outlined yesterday. Regents did, nevertheless, pass a resolution calling on Fleming to bring a concrete proposal to their March 19-20 meeting for raising funds to meet the demands. This action does not commit Regents to enact such a proposal.

— Continued growth of recruitment and aids at that rate with the aim of bringing black U-M enrollment into proportion with the percentage -of black population in Michigan in five years: $12,404,000 including $8,022,400 in U-M funds.

Fleming, in seeking to refute contentions that the U-M has done little or nothing in recent years to improve black enrollment and services, was interrupted by shouted profanities and demands that U-M stock in corporations be sold to raise money for those purposes. Regent Smith, who is black, shouted in reply :

“Everything is so goddamn simple if you don’t know what the hell you’re talking about. Shut up and let me tell you something. There’s been frankly a Robin Hood effort here to transfer money from relatively wealthy students to disadvantaged students...The University has all kinds of demands. Every single group has demands, usually stated to be non-negotiable. Somebody has to make decisions and try to make the University run. You can’t grab money out of nowhere.”

His remarks had the effect of restoring calm to most of the remainder of the meeting. As that meeting ended, about 30 young U-M faculty members who have recently formed a group known as Radical College moved around the Regents’ table, compelling Fleming to meet with them.Their basic demand is for a suspension of all U-M classes for one or two days, and a suspension of job-recruiting on campus by private firms and government agencies, so that an “educational” program on recruiting can be conducted by Radical College. Leaders of the group include history Associate Prof. Robert A. Sklar, psychology Prof. Richard D. Mann, and a few teaching fellows.

Fleming agreed to consult other campus groups, particularly the faculty’s Senate Advisory Committee on University Affairs, on the possibility of a referendum on suspending classes and recruiting for a “teach-in” on recruitment, to be followed by a later referendum on recruitment. He expressed doubt Radical College members are willing to accept majority views no matter how democratically determined.