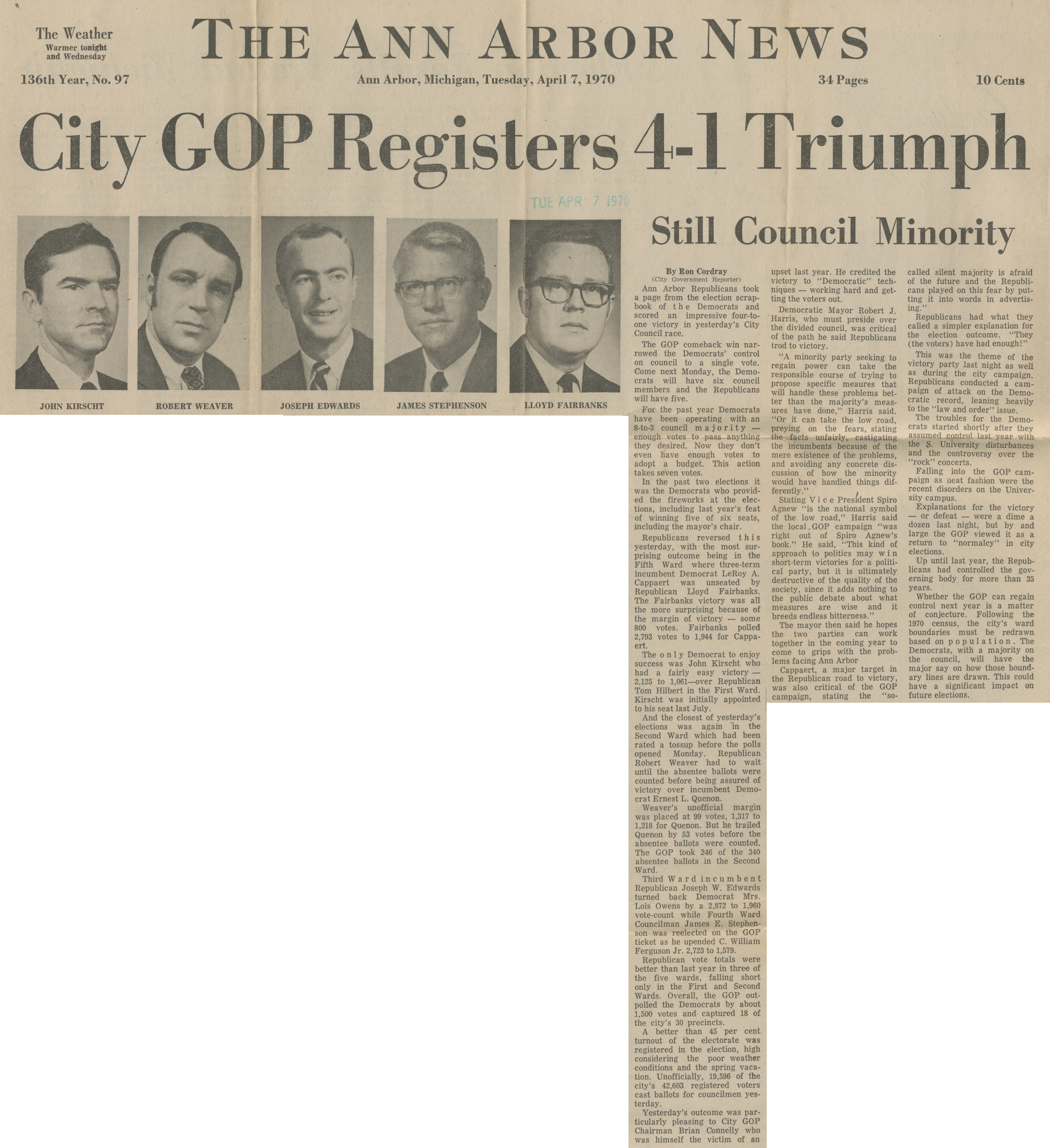 ﻿The Weather
Warmer tonight and Wednesday

Ann Arbor Republicans took a page from the election scrapbook of the Democrats and scored an impressive four-to-one victory in yesterday’s City Council race.

The GOP comeback win narrowed the Democrats’ control on council to a single vote. Come next Monday, the Democrats will have six council members and the Republicans will have five.

For the past year Democrats have been operating with an 8-to-3 council majority — enough votes to pass anything they desired. Now they don’t even have enough votes to adopt a budget. This action takes seven votes.

In the past two elections it was the Democrats who provided the fireworks at the elections, including last year’s feat of winning five of six seats, including the mayor’s chair.

Republicans reversed this yesterday, with the most surprising outcome being in the Fifth Ward where three-term incumbent Democrat LeRoy A. Cappaert was unseated by Republican Lloyd Fairbanks. The Fairbanks victory was all the more surprising because of the margin of victory — some 800 votes. Fairbanks polled 2,793 votes to 1,944 for Cappaert.

The only Democrat to enjoy success was John Kirscht who had a fairly easy victory — 2,125 to 1,061—over Republican Tom Hilbert in the First Ward. Kirscht was initially appointed to his seat last July.

And the closest of yesterday’s elections was again in the Second Ward which had been rated a tossup before the polls opened Monday. Republican Robert Weaver had to wait until the absentee ballots were counted before being assured of victory over incumbent Democrat Ernest L. Quenon.

Weaver’s unofficial margin was placed at 99 votes, 1,317 to 1,218 for Quenon. But he trailed Quenon by 53 votes before the absentee ballots were counted. The GOP took 246 of the 340 absentee ballots in the Second Ward.

Republican vote totals were better than last year in three of the five wards, falling short only in the First and Second Wards. Overall, the GOP out-polled the Democrats by about 1,500 votes and captured 18 of the city’s 30 precincts.

A better than 45 per cent turnout of the electorate was registered in the election, high considering the poor weather conditions and the spring vacation. Unofficially, 19,596 of the city’s 42,603 registered voters cast ballots for councilmen yesterday.

Yesterday’s outcome was particularly pleasing to City GOP Chairman Brian Connelly who was himself the victim of an upset last year. He credited the victory to “Democratic” techniques — working hard and getting the voters out.

Democratic Mayor Robert J. Harris, who must preside over the divided council, was critical of the path he said Republicans trod to victory.

“A minority party seeking to regain power can take the responsible course of trying to propose specific measures that will handle these problems better than the majority’s measures have done,” Harris said. “Or it can take the low road, preying on the fears, stating the facts unfairly, castigating the incumbents because of the mere existence of the problems, and avoiding any concrete discussion of how the minority would have handled things differently.”

Stating Vice President Spiro Agnew “is the national symbol of the low road,” Harris said the local GOP campaign “was right out of Spiro Agnew’s book.” He said, “This kind of approach to politics may win short-term victories for a political party, but it is ultimately destructive of the quality of the society, since it adds nothing to the public debate about what measures are wise and it breeds endless bitterness.”

The mayor then said he hopes the two parties can work together in the coming year to come to grips with the problems facing Ann Arbor Cappaert, a major target in the Republican road to victory, was also critical of the GOP campaign, stating the “so-called silent majority is afraid of the future and the Republicans played on this fear by putting it into words in advertising.”

Republicans had what they called a simpler explanation for the election outcome. “They (the voters) have had enough!”

This was the theme of the victory party last night as well as during the city campaign. Republicans conducted a campaign of attack on the Democratic record, leaning heavily to the “law and order” issue.

The troubles for the Democrats started shortly after they assumed control last year with the S. University disturbances  and the controversy over the “rock” concerts.

Falling into the GOP campaign as neat fashion were the recent disorders on the University campus.

Explanations for the victory — or defeat — were a dime a dozen last night, but by and large the GOP viewed it as a return to “normalcy” in city elections.

Up until last year, the Republicans had controlled the governing body for more than 35 years.

Whether the GOP can regain control next year is a matter of conjecture. Following the 1970 census, the city’s ward boundaries must be redrawn based on population. The Democrats, with a majority on the council, will have the major say on how those boundary lines are drawn. This could have a significant impact on future elections.