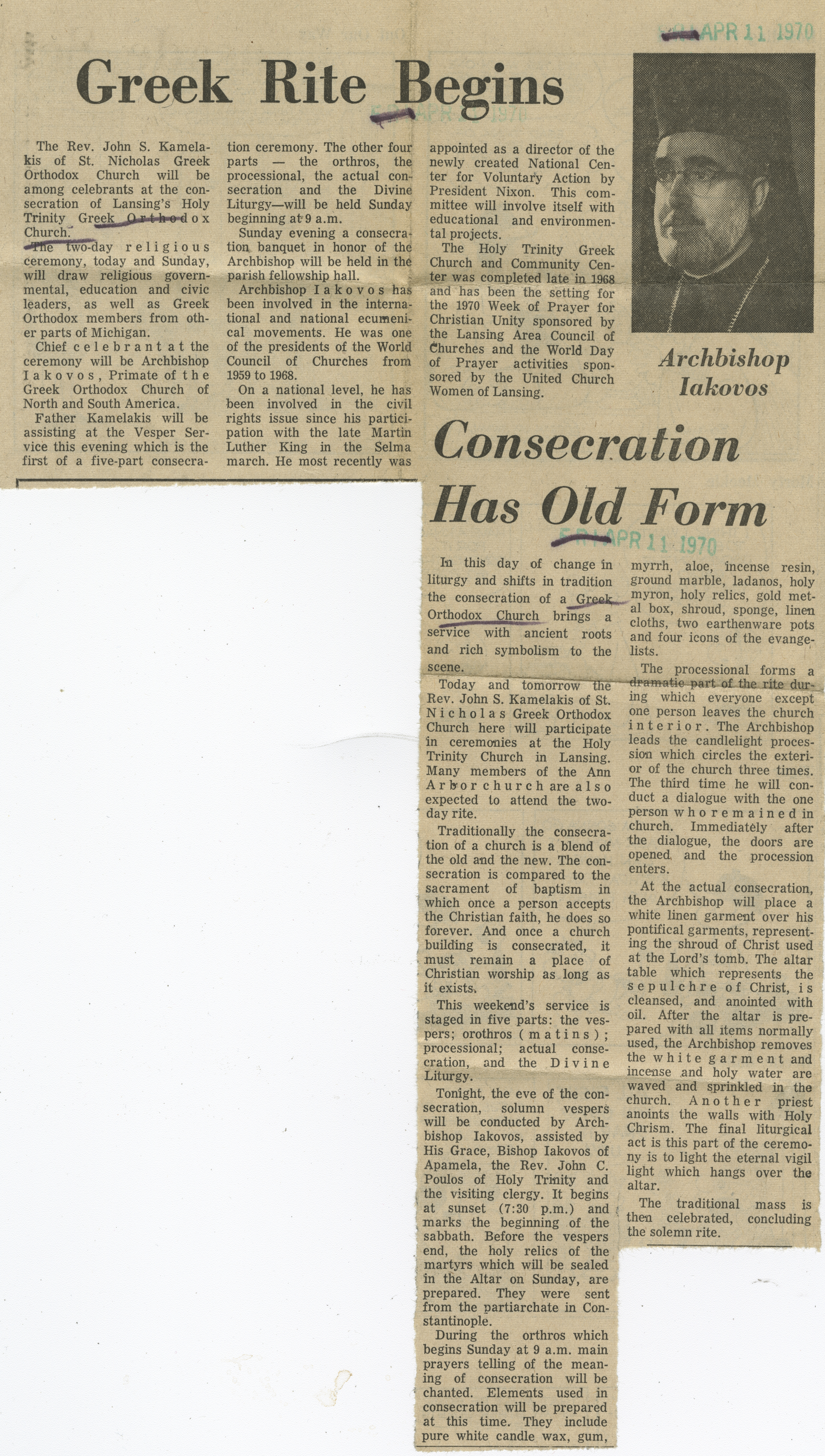 The two-day religious ceremony, today and Sunday, will draw religious governmental, education and civic leaders, as well as Greek Orthodox members from other parts of Michigan.

Chief celebrant at the ceremony will be Archbishop Iakovos, Primate of the Greek Orthodox Church of North and South America.

Father Kamelakis will be assisting at the Vesper Service this evening which is the first of a five-part consecration ceremony. The other four parts -- the orthros, the processional, the actual consecration and the Divine Liturgy -- will be held Sunday beginning at 9 a.m.

Sunday evening a consecration banquet in honor of the Archbishop will be held in the parish fellowship hall.

Archbishop Iakovos has been involved in the international and national ecumenical movements. He was one of the presidents of the World Council of Churches from 1959 to 1968.

On a national level, he has been involved in the civil rights issue since his participation with the late Martin Luther King in the Selma march. He most recently was appointed as a director of the newly created National Center for Voluntary Action by President Nixon. This committee will involve itself with educational and environmental projects.

The Holy Trinity Greek Church and Community Center was completed late in 1968 and has been the setting for the 1970 Week of Prayer for Christian Unity sponsored by the Lansing Area Council of Churches and the World Day of Prayer activities sponsored by the United Church Women of Lansing.

In this day of change in liturgy and shifts in tradition the consecration of a Greek Orthodox Church brings a service with ancient roots and rich symbolism to the scene.

Today and tomorrow the Rev. John S. Kamelakis of St. Nicholas Greek Orthodox Church here will participate in ceremonies at the Holy Trinity Church in Lansing. Many members of the Ann Arbor church are also expected to attend the two-day rite.

Traditionally the consecration of a church is a blend of the old and the new. The consecration is compared to the sacrament of baptism in which once a person accepts the Christian faith, he does so forever. And once a church building is consecrated, it must remain a place of Christian worship as long as it exists.

This weekend’s service is staged in five parts: the vespers; orothros (matins); processional; actual consecration, and the Divine Liturgy.

Tonight, the eve of the consecration, solumn vespers will be conducted by Archbishop Iakovos, assisted by His Grace, Bishop Iakovos of Apamela, the Rev. John C. Poulos of Holy Trinity and the visiting clergy. It begins at sunset (7:30 p.m.) and marks the beginning of the sabbath. Before the vespers end, the holy relics of the martyrs which will be sealed in the Altar on Sunday, are prepared. They were sent from the partiarchate in Constantinople.

During the orthros which begins Sunday at 9 a.m. main prayers telling of the meaning of consecration will be chanted. Elements used in consecration will be prepared at this time. They include pure white candle wax, gum, myrrh, aloe, incense resin, ground marble, ladanos, holy myron, holy relics, gold metal box, shroud, sponge, linen cloths, two earthenware pots and four icons of the evangelists.

The processional forms a dramatic part of the rite during which everyone except one person leaves the church interior. The Archbishop leads the candlelight procession which circles the exterior of the church three times. The third time he will conduct a dialogue with the one person who remained in church. Immediately after the dialogue, the doors are opened, and the procession enters.

At the actual consecration, the Archbishop will place a white linen garment over his pontifical garments, representing the shroud of Christ used at the Lord’s tomb. The altar table which represents the sepulchre of Christ, is cleansed, and anointed with oil. After the altar is prepared with all items normally used, the Archbishop removes the white garment and incense and holy water are waved and sprinkled in the church. Another priest anoints the walls with Holy Chrism. The final liturgical act is this part of the ceremony is to light the eternal vigil light which hangs over the altar.

The traditional mass is then celebrated, concluding the solemn rite.