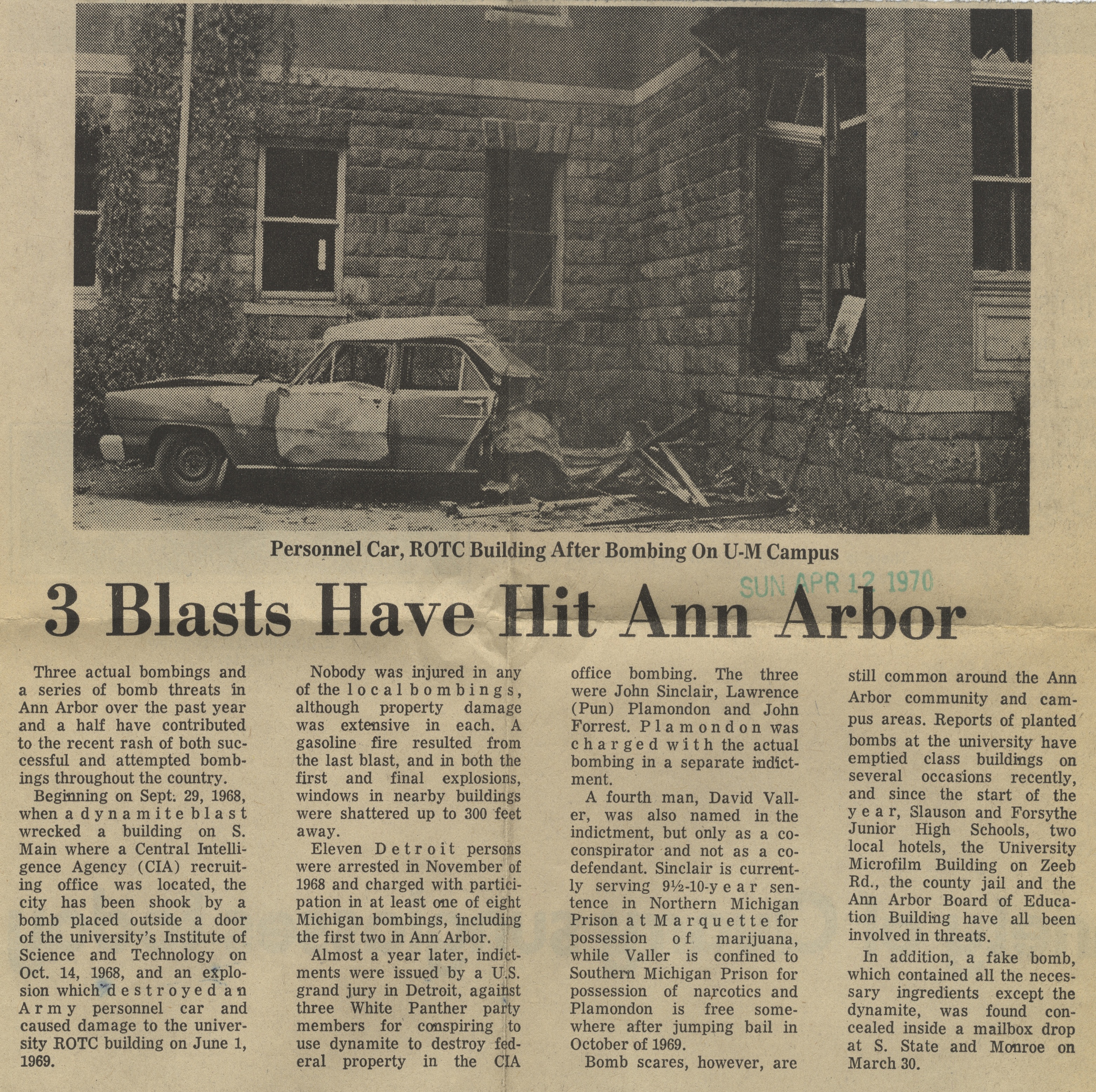 Three actual bombings and a series of bomb threats in Ann Arbor over the past year and a half have contributed to the recent rash of both successful and attempted bombings throughout the country.

Beginning on Sept. 29, 1968, when a dynamite blast wrecked a building on S. Main where a Central Intelligence Agency (CIA) recruiting office was located, the city has been shook by a bomb placed outside a door of the university’s Institute of Science and Technology on Oct. 14, 1968, and an explosion which destroyed an Army personnel car and caused damage to the university ROTC building on June 1, 1969.

Nobody was injured in any of the local bombings, although property damage was extensive in each. A gasoline fire resulted from the last blast, and in both the first and final explosions, windows in nearby buildings were shattered up to 300 feet away.

Eleven Detroit persons were arrested in November of 1968 and charged with participation in at least one of eight Michigan bombings, including the first two in Ann Arbor.

Almost a year later, indictments were issued by a U,S. grand jury in Detroit, against three White Panther party members for conspiring to use dynamite to destroy federal property in the ClA office bombing. The three were John Sinclair, Lawrence (Pun) Plamondon and John Forrest. Plamondon was charged with the actual bombing in a separate indictment.

A fourth man, David Valler, was also named in the indictment, but only as a coconspirator and not as a codefendant. Sinclair is currently serving 9 1/2 - 10 year sentence in Northern Michigan Prison at Marquette for possession o f marijuana, while Valler is confined to Southern Michigan Prison for possession of narcotics and Plamondon is free somewhere after jumping bail in October of 1969.

Bomb scares, however, are still common around the Ann Arbor community and campus areas. Reports of planted bombs at the university have emptied class buildings on several occasions recently, and since the start of the year, Slauson and Forsythe Junior High Schools, two local hotels, the University Microfilm Building on Zeeb Rd., the county jail and the Ann Arbor Board of Education Building have all been involved in threats.

In addition, a fake bomb, which contained all the necessary ingredients except the dynamite, was found concealed inside a mailbox drop at S. State and Monroe on March 30.