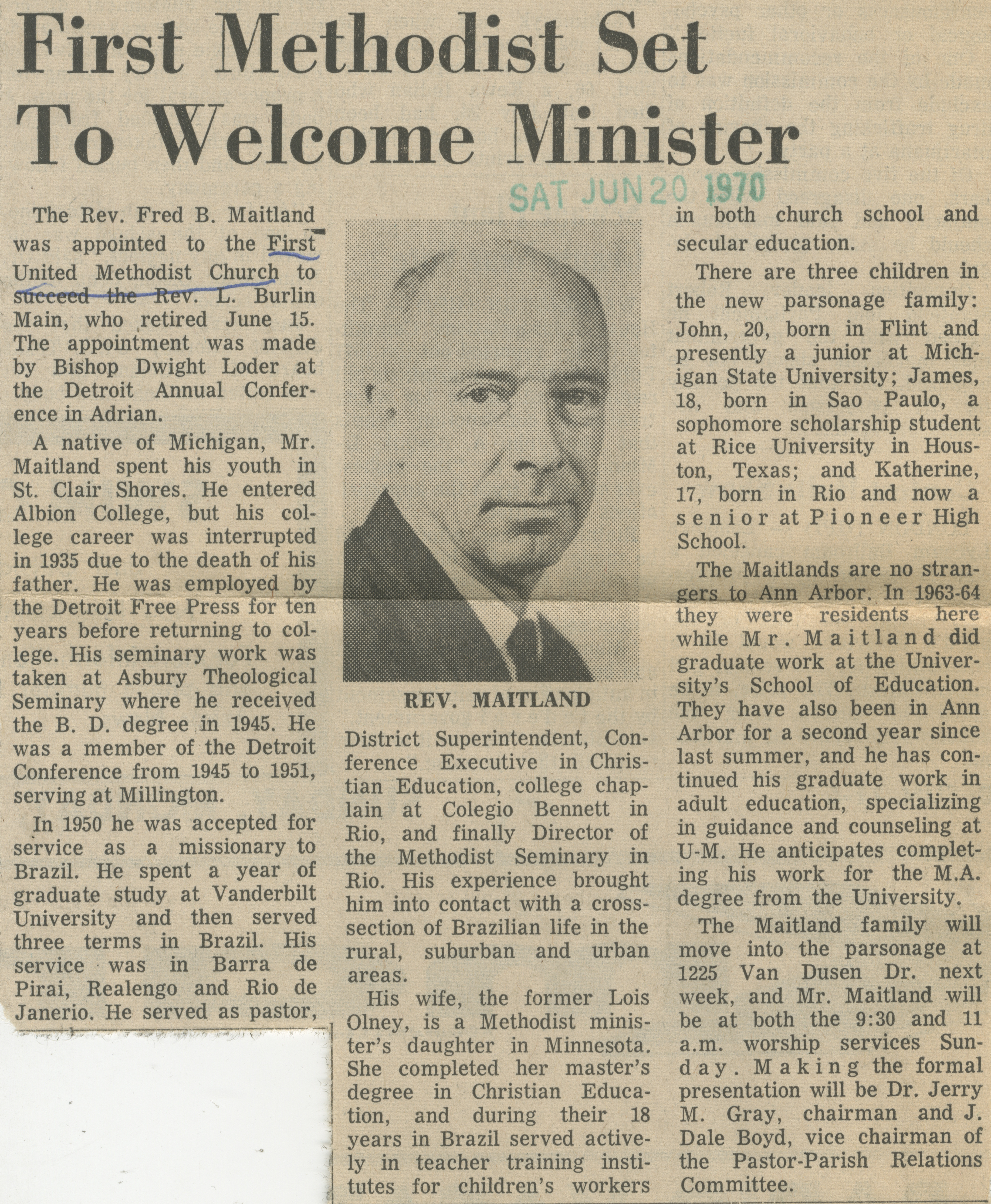 The Rev. Fred B. Maitland was appointed to the First United Methodist Church to succeed the Rev. L. Burlin Main, who retired June 15. The appointment was made by Bishop Dwight Loder at the Detroit Annual Conference in Adrian.

A native of Michigan, Mr. Maitland spent his youth in St. Clair Shores. He entered Albion College, but his college career was interrupted in 1935 due to the death of his father. He was employed by the Detroit Free Press for ten years before returning to college. His seminary work was taken at Asbury Theological Seminary where he received the B. D. degree in 1945. He was a member of the Detroit Conference from 1945 to 1951, serving at Millington.

In 1950 he was accepted for service as a missionary to Brazil. He spent a year of graduate study at Vanderbilt University and then served three terms in Brazil. His service was in Barra de Pirai, Realengo, and Rio de Janerio. He served as pastor, District Superintendent, Conference Executive in Christian Education, college chaplain at Colegio Bennett in Rio, and finally Director of the Methodist Seminary in Rio. His experience brought him into contact with a cross-section of Brazilian life in the rural, suburban, and urban areas.

His wife, the former Lois Olney, is a Methodist minister’s daughter in Minnesota. She completed her master’s degree in Christian Education, and during their 18 years in Brazil served actively in teacher training institutes for children’s workers in both church school and secular education.

There are three children in the new parsonage family: John, 20, born in Flint and presently a junior at Michigan State University; James, 18, born in Sao Paulo, a sophomore scholarship student at Rice University in Houston, Texas; and Katherine, 17, born in Rio and now a senior at Pioneer High School.

The Maitlands are no strangers to Ann Arbor. In 1963-64 they were residents here while Mr. Maitland did graduate work at the University’s School of Education. They have also been in Ann Arbor for a second year since last summer, and he has continued his graduate work in adult education, specializing in guidance and counseling at U-M. He anticipates completing his work for the M.A. degree from the University.

The Maitland family will move into the parsonage at 1225 Van Dusen Dr. next week, and Mr. Maitland will be at both the 9:30 and 11 a.m. worship services Sun-day. Making the formal presentation will be Dr. Jerry M. Gray, chairman and J. Dale Boyd, vice chairman of the Pastor-Parish Relations Committee.