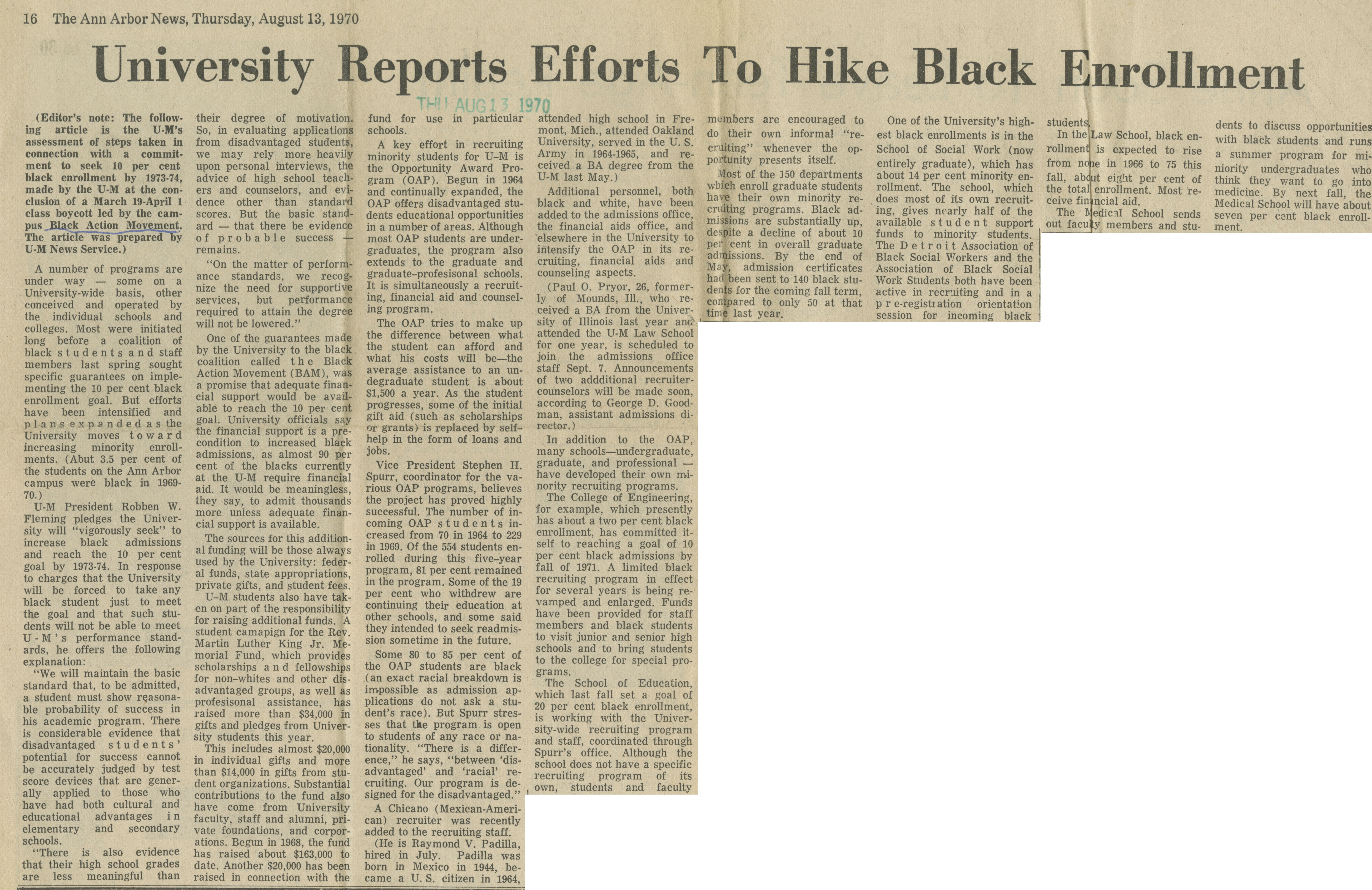 (Editor's note: The following article is the U-M’s assessment of steps taken in connection with a commitment to seek 10 per cent black enrollment by 1973-74, made by the U-M at the conclusion of a March 19-ApriI 1 class boycott led by the campus Black Action Movement. The article was prepared by U-M News Service.)

A number of programs are under way — some on a University-wide basis, other conceived and operated by the individual schools and colleges. Most were initiated long before a coalition of black students and staff members last spring sought specific guarantees on implementing the 10 per cent black enrollment goal. But efforts have been intensified and plans expanded as the University moves toward increasing minority enrollments. (Abut 3.5 per cent of the students on the Ann Arbor campus were black in 1969-70.)

U-M President Robben W. Fleming pledges the University will “vigorously seek” to increase black admissions and reach the 10 per cent goal by 1973-74. In response to charges that the University will be forced to take any black student just to meet the goal and that such students will not be able to meet U-M’s performance standards, he offers the following explanation:

“We will maintain the basic standard that, to be admitted, a student must show reasonable probability of success in his academic program. There is considerable evidence that disadvantaged students’ potential for success cannot be accurately judged by test score devices that are generally applied to those who have had both cultural and educational advantages in elementary and secondary schools.

“There is also evidence that their high school grades are less meaningful than their degree of motivation. So, in evaluating applications from disadvantaged students, we may rely more heavily upon personal interviews, the advice of high school teachers and counselors, and evidence other than standard scores. But the basic standard — that there be evidence of probable success — remains.

“On the matter of performance standards, we recognize the need for supportive services, but performance required to attain the degree will not be lowered.”

The sources for this additional funding will be those always used by the University: federal funds, state appropriations, private gifts, and student fees.

U-M students also have taken on part of the responsibility for raising additional funds. A student campaign for the Rev. Martin Luther King Jr. Memorial Fund, which provides scholarships and fellowships for non-whites and other disadvantaged groups, as well as professional assistance, has raised more than $34,000 in gifts and pledges from University students this year.

This includes almost $20,000 in individual gifts and more than $14,000 in gifts from student organizations. Substantial contributions to the fund also have come from University faculty, staff and alumni, private foundations, and corporations. Begun in 1968, the fund has raised about $163,000 to date. Another $20,000 has been raised in connection with the fund for use in particular schools.

A key effort in recruiting minority students for U-M is the Opportunity Award Program (OAP). Begun in 1964 and continually expanded, the OAP offers disadvantaged students educational opportunities in a number of areas. Although most OAP students are undergraduates, the program also extends to the graduate and graduate-professional schools. It is simultaneously a recruiting, financial aid and counseling program.

The OAP tries to make up the difference between what the student can afford and what his costs will be—the average assistance to an undergraduate student is about $1,500 a year. As the student progresses, some of the initial gift aid (such as scholarships or grants) is replaced by self-help in the form of loans and jobs.

Vice President Stephen H. Spurr, coordinator for the various OAP programs, believes the project has proved highly successful. The number of incoming OAP students increased from 70 in 1964 to 229 in 1969. Of the 554 students enrolled during this five-year program, 81 per cent remained in the program. Some of the 19 per cent who withdrew are continuing their education at other schools, and some said they intended to seek readmission sometime in the future.

Some 80 to 85 per cent of the OAP students are black (an exact racial breakdown is impossible as admission applications do not ask a student’s race). But Spurr stresses that the program is open to students of any race or nationality. “There is a difference,” he says, “between ‘disadvantaged’ and ‘racial’ recruiting. Our program is designed for the disadvantaged.”

A Chicano (Mexican-American) recruiter was recently added to the recruiting staff.

Additional personnel, both black and white, have been added to the admissions office, the financial aids office, and elsewhere in the University to intensify the OAP in its recruiting, financial aids and counseling aspects.

(Paul O. Pryor, 26, formerly of Mounds, Ill., who received a BA from the University of Illinois last year and attended the U-M Law School for one year, is scheduled to join the admissions office staff Sept. 7. Announcements of two additional recruiter-counselors will be made soon, according to George D. Goodman, assistant admissions director.)

In addition to the OAP, many schools—undergraduate, graduate, and professional — have developed their own minority recruiting programs.

The College of Engineering, for example, which presently has about a two per cent black enrollment, has committed itself to reaching a goal of 10 per cent black admissions by fall of 1971. A limited black recruiting program in effect for several years is being revamped and enlarged. Funds have been provided for staff members and black students to visit junior and senior high schools and to bring students to the college for special programs.

The School of Education, which last fall set a goal of 20 per cent black enrollment, is working with the University-wide recruiting program and staff, coordinated through Spurr’s office. Although the school does not have a specific recruiting program of its own, students and faculty members are encouraged to do their own informal “recruiting” whenever the opportunity presents itself.

Most of the 150 departments which enroll graduate students have their own minority recruiting programs. Black admissions are substantially up, despite a decline of about 10 per cent in overall graduate admissions. By the end of May, admission certificates have been sent to 140 black students for the coming fall term, compared to only 50 at that time last year.

One of the University’s highest black enrollments is in the School of Social Work (now entirely graduate), which has about 14 per cent minority enrollment. The school, which does most of its own recruiting, gives nearly half of the available student support funds to minority students. The Detroit Association of Black Social Workers and the Association of Black Social Work Students both have been active in recruiting and in a pre-registration orientation session for incoming black students.

In the Law School, black enrollment is expected to rise from none in 1966 to 75 this fall, about eight per cent of the total enrollment. Most receive financial aid.

The Medical School sends out faculty members and students to discuss opportunities with black students and runs a summer program for minority undergraduates who think they want to go into medicine. By next fall, the Medical School will have about seven per cent black enrollment.